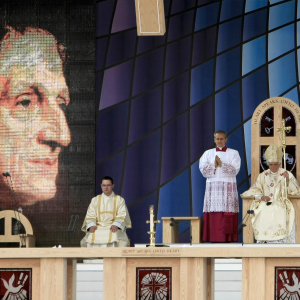 After an extensive local investigation, the Archdiocese of Chicago has forwarded to the Vatican a possible miracle attributed to the intercession of John Henry Cardinal Newman. If it is sustained by the Congregation for Causes of Saints, it would be the second miracle necessary for his canonisation. The case involves a Catholic mother who survived a life-threatening pregnancy after praying to Newman. Her physicians have testified that they cannot explain her sudden and explicable cure. The Roman postulator for Newman’s cause, Dr. Andrea Ambrosi, declined to comment on the miracle unless and until it is approved by the Congregation’s medical board and panel of theologians and officially promulgated by Pope Francis. This is not surprising: a previous miracle cause from Mexico,

Comment by: FrankTrades
My high school in Boston was Newman School for Boys, now Newman Prep. Miracles there were commonplace for us "average" boys served by that institution. -Alumnus, University if Notre Dame, '71
Next
Article