Raised to the altars: one who fell for the poor 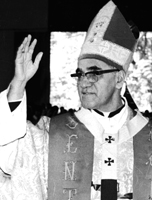 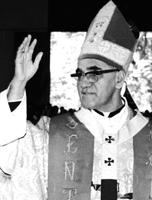 A champion of the poor or someone mixed up in politics? A man who died for the faith or because he was a political inconvenience? Archbishop Oscar Romero’s beatification today confirms his stature and illuminates his model of holiness

The beatification of the slain Oscar Romero, Archbishop of San Salvador, in his own city today, moves him one step closer to receiving the title long ago bestowed by the acclamation of his people: “San Romero de los Americas”. The honouring of the man comes 35 years after he was gunned down as he celebrated Mass in the chapel of a hospital, having preached a sermon the day before in which he called upon Salvadorean soldiers, as Christians, to stop carrying out the Government’s repression of the people, and spoken out continuously about the abuse of human rights and the plight of the poor.
As the first bishop murdered at the altar since Thomas Becket in the twelfth century, Archbishop Romero would seem to have an easy claim on most definitions of martyrdom. For Romero, who clearly anticipated his fate, there was never any doubt as to the meaning of such a death. In an interview two weeks before his assassination, he said, “I have frequently been threatened with death … Martyrdom is a great gift from God that I do not believe I have earned. But if God accepts the sacrifice of my life then may my blood be the seed of liberty and a sign of the hope that will soon become a reality … A bishop will die, but the Church of God – the people – will never die.”

There are inevitably symbolic or even political considerations involved in any canonisation, extending beyond the selection of saints to the interpretation of their lives: what is the gospel message that this life proclaims? What significance does it hold for the Church of our time and for the future?
Within days of Romero’s death, there were different messages about Romero. The crowd of 250,000 at his funeral was seen by some as a demonstration; Cardinal Ernesto Corripio y Ahumada, the personal delegate of John Paul II, said at the funeral that Romero was a “beloved, peacemaking man of God” and that “his blood will give fruit to brotherhood, love and peace”.

No doubt since then there have been expli­citly political considerations at play in the long delay of his beatification. Many influential prelates in Latin America and Rome felt that the canonisation of Romero would be “utilised” by the Left, that he would be the poster boy for liberation theology, and thus promote div­isions in the Church. There were also supporters of the cause who insisted that Romero was wrongly identified with liberation theology, that he was in fact a traditional bishop, a man of prayer, and that these features – and not the circumstances of his death – should be emphasised. But there were also theological issues at stake. These concerned the particular criteria for martyrdom, which indicate that a martyr’s death must be prompted by “hatred of the faith” – odium fidei.

This condition served to characterise the martyrs of the English Reformation, as well as victims of persecution in Japan, Vietnam and revolutionary France. It was also applied to the targets of anti-Catholic persecution in Spain, Mexico and various Communist countries. But it is a condition that had not, up to this point, been extended to any of the tens of thousands of Christians – whether priests, nuns, laypeople or bishops – killed by the ­military, death squads or other agents of national security in Latin America during the bloody decades of the 1970s and 1980s. Certainly, there was a willingness, as expressed by Benedict XVI, to recognise in Romero “an important witness of the faith, a man of great Christian virtue”. And yet it is striking, in the case of Romero and all the others he ­represents, how much church officials have seemed to choke over the “M word”.

Last autumn, Pope Francis broached this question: “What I would like is a clarification about martyrdom in odium fidei, whether it can occur either for having confessed the Creed or for having done the works which Jesus commands with regard to one’s neighbour.” In fact, there were precedents for enlarging the definition of martyrdom. Pope John Paul II was able to term St Maximilian Kolbe a “martyr for charity” for accepting death in the place of a fellow inmate at Auschwitz. So, in an ­earlier time, St Maria Goretti could be termed a “martyr for chastity”, when she died during an attempted rape. Recently, a Sicilian priest, Pino Puglisi, who was killed for standing up to the Mafia, was beatified by Benedict XVI as a martyr who laid down his life for the ­evangelical virtues of truth and justice.

And now, in the case of Romero as well, the question about his martyrdom has apparently been answered. In February of this year Pope Francis, acting on the recommendation of the Congregation for the Causes of Saints, authorised a decree of martyrdom for Archbishop Oscar Romero, thus clearing the way for his beatification today. As Archbishop Vincenzo Paglia, the postulator for Romero’s cause, observed, his assassination “was not caused by motives that were simply political, but by hatred for a faith that, imbued with charity, would not be silent in the face of the injustices that relentlessly and cruelly slaughtered the poor and their defenders”.

Paglia’s remarks are significant because they address a specific obstacle that had shadowed the cause of Romero: the claim that Romero was not killed “in hatred of the faith”, but because he got himself mixed up in politics. Archbishop Paglia said that the Vatican received “kilos” of letters along these lines. They argued that Romero wasn’t targeted by his killers – presumably self-proclaimed Catholics – because they hated his faith, but because he acted and sounded like a subversive.

Of course, in El Salvador in those years, it did not take much to sound like a subversive. Anyone who stood up for human rights or who challenged an unjust social order, was classified as a subversive, and thousands paid the price. As Jesuit Fr Rutilio Grande observed before his own assassination, if “Jesus himself came across the border of Chalatenango, they wouldn’t let him in.” Romero understood what was at stake. As he said, “One who is committed to the poor must risk the same fate as the poor. And in El Salvador we know what the fate of the poor signifies: to disappear, to be tortured, to be captive and to be found dead.”

The Vatican might have skirted the question of “politics” by focusing on Romero’s virtues as a pious and holy churchman. And yet that is not what has happened. By the decree of martyrdom the Church has recognised that his death, like that of Jesus, was a consequence of his witness to the Kingdom of God – or, if you will, his faithful proclamation of the Gospel. In El Salvador, an overwhelmingly Catholic country named for the Saviour, Romero and thousands of other martyrs were not killed simply for confessing membership in the Church or for proclaiming the Creed. They died because their understanding of the Gospel put them in solidarity with the oppressed and in opposition to the structures of injustice. And in a society animated by “odium pauperum”, hatred of the poor, such faith caused them, as Romero put it, to take on “the same fate as the poor”.

No doubt, in preaching a gospel of justice, peace and solidarity, Romero was regarded by many as a traitor. Among his fellow bishops there were doubtless those who believed that Romero should have preached the Gospel in a way that was less divisive. He might have done this. And thus he might have lived. As Romero noted in an address in Louvain, “Not any and every priest has been persecuted, not any and every institution has been attacked” – only “that part of the Church which has placed itself at the side of the people and has gone to their defence”.

Perhaps it is significant that the beatification of Romero, and the recognition of his status as a martyr, has awaited the pontificate of Pope Francis. Thus, his beatification serves a wider vision of renewal and ecclesial conversion. To name and recognise the martyrdom of Romero is not simply to nullify the odium fidei of his killers. To name Romero a martyr, and not simply “a man of great Christian virtue”, is to make a great leap of amor fidei – a love of the faith he embodied, a love for “the Church of God – that is, the people” for which he offered his life. To recognise Romero as a martyr is to embrace his model of holiness and his proclamation of the Gospel without compromise or apologies.

We might recall that for Romero a great turning point in his ministry came with the murder of his friend, Rutilio Grande, which occurred shortly after his installation as archbishop. It was in this event, and his choice properly to name, recognise and love Grande’s faithful witness, that Romero embarked on his own road to Calvary. In his beatification, Romero continues to walk ahead of the Church, beckoning us forward on the path to Jerusalem, which is the path of Jesus, clearing the way towards a Church which is, in Pope Francis’ words, “poor and for the poor”.

Robert Ellsberg is editor and publisher of Orbis Books. He was a speaker at the conference on Archbishop Romero held at the University of Notre Dame, Indiana, in September 2014.

This guy deserved to be raised long ago.
As for Cardinal Pell he should be SACKED and dispatched immediately to a monastery in a 3rd country for all his cover-ups in Ballarat, Melbourne and Australia generally. When senior clerics like bishops, archbishops and cardinals foul up they are just spirited off to the Vatican where they receive IMMUNITY against prosecution. 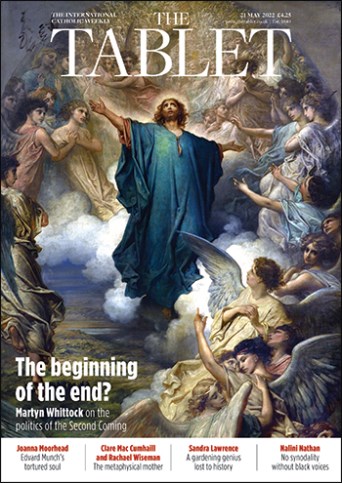