‘There is a new open space’

Sisters of the internet age 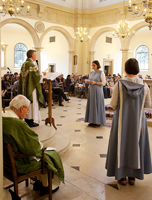 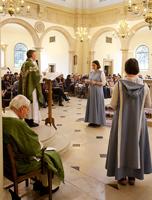 After a long period of decline, the number of women entering religious life is rising again. Are we seeing the ‘democratisation of spirituality’, with their work becoming more relevant and social media making it more visible? In the past, individual orders of women Religious would rely on print advertising and a broad awareness of their work to attract new vocations. Now, Facebook, Twitter, Catholic youth gatherings and discernment groups are giving them the visibility they once had in schools and hospitals – and women are watching and responding. Forty-five women entered religious communities in 2014, a 50 per cent increase on the previous year. Sr Lynne Baron, vocations director for the Faithful Companions of Jesus (FCJ) for the Province of Europe, says that social me

I too agree! It is the person that gives value; numbers and statistics have to be read with great attention. Each person---an image of God---has a call, or calls. We always evolve and God's energy and Spirit recreate us, sometimes sending us to very new and surprising ways. That vocations to religious life in England and Wales have grown could also be a reflection of a new generation that comes out of a culture of massive human movements; younger people being more flexible and having a lot of contacts with other cultures. The World Youth Meetings have also contributed a lot in ways that people discern the present and the future. It seems to me that with advanced developments in spirituality and discernment have created a space in many countries that allows the searcher to look at the religious as normal and ordinary human beings; products of society and biology. It breaks the 'daunting' experiences that many may have experienced in the past. Having said all this, i think we just have to accept that God is God and we are only instruments and vessels. It is God's Kingdom that counts, and God will find ways of making it a reality despite the human limitations, despite the politics of tradition and power.
A. Beebwa
[email protected]