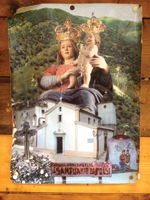 No more pews for the godfathers

Mass for men condemned to isolation until death

by John Larsen
The mafiosi in Rebibbia prison, on the periphery of Rome, are totally isolated in individual cells where they will probably remain until after they die, writes John Larsen. They are often middle-aged men. It would be safe to say that almost everyone is relieved that they remain right where they are – in the highest security blocks in the bowels of the prison. Is there any appropriate Christian response to this situation or do we just leave them to languish in the guilt of their atrocities against society as they await the Resurrection on the last day?Each cell has two adjoining doors – one of cast iron, with a small shutter; the other with bars. For the men inside, their only contact with the outside world comes via a television set and the small group of prison personnel who