Open to the voice of the future 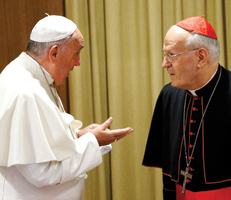 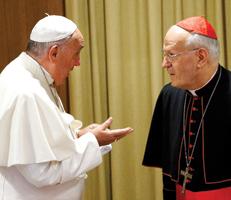 The ground rules for the Synod on the Family, as laid down by Pope Francis, allow not just debate but collegial decision-making. Francis is in listening mode – an attitude, he insists, that requires humility. At this stage, the road ahead is intriguingly unclear

Since he stepped out on to the balcony in St Peter’s Square 19 months ago, Pope Francis has radically improved perceptions of the Church.

He has won over the world’s media and embarked on a dialogue with Italy’s most prominent atheist. As The Tablet went to press, rumours were circulating that the Pope might win the Nobel Peace Prize.

But while Francis has been successful in his witness to the world, the internal difficulties in the Church remain. In many parts of the world, particularly in the West, a large gap has opened up between teaching on sexuality and the lived experiences of ordinary Catholics.

By calling two synods on the family, with the first opening in Rome this week, those tensions came sharply into focus. Yet, as the instrumentum laboris – the synod’s working document which brought together the experiences of local churches – points out, most young people still want to marry and have children as the Church encourages them to do. At a prayer vigil on the eve of the synod’s opening, Francis put the challenge like this: “How can we propose with credibility the Good News on the family?” The credibility of what the Church teaches is something that appears to be on the Synod Fathers’ minds.

Early sessions in the Paul VI Hall in the Vatican heard bishops say that the language employed by the Church is at times too harsh, with one saying that the phrases “intrinsically disordered” and “contraceptive mentality” were unhelpful. Both have appeared in Vatican documents. In 1986 the then Cardinal Joseph Ratzinger, prefect of the Congregation for the Doctrine of the Faith, wrote that homosexual orientation “must be seen as an objective disorder” while the phrase “contraceptive mentality” appeared in Pope John Paul II’s Apostolic Exhortation following the last Synod on the Family in 1980. Cardinal Wilfrid Napier of Durban, South Africa, told me: “When we talk about ‘irregular situations’ are we putting people off? Is there another way of putting it and a new approach that may be more advantageous?”

Francis has, of course, urged the Synod Fathers to speak boldly without fear and this appears to be working. Cardinal Vincent Nichols told reporters on Tuesday that it was noticeable that bishops were speaking from their “pastoral perspectives rather than academic studies”. The New Zealand Archbishop of Wellington, John Dew, added: “The fact that he said that was so helpful and people are speaking clearly.”

In his apostolic exhortation Evangelii Gaudium, Pope Francis says “realities are greater than ideas” and in his homily to open the synod he pointed out that it is not being held “to see who is more intelligent”.

Helping the Synod Fathers to understand the reality on the ground are the lay couples who address them at the start of each session. And they are not afraid to present them with uncomfortable truths. “We know countless divorced adults who have joined other faith communities because they do not feel welcomed in the Catholic Church,” Jeff and Alice Henzen of the Diocese of La Crosse in the United States said. “And our hearts ache for single parents who struggle to care for their children.”

The synod is being told that rather than setting out where people have gone wrong it should instead try to meet them where they are. The Church, Synod Father Fr Antonio Spadaro SJ explained, should not be a lighthouse beaming out the truth but holding a torch and walking with people. It is in this context that the term “graduality” is being widely used. The principle of graduality has emerged at the synod as a way for the Church to respond to difficult pastoral situations. Applied to theology, the concept says that a person can grow closer to church teaching over the course of their lives. Examples would be a cohabiting couple that decides get married or, as Benedict XVI pointed out in an interview, a male prostitute infected with HIV who uses a condom. The latter knows that infecting someone with HIV is wrong and over time could come to recognise the Church’s teaching on sex.

Cardinal Nichols described graduality, which also featured at the Synod on the Family in 1980, as “a law of pastoral moral theology which permits and encourages people, all of us, to take one step at a time in our search for holiness in our lives”. He pointed out that the idea should not be taken to mean that different moral laws apply at different times in a person’s life. Traditionally understood, graduality puts a person on a path to fully accepting church teaching.

Cardinal Reinhard Marx, chairman of the German Bishops’ Conference and a member of the Council of Cardinals that advises the Pope, referred to graduality in his latest remarks in support of Cardinal Walter Kasper’s proposal for allowing Communion for divorced and remarried Catholics. He said there is graduality “in the way to the sacrament”. And according to a summary of discussions on Tuesday, there is a hope that “the synod may infuse with courage and hope even imperfect forms of family, so that their value may be recognised, according to the principle of graduality”.

The summary of discussions yesterday also pointed out that the Synod Fathers want to see the Church as “magnetic”, saying “it must work by attraction, with an attitude of friendship towards the world.”

There are, however, those in the synod who are wary of such an approach. Truth, they argue, cannot be sacrificed for mercy and there is no steer yet about whether there will be any opening for allowing Communion for divorced and remarried Catholics. In his opening remarks to the synod, Hungarian Cardinal Péter Erdö, the relator general at the synod, said the synod was discussing pastoral, not doctrinal, questions, pointing out the impossibility of the Church recognising second marriages. He felt social trends were making it harder for people to understand this.
“Many people today have difficulty in thinking in a logical manner and reading lengthy documents,” he said. The cardinal warned against local churches improvising with “do-it-yourself ministry”.

It is, of course, not just the problems facing the family in the West that the synod is approaching. Each Synod Father – primarily presidents of bishops’ conferences from across the world – submitted a paper to the synod on their experiences of family life. Polygamy, child brides, poverty and migration are just some of the challenges outlined. For his part, Cardinal Napier said he hoped the synod would provide guidelines on how to deal with polygamy. “If there is going to be change in the conditions for receiving communion for people who are in irregular situations how do you regard the ones from Africa, where the woman, a Catholic, marries one man who later takes a second wife?” he asked. “Then what does she do in that situation? These are some of the practical situations I don’t expect the synod to answer but the synod could give us a direction of thinking, of principles.”

Perhaps the most important thing to come out of the synod so far is the trust that Francis is putting in the process. He is a Pope who had direct, first-hand experience of collegial decision-making when he oversaw the writing of the wide-ranging 2007 Aparecida document produced by the Latin American bishops, which focused on evangelisation, social justice and applying pastoral practice to local contexts.

Francis is intending to be present at each session of the synod (apart from Wednesday general audiences); he likes to arrive early and greet people as they come in, fostering a collegial spirit. The Pope is planning to listen to contributions but not to intervene in debates.

In recent years, synods have been criticised for offering little more than an exchange of ideas rather than assisting the Pope with decision-making, as the Second Vatican Council mandated them to do. According to Austen Ivereigh, author of a new papal biography The Great Reformer, the Pope has created a “reformed synod” and is thus “embedding the dynamic of the council permanently in the Church”.

Although it is early days, results already appear to be evident. “This is my fifth synod and it’s a totally different approach,” Archbishop Dew explained. “It’s clear that the teaching on collegiality is close to his [Pope Francis’] heart and he wants to use this Synod to express that and put it into action.”