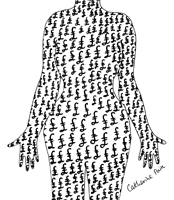 Our wilful blindness let the children down 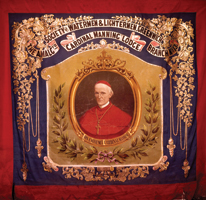 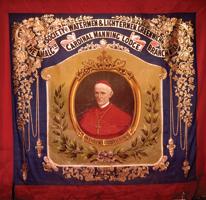 This month, East Enders remember the London Dock Strike, which ended 125 years ago. The unlikely figure at the centre of the negotiations between the dock companies and the strikers’ leaders was a frail 81-year-old cardinal

Among the trade-union paraphernalia in the People’s History Museum in Manchester, there is a banner depicting an unexpected figure: Cardinal Henry Edward Manning. An inscription soars above his determined scarlet frame – “The Amalgamated Society of Watermen and Lightermen, Greenwich Branch” – and beneath it: “Cardinal Manning Lodge”. The banner is testament to the cardinal’s role as a mediator during the Great London Dock Strike, which broke out on 14 August 1889, and shows the great esteem and love with which this remarkable archbishop was regarded – on both sides of the river.

The cardinal agreed to act as a mediator between the strikers’ leaders and the dock owners. He was trusted by both sides and the  “Cardinal’s Peace”, as it was known, brought to an end a period of industrial unrest that had paralysed the whole economy of London. Two years later in the Dublin Review, Manning wrote: “Starving men may be locked out with impunity. The hunger of their wives, the cries of their children, their own want of food, will compel them to come in. It is evident that between a capitalist and a working man there can be no true freedom of contract. The capitalist is invulnerable in his wealth. The working man without bread has no choice but either to agree or to hunger in his hungry home. They forget that when thousands of women and children suffer while they are refusing to grant a penny more in wages, or an hour less in work, there is a wide field of misery caused by their refusal, which prolongs a strike. It is then no private affair, but a pubic evil which excites the public condemnation.”

Manning’s powerful words reveal his thinking on the relationship between capital and labour. He was reflecting on Rerum Novarum (“Of New Things”), the encyclical letter Pope Leo XIII issued that year on “The Condition of the Working Classes”. The Pope’s encyclical is now widely regarded as the cornerstone of the Church’s social teaching. What Manning does not give away is how much the encyclical may have been influenced by what had happened in London.

We know that events surrounding the London Dock Strike had been monitored with great interest at the time in Rome. We know, too, that Rome’s perspective on the dominant social issue of the day – the condition of the working poor – was influenced by the then Archbishop of Westminster. Rerum Novarum itself pointed out: “The condition of the working classes is the pressing question of the hour, and nothing can be of higher interest to all classes of the state than that it should be rightly and reasonably settled.”

The “new thing” addressed in Rerum Novarum was the phenomenon of rapid social change that had been sweeping through Europe. The rise of industrial capitalism was transforming the relationship between workers and employers. A huge gulf in power and wealth was opening up between a privileged minority and the masses, and there was a growing unease, shared by many church ­leaders and theologians, that capitalism was leading to people being treated as commodities that could be bought and sold.

Some years earlier, Manning had publicly decried the starvation-level wages paid to many workers, which effectively kept them as slaves to their work. He called for the formal recognition of working associations, and for a level of mutual aid to support workers. These ideas are echoed with remarkable precision in Rerum Novarum, in which for the first time the Church attempted systematically to set out its thinking on social issues. The encyclical says that it is incumbent upon the Church and her leaders to speak out against exploitation by employers, to ensure that the state is just in its treatment of the poor, and to assert the dignity and rights of all citizens wherever they are under threat. The encyclical also calls for the freedom and the legitimacy of workers to join unions, and says that they should receive support in times of sickness, distress or frailty. It preaches fearlessly that both workers and employers have duties to each other to uphold the integral dignity of work. And, at least 100 years ahead of its time, Rerum Novarum calls for a “just” wage for those who work – enough for them to support a family. It could be the voice of Manning speaking.

Turning to Manning’s actions during the dock strike, there are striking parallels between how he responds to events and what is recommended in the encyclical. The cardinal openly pledged support for the cause of the dockers. He was unflinchingly behind their demand for an increase in the hourly rate of one old penny to sixpence (the “dockers’ tanner”). He could not abide the notorious “call-on” system, which demanded that men desperate for casual work would gather in sheds or pens so that they could be picked out for casual work by a foreman, and he ­supported the union leaders’ demand that no man should be taken on for less than four hours.

It is inspiring to read the testimonies of those who were there about the cardinal’s resolve during the negotiations to reach a ­settlement. Ben Tillett, one of the dockers’ leaders, paid tribute to his personal influence, reflecting: “I could not withstand this gentle old man, who touched so tenderly the heart-strings of his hearers with solemn talk about the sufferings of wives and children, or impress him with a summary of social needs and economic complexities multiplying in the prolongation of the strike. I never look back on that meeting without a sense of nightmare, but there was a final judgement and the ­cardinal won.”

While others walked out of the negotiations, Manning stayed to the end, despite being 81 and very frail. The lessons of the great dock strike are still being learned. In the East End, the East London Communities Organisation (Telco) is a direct result of the legacy of the strike. The same parishes that were active in the strike are still filled with people living in poverty or struggling on low wages.

Telco’s Living Wage Campaign closely ­resembles the cause of the dockers. We still face similar ­challenges to those that we faced in 1889 – rising levels of poverty and ­burgeoning social inequality. Once again, we are coming to terms with the truth that we must organise ourselves towards a common good. Catholic Social Teaching has developed to meet the changing nature of the global economy and of the workplace but its fundamental principles – the dignity of every human being, the preferential option for the poor, the values of solidarity and participation, and the striving for common good – remain the same. Manning’s great gift to us was to show us how to live these ­values through action that is patient, durable and faithful to our Catholic tradition.

The success of the dock strike was crucial to the development of British trade unionism and helped to usher in a new era in relations between capital and labour. Study of Manning’s remarkable life reveals not only his decisive role in the ending of the strike but his influence on the teaching of Rerum Novarum. The East End of London has a good claim to be one of the most significant places in the development of modern industrial relations and of Catholic Social Teaching.

To recognise and honour the end of the strike, Caritas Anchor House and a number of East End parishes have organised a Mass in St Mary and St Michael Church, Commercial Road, Stepney, on 14 September, the eve of the anniversary of the dockers’ return to work 125 years ago. It will be celebrated by Manning’s successor as Archbishop of Westminster, Cardinal Vincent Nichols. The Mass is at 6 p.m., followed by a reception. All are welcome to attend. For more information, please contact Chris Driscoll at: [email protected] or call 020 7476 6062.

Monsignor John Armitage is vicar general of the Diocese of Brentwood, and parish priest of the Royal Docks Parish in Custom House, East London.