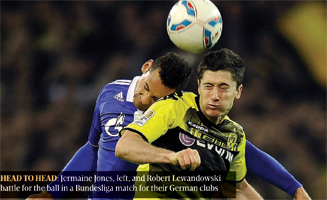 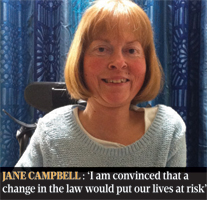 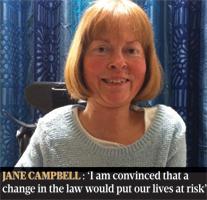 Lord Falconer’s Assisted Dying Bill had its first parliamentary reading last week. It allows doctors to prescribe a lethal dose of drugs to terminally ill people with just six months to live who wish to end their lives. Here, a leading campaigner warns of the dangers to all those with special needs

As a severely disabled woman, I have seen tremendous improvements in so many aspects of disabled people’s lives over the last 50 or so years. True, I was sent to a “special” school but my adult life has benefited from integration. Accessible buildings and public transport, medical and clinical advances and laws designed to enable disabled people to participate fully in society and to receive the care and support we need to live with dignity made that possible.

Alongside countless others, I campaigned for many of these changes. But now I am on the opposite side of the fence, fighting proposed legislation. This time I am convinced that a change in the law would put our lives at risk. Fortunately I am not alone but we are told we are in the minority.

Lord Falconer’s Assisted Dying Bill is the latest attempt to change the law on assisted suicide. Despite the failure of previous efforts to convince parliamentarians that the negatives outweigh the positives, a sizeable lobby is determined to keep bringing back the issue, convinced that a tweak here and a change of phrasing there is all that is needed to shift the balance of opinion in their favour.

In their conviction, they ignore the voices of disabled people and many others, writing us off as bigots who are putting our prejudices before alleviating the suffering of others. Their case appears clear and convincing, and they claim public opinion is with them. They say, surely, when people are near the end of their lives, it is our duty to do what we can to ease their suffering, physical or mental? Surely, too, we should respect their wishes and, anyway, don’t we all have a right to say when and how we die? Am I not entitled to ask, and expect, someone else to help me die if that is my wish?

For those of us arguing for the status quo, the issues are so much more complex. A human life should not end because all the boxes have been ticked. Lord Falconer’s bill states that it only applies to persons defined as “terminally ill” and “reasonably expected to die within six months”. Disabled and older people are told that we have nothing to fear. As we are outside those definitions, the law will not apply to us. Yet this is not true.

Many conditions are life-limiting (such as my own) and whether they are defined as a disability or terminal illness is open to debate. In addition, it doesn’t take much imagination to foresee the likely publicity a year or so down the line for the poor soul “forced to suffer” because his or her condition is outside the definition. The law would then be relaxed, the slippery slope would begin.

Next, if a change in the law is necessary, why should it be for some but not all? If the traffic light on the state-sanctioned ending of life is changed from red to green, surely it cannot be simultaneously red for some and green for others?

That many people fear old age, disability and illness is undoubted and understandable. Often people have seen loved ones, especially parents, grow weaker and come to need care. That can be tough to watch. It is natural to want an alternative, for both oneself and loved ones. However, what is so distressing for me and so many other terminally ill and disabled ­people is that the quick fix of an assisted death is being promoted over the many already available preferable alternatives, which have been essential in my life.

Perhaps that is not surprising given the current negativity towards disabled, terminally ill and older people, often portrayed as scroungers, deserving of cuts to benefits. NHS care has been exposed as inadequate and target-driven, leaving patients suffering. That is nothing compared to the abuse of older people in care and nursing homes exposed by undercover reporters. No wonder so many believe they would be better off dead. But how depressing that distinguished parliamentarians such as Lord Falconer choose to facilitate that belief rather than challenge it.

As someone disabled from birth and reliant upon others my whole life, I know how empowering care can be for both giver and receiver. Everything I have achieved has been with support from others. Indeed, I have only lived as long as I have because of the help I have received from my family, the medical profession, other professionals and assisters, some paid, some not. I am reliant upon numerous interventions every day, including help to get dressed, eat and go to work. Help to turn my ventilator on and turn me over at night. The one thing I am not is “special”. I am like thousands of other disabled, terminally ill and older people, who receive the support they need to live their lives to the full.

WE ARE THANKFUL for the support we get and we believe it should be available to all who need it. It is not. Many do not get it and the impact on their lives is acute. Denied my feeding tube, electrical wheelchair and personal assistance, I too might come to believe I would be better off dead. Left to the sole care of my family, they too would become exhausted (mentally and physically) and believe that too. Whatever they felt, I would feel a burden on them. I might think my assisted death would be best all round.
That is why the Assisted Dying Bill is so misguided and dangerous. For it to pass into law would be the triumph of despair over hope. It says, don’t try to make things better – that’s just too difficult and, anyway, would be futile. It is far better to die now. It will be better for you, your family and society. You are defined by your diagnosis, which is also your death warrant. Society doesn’t want you around any more. Well, I don’t want that ­society and I hope that neither do you.

Baroness Campbell of Surbiton is a former commissioner of the Equality and Human Rights Commission and former chairwoman of the Social Care Institute for Excellence.
She is a patron of the think tank Living and Dying Well.

Couldn't agree more. It would be all too convenient to use this to marginalise the 'unproductive' still further.

There's a common pattern of people reacting in fear to the idea of no longer being in control, and feeling this would give them back some control. But they need to realise it would actually be used to the take the control and choices of many away.

Never give a government an apparently 'moral' reason for withdrawing protection from the vulnerable. Sooner or later, they will grab it with both hands.