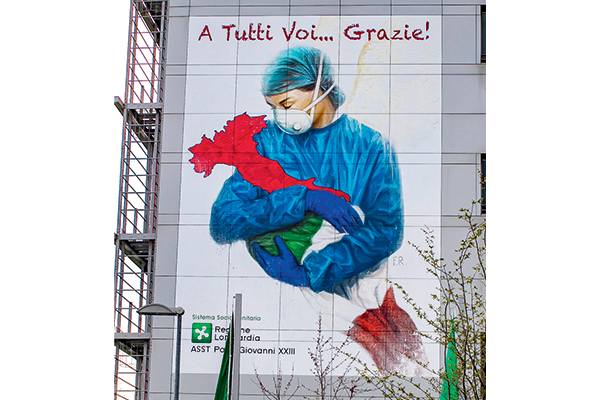 The field hospital is open

Living in lockdown: the coronavirus in Italy

A Scottish writer, who lives alone in the Tuscan town of Poggibonsi, has been observing with respect the response of Italians to a crisis that will scar them and their country

When I got to the supermarket, there was a security guard at the door. He looked at me, and then at the older man who arrived a fraction of a second later. “You’ll have to wait until some people leave,” he said. “Who was here first?”

“This lady,” the man said, and pointed to me.

My Italian wasn’t working well. Stress does that. I smiled a thank you to both of them and stood well back from the door. Behind me, new arrivals began to form a loosely defined queue. I heard them joking with one another as they tried to gauge what “at least a metre apart” actually looks like. It’s surprisingly difficult to judge. To the right of the door, volunteers had placed a handwritten sign offering free grocery delivery to the elderly.

I hadn’t meant to come to the supermarket today. When the Italian premier, Giuseppe Conte, announced the nationwide lockdown, that had been my first, fearful thought: What if the food runs out? Should I get up early and go to the shops? But I’d forced the thought back down. That’s the kind of logic that leads to empty shelves and long, unsanitary lines. If I give into it, I told myself, I’ll be no better than the people I read about who hoard all the loo roll. I can go to the supermarket the next day, or the one after. Stretch out my resources as long as possible and let others go first. That would be the virtuous approach.