Japan – the search for beautiful harmony 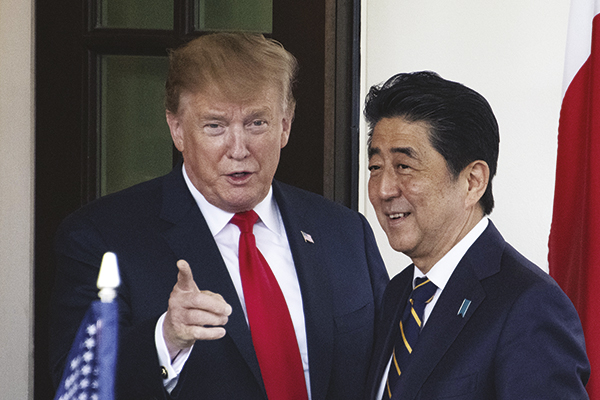 As a new emperor is enthroned, old ghosts are coming back to haunt Japan. Prime Minister Shinzo Abe is a nationalist who hopes to change the constitution, which could lead to Japan joining the nuclear powers. Is there anything the forthcoming visit of Pope Francis could do to stop him?

A bare-headed middle-aged man in black morning suit with tails and white tie offset with a gold chain and sashes and stars of four orders of chivalry walked into the room, followed by another middle-aged man and an elderly man in a wheelchair, both with sashes and stars. The lead man walked up three steps to a small platform covered in a white sheet and with a single chair with a gold chrysanthemum embossed on its back. The two other men flanked him but did not go to the platform.
Several men in black morning suits but without decorations followed, two carrying decoratively covered boxes like small coffins, plus others as attendants or guardians. The flunkies approached the platform and bowed 90 degrees, placed their boxes on small tables, stepped two paces backwards, bowed 90 degrees, acknowledged by a nod of the head by the lead man and a hint of a smile. They then took the boxes away again with more 90-degree bows.

Thus, Japan got a new emperor, Naruhito (inset). As a piece of theatre, it was sparsely minimalist, about two minutes from start to finish: no crown or crowning, no anointing, no holy water, no archbishops or priests in fancy dress, no women allowed to participate, no smells or bells, no fanfare or organ, no choir, no music of any kind, no talking, no sound except for the clacking of heels on the wooden floor.