PAST EVENT: The Tablet Spring Festival - all events online 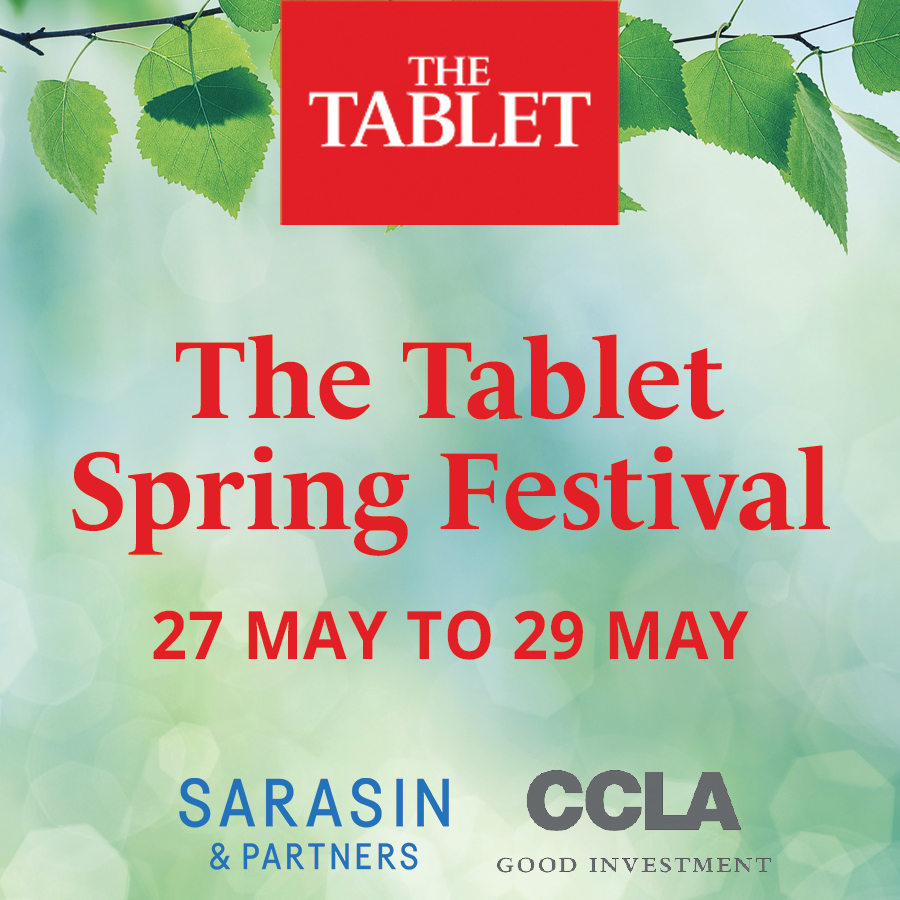 The Tablet is proud to launch its Spring Festival running for three days from
Thursday 27 May – Saturday 29 May.

This event is closed

Highlights of the Festival include:

11.00 am -12.00pm Official opening by the editor of the Tablet,  Brendan Walsh, and then a chance to meet some of the editorial team, to ask questions about their day-to-day work, and to contribute to a discussion of the magazine’s future.

2.00pm – 3.00pm Climate Change Masterclass with Sarasin & Partners. Richard Maitland and Alexander True will explain the key considerations when aligning your investment portfolio with your values focusing on the growing issue of climate change. They will also identify the important role that charities, as owners of capital, and asset managers play in helping to drive change and assist in the transition to ‘net zero’.

4.30 – 5.30pm Peter Stanford, author of Pilgrimage: Journeys of Meaning, and conservationist Mary Colwell, author of Beak, Tooth and Claw, and recently returned from walking the Camino in Spain, will discuss the growing interest in pilgrimage, and answer questions about their new books.

6.00 – 7.45pm Nick Hamer and Fr Erik Varden introduce a screening of Outside the City. Nick Hamer was given special access to the abbey of Mount St Bernard, the only community of Trappist monks in England, to make a film in which the monks reflect on spirituality, ageing and the end of life.

11.00am -12.00pm Dr Natalie K. Watson, Editor of inspire, the Tablet’s new international Catholic journal for young adults, and Sebastian Milbank, Newman intern at the Tablet and Assistant Editor of inspire, in conversation with neuroscientist Sofia Carozza; Dr Marie Daouda, a French-Moroccan journalist and a Stipendiary Lecturer in French at Oriel College, Oxford, and Dr Jacob Phillips, Director of Institute of Theology and Liberal Arts, St Mary's University, Twickenham, about inspire, faith, identity and the future of the Church.

1.00pm – 2.15pm Climate Active Strategy Film courtesy of Sarasin & Partners. The recording includes presentations from: - Cameron Hepburn (Professor of Environmental Economics and Director, Smith School, Oxford University) highlighting the policy response to climate change and reflecting on recent commitments - Natasha Landell-Mills (Head of Stewardship, Sarasin & Partners) explaining the anatomy of a successful engagement by an asset manager with a company in order to raise climate change up their agenda and achieve a ‘net-zero’ commitment  - Heidi Hellman (Head of Strategy at Centrica) explaining how businesses are responding to the increased levels of engagement from stakeholders on climate issues.  With additional commentary from Sarasin & Partners on the investment fund they launched three years ago which focusses on addressing climate change through actively engaging with companies.

4.30 – 5.30pm Chine McDonald (author of the just-released God Is Not A White Man), and US radio show host Gloria Purvis share some of the books and songs that became a source of liberation for them.

6.00 – 7.00pm Sarah Sands and Christopher Jamison OSB. As an editor of the BBC Radio 4 Today programme, Sarah Sands found herself researching monasticism as a means of combating stress. The Interior Silence, published in March, describes a quest that led her on pilgrimage to ten monasteries around the world. She and Christopher Jamison, Abbot President of the English Benedictine Congregation, discuss what monasticism has to offer to those living busy lives in the twenty-first century.

11.00 am -12.00pm Composer Sir James MacMillan, poet Michael Symmons Roberts and writer and publisher Paul Elie discuss how in a secular age people turn to the language of music to satisfy their longing for the transcendent.

2.00 – 3.00pm Francis Spufford - the prize-winning author of Golden Hill – will be interviewed by Peter Stanford about his life and faith and his most recent novel – Light Perpetual.

4.30 – 5.30pm Ruth Kelly was Secretary of State for Education and Skills and is now serving on the Vatican’s Council for the Economy, and Rowan Williams – who has engaged head-on with a number of political issues as Archbishop of Canterbury and then as chair of Christian Aid – in conversation with Paul Vallely about the role of faith in politics and public life.

6.00 – 7.00pm Marilynne Robinson in conversation with Fr Erik Varden, Cistercian monk and Bishop of Trondheim, about the religious themes in the Gilead series of novels. Marilynne Robinson, one of Barack Obama's favourite authors, is a Pulitzer Prize- and Orange Prize-winning novelist. Earlier this year, she published Jack, the fourth in her "Gilead" series, exploring deeply questions of faith and fate. Timothy Radcliffe calls this remarkable quartet of novels “this humane and spiritual exploration of human struggle”.

More events to be confirmed. All timings are shown in BST and panels are subject to change.