PAST EVENT Webinar: Thank you Lord 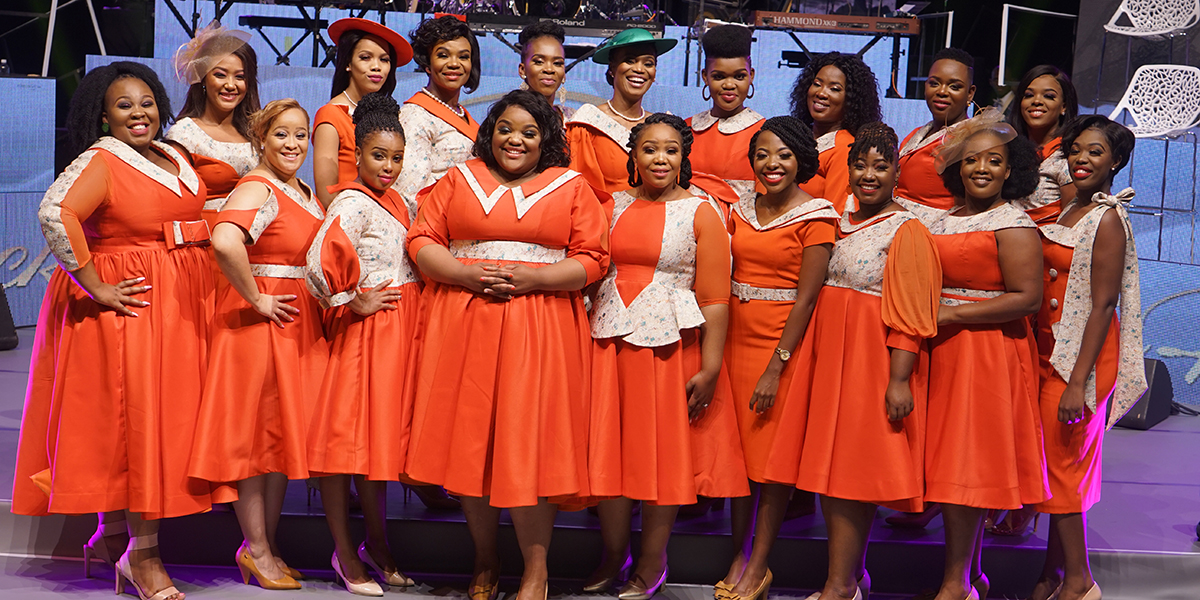 Members of the Gospel Choir, MTN Joyous Celebration will join Ruth Gledhill, The Tablet’s Online Editor, to talk about the landscape of South African gospel music and their long and illustrious journey which has made them into the gospel powerhouse that they are today.

The webinar will feature music from the group’s 25th-anniversary celebratory album, Joyous Celebration 25 - Still We Rise: Live At The Joburg Theatre.

Joyous Celebration is the brainchild of the industry's heavyweights - Lindelani Mkhize, Jabu Hlongwane and Mthunzi Namba. Since inception back in 1994, MTN Joyous Celebration has always been about the people - its aim was to create and establish a project that would uplift and heal the nation.

Not only was it a concept inspired by and born out of the peaceful transition in which the people of South Africa embraced their hard-won democracy, but it has also been about celebrating and showcasing our very own young talent.

Never did the founders imagine that twenty-one years later, the concept would be stronger, richer and very much alive - largely spurred on by the massive support for the brand across the globe. The name Joyous Celebration is a multi-award-winning gospel project that produces dynamic singers and musicians and their work has been felt all over the world. In addition, this household name has now become synonymous with Gospel music within South Africa and beyond.

2018 marks the 22nd Anniversary of the inspirational music extravaganza which has re-positioned contemporary gospel music in SA and has contributed to its recognition as one of the highest selling and most popular music genres in this country. The much-awaited MTN Joyous Celebration Tour 22 for 2018 kicked-off by the Live DVD Recording that took place on Saturday, 09 December 2017 at the Sandton Convention Centre.

The essence of the Joyous brand has always been about the people and the theme for 2018 is inspired by this. The duality of the Joyous 22 theme: "All for You", has the people at its core whilst recognising the One who created it all.

Jabu Hlongwane
As an acclaimed singer, songwriter and producer, Hlongwane has solidified his position as a pioneer of gospel music in South Africa and beyond. For his work, he was awarded the, “Best Contribution in Gospel” at the Africa Gospel Music, the South African Music Awards for best traditional Gospel Album.

Dr Sylvester Funani is a well-known and much respected South African Joyous Celebration lead vocalist. He started his music journey in 2005 when he auditioned for the illustrious gospel outfit, Joyous Celebration. He has been with the ensemble playing various roles from being a costume manager, merchandiser, artist manager and his ultimate break was in Joyous Celebration 14. His love and faithfulness toward the mission of Joyous Celebration is what has kept him with the group till to date

Sylvester Funani is foremost a Regional Manager for consumer banking in Nedbank, educator, and a household name in inspirational talks and bible expository teaching. Using a fine combination of humour, an incredible stage presence, and his personal life experiences, Sylvester has a unique ability to mesmerize any audience with his message of hope. Through his public appearances, Sylvester effectively motivates, inspires, and impacts thousands of people on the social network platforms, providing them with the confidence and tools to change their lives, as well as those of the people around them. He is also one of the most sought-after speakers in the Nelson Mandela Bay. He is also the founder and managing director of Sylvester Funani Enterprises where he focuses on CSI projects and assists schools and community projects. As a multi-faceted young professional, Sylvester Funani has learned to successfully balance work and family, by creating a strong support structure to ensure that his commitments to his clients is not compromised. A much-awarded industry professional, holds a national diploma in business management studies from the GIBS Business School. In addition to his achievements, Dr Sylvester holds a doctorate in Christian theology from International Miracle Institute (IMI), Pensacola, Florida, USA. In 2021 he completed his second qualification in Doctorate Of Ministry. When the pandemic started in March 2020, it ushered him into starting an online Instagram bible study master class which airs every Monday night for 3 hours.  His charismatic and flamboyant personality has endeared him to all those who have known him, and he continues to steal the hearts of those around him.

Born 18 February 1990 Bloemfontein but raised in East London. Her occasional appearances on popular gospel TV programs like Gospel Classics, It's Gospel Time and many others on One Gospel and other channels has made Lynnzay a household name. She has worked with a number of established South Africa artists, including international stars and served with the New Birth Baptist family under the Pastoral led of the late Bishop Eddie Long just to name a few. She was also nominated by the Crown Gospel Awards for her Afrikaans song in October 2015 Outside singing, Lynnzay does MCing for major events. She is also passionate about motivational speaking in schools and communities, praise and worship workshops as well as Sound word preaching.

Ruth Gledhill is an English journalist and is a former religion affairs correspondent for The Times,  a post she left in 2014.  Ruth was the last full-time newspaper journalist dedicated to religious affairs in the UK. She is currently online editor for The Tablet.