Human dignity is a global issue

Southern Europe this year faces a serious and growing refugee crisis, of that there is no doubt. No doubt, either, that this is the responsibility of the whole continent, not just Greece, Italy and Spain. For the principal ambition of the precarious boatloads of desperate people making for the northern shores of the Mediterranean is to travel across those countries to somewhere else – including, in many cases, to the United Kingdom.

As in Britain, virtually all European governments are under domestic pressure to restrict immigration. So the refugee issue sits in the politicians’ “too difficult” basket, in the vain hope it will go away.

In a statement condemning the EU’s inaction in the face of a growing humanitarian catastrophe, Amnesty International has stated: “With no safe and legal routes into Europe, people are increasingly pushed into the hands of smugglers and traffickers and are forced to risk their lives in unseaworthy vessels.” It is in this context that one must read Pope Francis’ call, in a letter to the International Labour Organization that was not as carefully phrased as it might have been, for a “concerted effort to encourage governments to facilitate the movement of migrants for the benefit of all, thus eliminating human trafficking and perilous travel conditions”.

For the fact is that many of those who risk everything to travel in an open boat to reach European territory would be legally entitled to asylum if there was any way they could stake their claim before departing. At sea they are regarded as illegal immigrants; once they arrive, they must legally be allowed to stay. The current surge in the flood of boat-people coincides with the civil war in Syria, and similar disturbances in North Africa have had a similar effect. In other words, they are not just fortune-seekers – though that certainly describes those who profit from them.

The numbers speak for themselves. Last year, according to the UN High Commissioner for Refugees, there had been 3,300 unauthorised arrivals in Italy by sea by the beginning of May. This year in an equivalent period there had been 25,000, a total which included those lost at sea and those rescued from it. Since the visit of Pope Francis to Lampedusa last summer, when he expressed his horror at the situation as it was then, it has become much worse. To a certain extent, the boat-people problem, including the increasing numbers who drown or starve to death on the way, is the product of bureaucracy – the insistence that applicants cannot be assessed until they reach European soil. But it is also caused by efforts to limit the flow by closing land borders.

By Pope Francis’ criteria of human dignity and the common good, the situation cannot be allowed to continue. Italy and Greece are right to insist it goes to the top of the EU’s policy agenda, for they cannot solve it on their own. But the common good here is not confined to countries with a southern coastline, nor even to the rest of Europe. It is an issue for the whole world. Solutions may start locally, but must end globally. Human dignity is universal too. 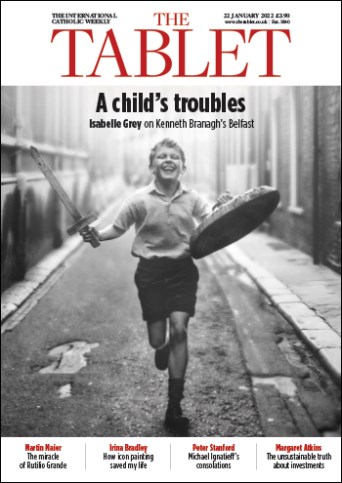