The Story of the Lost Child

Books of the year 2 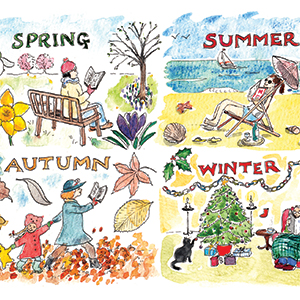 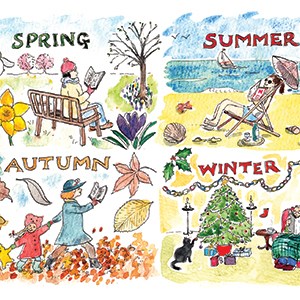 Our reviewers have found much to admire and enjoy amongst the books published in 2015.
Here is our second selection of their favourites from a year rich in reading pleasure, ranging from acclaimed new works by major writers to debut novels and overlooked gems

Christopher Howse
Family papers unseen for more than four centuries bring a new perspective to the Mediterranean world surrounding the great naval Battle of Lepanto of 1571 in Agents of Empire: knights, corsairs, Jesuits and spies in the sixteenth-century Mediterranean world (Allen Lane, £30; Tablet price £27). Noel Malcolm constructs a stupendous  mosaic of daily life and statecraft from the point of view of an Albanian family thrusting through the intrigues of Venice and Istanbul, Moldavia and Rome.

Teresa Morgan
The Silk Road: a new history by Valerie Hansen (Oxford University Press, £12.99; Tablet price £11.70) is vibrant social history that uses thousands of excavated documents, from tax registers to marriage contracts and private letters to pawn tickets, to introduce us to the people who lived along the Silk Road’s various routes and the traders who worked them. Death, politics and petrified dumplings,  religion and technology, paper and porcelain, camels, cosmetics and, of course, silk – this book has them all in a beautifully written ­historical cornucopia.

Hilmar Pabel
In Short Stories by Jesus: the enigmatic parables of a controversial rabbi (HarperOne, £11.99; Tablet price £10.80), Amy-Jill Levine does more than refute “the complacent anti-Judaism” lingering in the interpretation of Jesus’ parables. She deftly situates the parables in their historical and social contexts. Shunning platitudes, we should expect the parables to provoke in order to appreciate Jesus’ message. Levine writes with characteristic humour and accessible, compelling biblical scholarship

Melanie McDonagh
Michel Houellebecq’s Submis­sion (Heinemann, £18.99; Tablet price £17.10), about a France that capitulates to Islamic government, seemed prescient when it was published at the time of the Charlie Hebdo attacks; it feels even more grimly pertinent now. By way of antidote, The Spirits: a guide to modern cocktailing, by my colleague Richard Godwin (Square Peg, £16.99; Tablet price £15.30) is a pleasing account of the art of the cocktail. Life-enhancing. One of my favourite books ever has been republished this year: Noel Langley’s The Land of Green Ginger (Faber &?Faber, £6.99; Tablet price £6.30), about the son of Aladdin, his quest for a ­button-nosed tortoise, a land that floats and two bright green djinns. Fabulous. Brian Copenhaver’s Book of Magic (Penguin, £30; Tablet price £27) is a curiosity; a compendium of short, fluently translated texts from the Old Testament to Milton that touch on magic and alchemy. Up to the Enlightenment, the link between religion and magic was more potent than we might like to think.

Michael Walsh
The most subversive notion in Liberation ­The­ol­ogy ­is the conviction that we should look at the social and economic context in which doc­trines have been de­veloped. The Ransom of the Soul (Harvard University Press, £18.95; Tablet price £17.10) by the doyen of historians of early Christianity, Peter Brown, does exactly that about ­Christ­ian understanding(s) of the afterlife. Like all Brown’s writings, it is both scholarly and accessible – and this time, mercifully short.

Nick Spencer
Robert Tombs’ The English and their History (Penguin, £14.99; Tablet price £13.50) is the size and weight of a house brick which could be why the author ends by describing it as “a brick for our common house”. It is rather more interesting than a house brick, however. From Bede to Blair and beyond, its scope is vast, its judgements judicious, its prose ­engaging, it details surprising: a masterpiece of historical writing.

David Goodall
Anyone who remembers enjoying the “Narnia” stories or who was introduced to moral discourse by The Screwtape Letters will enjoy C.S. Lewis and his Circle, edited by Roger White, Judith Wolfe and Brendan Wolfe (Oxford University Press, £20; Tablet price £18), a selection of essays and talks about Lewis by more than 20 of his friends, admirers and critics, ranging from Elizabeth Anscombe to Rowan Williams and from John Wain to Alister McGrath. Between them they bring to life the thought and character of a philosopher, teacher, novelist and Christian theologian whose readability has put him in danger of being underrated as a thinker.

Jane O’Grady
In Action, Knowledge and Will (Oxford University Press, £35; Tablet price £31.50), John Hyman brilliantly tackles a problem that has rankled since Plato: what is involved when we voluntarily perform an action? “The will”, he argues, has been made too much of a catch-all of the various dimensions of human agency – physical, psychological, ethical and intellectual. Philosophy is all about fine distinctions. Here they are made acutely yet accessibly to give us a new picture of who we are.

Chris Nancollas
A chance encounter at a literary festival led to One Thousand Things Worth Knowing (Faber &?Faber, £14.99; Tablet price £13.50), the latest collection by
Paul Muldoon. The poems have his trademark wordplay, spiced with eclectic references, humour and whimsy. It contains at least one masterwork, “Cuthbert and the Otters”, a tribute to Seamus Heaney, staggering in its scope and complexity.

Nicholas King
The Contemplative Min­ister: learning to lead from the still centre by Ian Cowley (Bible Reading Fellowship, £8.99; Tablet price £8.10) is a book for our time, fit for reading over Christmas, before you head back into the maelstrom, to survive the pressures on your time. All of us are ministers; all of us need to be contemplatives. This book, by an evangelically-minded Anglican priest who has imbibed some of the riches of the Catholic ­tradition of spirituality, is for you.

Peter Stanford
Like many, I suspect, I am still hungry to know more about Pope Francis, and what has happened in all those decades in Argentina to make him the prophetic global leader he is.  So Jimmy Burns’ biography Francis: Pope of good promise (Constable, £25; Tablet price £22.50) is a must-read. Engaging, wide-ranging, thought-provoking and, above all, sure-footed in its handling of complicated events in Argentina, both political and ecclesiastical, it is authoritative and truly first rate. And making a welcome return is an updated and expanded paperback edition of Paul Vallely’s highly accomplished biography, Pope Francis: untying the knots – the struggle for the soul of Catholicism (Bloomsbury, £16.99; Tablet price £15.30).

Robert Carver
Mystic, poet, visionary, artist and great eccentric, William Blake remains a uniquely English enigma who still has the power to  move us deeply: surely no other culture or country could have produced such a strange blend of artisan and prophet. Eternity’s Sunrise: the imaginative world of William Blake by Leo Damrosch (Yale University Press, £18.99; Tablet price £17.10) leans heavily on the poetry, etchings and engravings, the works illustrating the man. Illustrated with 40 colour and 56 black and white illustrations, this attractive volume  would make a delightful present.

Mary Kenny
Tim Townsend’s Mission at Nuremberg: an Allied army chaplain at the trial of the Nazis (SPCK, £12.99; Tablet price £11.70), about the Lutheran pastor Henry Gerecke’s chaplaincy to the Nazi war criminals facing the gallows, is simple, sincere, detailed about Gerecke’s German-American background, and the dedicated way in which he approached his task (with Fr Sixtus O’Connor for the lesser number of Catholics). Fascinating to read the different responses of Keitel, Doenitz, Rosenberg, Sauckel, Ribben­trop et al. to their fate. History, biography and the challenges of faith are blended sensitively.

Brian Morton
Suffragette the movie was all nice cheekbones, sexily darted costumes and ­worthy, Streepian femin­ism, but it was a movie first and foremost, done as spectacle, and with a hollow heart. For a subtler and more inflected understanding of suffragism and its various emotional aftermaths, search out Ajay Close’s A Petrol Scented Spring (Sandstone, £8.99; Tablet price £8.10). A Scottish doctor administers forced feeding to a hunger striker who refuses to be caught up in the cat-and-mouse act trap, falls in love with her, but then ­marries her double and sound-alike, leaving a hollowness in his own heart that speaks to everything from sexual dread to fear of ­contagion to the gender origins of social authority. It’s a tough book from a hugely underrated writer who’s always been too bold to be popular but who nonetheless writes with an elegance that will sometimes make you laugh aloud from the sheer rightness of an image or line of dialogue.

Simon Scott Plummer
In Harry Mount’s Odyssey (Bloomsbury, £18.99; Tablet price £17.10), Mount has done for Ancient Greece what he did for the Latin world in Amo, Amas, Amat. He traces the decade-long wanderings of Odysseus between the fall of Troy and his reaching home in Ithaca. A scholarly, amusing, touchingly autobiographical travelogue which leads the reader back to Homer and the birth of  European literature.

Michael Glover
There is an extraordinary jauntiness of tone, a relishing and a celebration of life, in Chorale at the Crossing (Picador, £9.99; Tablet price £9), the last book of poems by Peter Porter, the great Australian poet who died in 2010. He puts on show the marvellous range of his technical gifts and his intellectual curiosity. Most touching of all, “Hermit Crab” describes his vulnerability at leaving a world so prized. He has no new shell to retreat to.

Theo Hobson
33 Artists in 3 Acts by Sarah Thornton (Granta, £20; Tablet price £18) begins with great verve: “Artists don’t just make art. They create and preserve myths that give their work clout.” Her interviews with artists pursue this thesis with tenacity, and in a tone carefully balanced between respect and scepticism. She plumbs the shallows of Jeff Koons with particular skill.

Lynn Roberts
Charlotte Gordon’s Romantic Outlaws (Hutchin­son, £25; Tablet price £22.50) is a double biography of two Marys, Wollstonecraft and Shelley, mother and daughter, told in alternative chapters which chime or contrast with each other in fascinating duet. The accumulated detail of places, characters and historical events gives these two lives a hallucinatory realism, from the streets of revolutionary France to the poetical coasts of Italy. Mary W. emerges as a heroic figure – her daughter’s the one you wouldn’t share a villa with.

Timothy Brittain-Catlin
Peter Cormack’s Arts & Crafts Stained Glass (Yale University Press, £50; Tablet price £45) is filled with countless beautiful photo­graphs and these, together with its erudite and accessible text, make this one of the most delightful books of the year, not to mention an excellent Christmas present. The lusciousness of the colours and the transformation of the stiff saints and dusty foliage of Victorian glass into passionate, almost living people surrounded by natural phenomena are unforgettable.