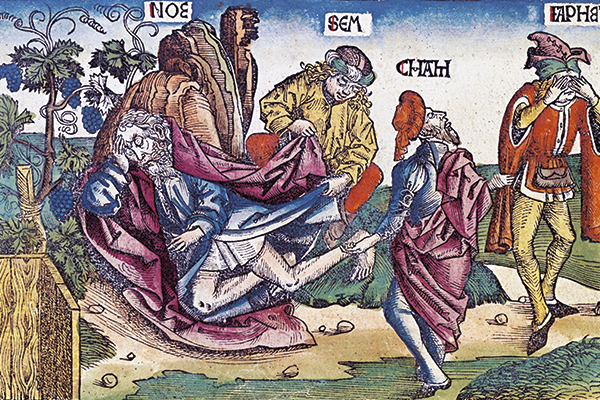 Metaphor can wound as well as enlighten. As followers of a religion grounded in the Jewish past, Christians were from the very beginning inclined not only to trace links between the Old and New Testaments but to interpret ­figures from Jewish history as proofs or prefigurations of Christian truth. Cain, the exiled fratricide, thus became a “figure” representing the Jews, exiled and condemned to perpetual servitude for their killing of Christ. Ham, the son of Noah, and his posterity, cursed as the “slave of slaves” for mocking Noah’s drunkenness, became “figures” for the Jews who had mocked Christ. By such means, Jews were collectively condemned as the inferiors of the Christians in whose lands they were obliged to dwell. In the eyes of theologians and canon lawyers, their role was to serve as object lessons in the consequences of deicide and disbelief. So far so deplorable. The ideas and stereotyping that M. Lindsay Kaplan traces here are widely acknowledged. The fact that they make for grim reading has not prevented their being repeatedly rehearsed. Norman Cohn, Ruth Mellinkoff, Sara Lipton and Irven Resnick, to name just a few of the many ­modern authorities, have explored both the intellectual and the visual means by which Jews were portrayed in the Middle Ages as dark-skinned, irrational, barely human, cursed to wander the earth as physiologically monstrous embodiments of the consequence of sin.