Progressives at synod manage expectations ahead of final document 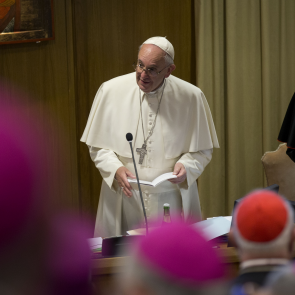 As expected, the final synod document does not say divorced and remarried Catholics can receive communion nor does it pronounce a change in approach to gays.

But given the hostility he faced from some of his own cardinals and fierce resistance from conservative lobbies Pope Francis will end the synod a happy man and with a document that has won approval from the worldwide episcopate.

From the start of proceedings it was clear that the Synod Fathers were divided on many of the contentious questions concerning Catholic teaching on marriage and family life.

Some believe that refusing communion to the divorced and remarried is a question of doctrine, others see it as a question of discipline and therefore open to development.

Bishops representing dioceses in the western world want to be able to develop a ministry of welcome to gay Catholics and would like a language that moves away from phrases such as “intrinsically disordered” and “tendency ordered toward an intrinsic moral evil.”

On the other hand, in many parts of Africa the Church is competing with the growth of Islam and evangelical communities and bishops feel the need to maintain their hard line on homosexuality.

In a gathering lasting just three weeks, and with Synod Fathers in disagreement on key issues, it was unrealistic to expect a document that provides dramatic new developments in areas that reform-minded Catholics feel strongly about. It is fair to say, however, that the final document moves the Church in a more open and pastorally sensitive direction.

The question that some believed had been closed during previous pontificates - such as giving remarried Catholics access to the sacraments - is still very much open to development.

This opening has been found not through the musings of a German theologian but via the teaching of Pope John Paul II in his apostolic exhortation, Familiaris Consortio in 1981, which followed another family synod.

The final synod document points to paragraph 84 of Familiaris Consortio which talks about assessing different situations that divorced and remarried couples find themselves in. There is, for instance, a difference between a spouse who was abandoned and one who decided to leave their husband or wife.

The synod document says that is the task of priests “to accompany interested persons on a path of discernment according to the guidance of the bishop.”

It then proposes a criteria for reflection by someone who is divorced and remarried including: behaviour towards their children when the marriage entered into crisis, attempts at reconciliation, the situation of the abandoned partner, the consequences of the new relationship on the family and the example to young people preparing for marriage.

ALL THE LATEST ON THE SYNOD DOCUMENT...

The document, which stresses that divorced and remarried Catholics must be integrated into  church communities, goes on to talk about the contribution of the “internal forum” about “which obstacle” prevents the “fuller participation in the life of the Church.”

It is significant that the local bishop is mentioned on this matter as some have suggested the Pope could, in the same way he reformed the annulment process, issue a motu proprio, a new law giving power to bishops to institute a process that could see divorced and remarried Catholics admitted to communion on a case-by-case basis.

As predicted, there is the development of a new language in regards to couples in relationships that fall short of the ideals of church teaching. Graduality, the notion that individuals are on a journey towards the fullness of truth, is very much present.

On cohabitation there is a recognition that couples live together before marriage due to financial reasons, this is the case in both the West (often due to the cost of housing) and in Africa (while a man pays off his wife’s dowry). Importantly it urges for such couples not to be condemned but to be helped in a journey towards “the fullness of matrimony.”

A similarly positive tone is present in the treatment of those in civil marriages. Such relationships, the document states, are generous and enduring and it is the Church’s task to encourage couples towards a sacramental marriage.

Most disappointing for progressives, however, will be the passage on gay Catholics. While it is against any unjust discrimination it talks of people with “homosexual tendencies” and there is nothing on the recognition of same-sex partnerships.

This synod has, of course, not just been about marriage and family but about a renewed synod. Pope Francis wants a synodal, listening Church not just synod meetings.

The final document may not give definitive answers to burning questions but it gives Francis some room for manoeuvre during the Jubilee Year of Mercy when churches across the world are being encouraged to fling open their doors.

The Synod was truly about 'bearing witness to everyone that the Gospel continues to be a vital source of eternal newness, against all those who would “indoctrinate” it in dead stones to be hurled at others.

It was also about laying closed hearts, which bare the closed hearts which frequently hide even behind the Church’s teachings or good intentions...sometimes with superiority and superficiality, difficult cases and wounded families.

It was about making clear that the Church is .....of sinners seeking forgiveness, not simply of the righteous and the holy.

It was about trying to open up broader horizons, rising above .... blinkered viewpoints, so as to defend and spread the freedom of the children of God, and to transmit the beauty of Christian Newness, at times encrusted in a language which is archaic or simply incomprehensible.'

Can't say more than that really.

Of course there is always room for the Pope to manoeuvre.
God the Father created man and woman, with the intention that they procreate through marriage.
God the Son founded the Church, gave it a set of rules and appointed Peter as its first leader.
Thus marriage and the universal Church, of which Jesus is head, are so intertwined as to be inseparable within the whole redemptive process.
As most loving parents and grandparents know, some family members do not live up to expectations. But no matter what they do, or don't do, the family door is always left open, and welcome mats put out for prodigal sons
As Jesus asked: 'what father would give his son a scorpion if he asked for an egg?'

It is one thing to have a conservative view about the immorality of homosexual acts.

It is quite another to endorse legislation that criminalises consensual homosexual acts.

Remaining silent, or even worse, supporting such discriminatory legislation is not much different from endorsing apartheid legislation.

Russia and some African countries excuse their repressive homophobic legislation by arguing that homosexuality will spread if not checked by laws.

All the scientific evidence and personal testimony before us indicates the contrary: that homosexuality is not a choice. To ignore this is as willful, ignorant and anti-scientific as those who deny the evidence for human-induced climate change.

The societal, evangelical and Islamic views notwithstanding, African bishops who do not oppose the repressive homophobic legislation of their governments betray their Christian obligation to side with the oppressed and marginalised.

This article reads as a rather desperate exercise in wishful thinking.

What is clear is that the only growing, vibrant part of the Church and the one from which the next Pope will come has made clear that they will not countenance a moral free for all.

Perhaps we should all accept that and move on.

As for synods, that divisive and destructive thing, look what they have done to the Church of England before wishing any more on Catholicism.

The persistent myth in this report is that the Pope had either the will and the power to accommodate Catholic faith and morals to postmodern understandings. He has neither.

You seem to have a problem with these real boundaries. I certainly do not.