Should the Church come between Christ and his flock?

This week the Vatican published its working document for the Synod on the Family. A lay Catholic examines the theology behind the ban on civilly remarried Catholics receiving the sacraments

Those who have advocated a “penitential pathway” for divorced and remarried couples to travel on if they want to receive Communion – including the unnamed advocates in the just-released working document – or Instrumentum Laboris – for October’s Synod on the Family – rarely develop the proposal. There have been few suggestions describing how couples would walk this pathway, and precious little theological analysis that might justify it. So it is left to the layperson to try to work out why the idea makes one’s blood run cold.

We are all sinners, repeat offenders, so the route we take on our life’s journey should be signed the whole way by Confession and penitence. When we receive the real body and real blood of Jesus Christ we should be prepared for the most profound encounter with the holy that is available to us this side of eternity. Confession paves the way for Christ to heal us in the Eucharist. 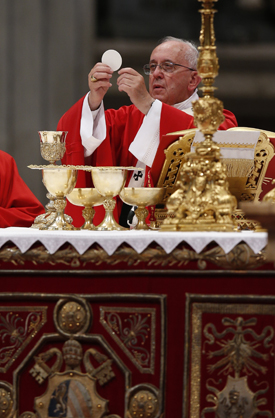 The Church ignores the fact that, in the West, most people who receive Christ in this way have not been to Confession that week or month. It ignores the fact that a very large number are habitually engaged in some form or other of irregular sexual behaviour, and would rather just not talk about it. But it does note and argue that if someone who has previously promised himself or herself to another for life in marriage, and found it impossible to keep that promise, then goes on to make that promise to another person, and formalises it in marriage, then that person has formalised a life of sin. On that basis that person is denied the freely given, life-sustaining, salvific reality of Jesus Christ himself.

This is catastrophic for the person and the Church. If someone is desperate to receive Him, it is more or less a certainty that Christ himself has invited him or her. More than this: Christ in all his humility has knocked and asked if he can enter the life of that man or woman. The person longs to say yes, to embrace and be embraced; to serve, and to be fed by Christ himself so that this service might be total and effective.

The Church perceives a conundrum here, and tries to solve it by saying that the affected Catholics need “pastoral care” and by being present during Mass they receive “spiritual communion”. To which any true believer might respond: “Your ‘spiritual communion’ is at best a cop-out and at worst a lie; and your pastoral care is not only a cop-out but a poor substitute for Christ, who my body and soul cry out for and Who is crying out for me. Who are you to deny us this?”

I suggest that those who have been through a divorce already know more about penitential pathways than many people who have not. Some divorcees may have behaved badly, and if they are desperate to receive Christ, that suggests they have become aware of that fact. Others may be victims of another’s selfishness. Never mind: all are denied Jesus.

Even the plea for mercy – a constant in this debate – that will enter the discussions at the Vatican’s Synod on the Family in October, is hardly appropriate here. Everyone who has come to Mass is in need of the mercy of the Lord. Every priest acknowledges this and includes himself with all the rest of us. To single out one particular category as being in special need is neither pastoral nor merciful. It was Cardinal Walter Kasper who spoke of the Church washing its hands of this problem and behaving like Pontius Pilate. I would go further: in continuing to stand between Jesus and his guest the Church is behaving as if it doesn’t believe in the Real Presence of Christ in the Eucharist at all.

The writer is a lay Catholic in the diocese of Westminster

Wow- judging from the above comments, British "Catholics" are nothing short of pagans.

I second Karen's comments! Jesus was not sent to or for the "perfect" who want to exclude the rest of us.

these rules are man-made (i stress the 'male' issue) for the purpose of control and conformity. i encourage anyone and everyone to receive Communion- whether it is in a catholic 0r 'other ' service. in a non-starvation environment, the primary purpose of 'food and presence' is community…community….community. go ahead! ask Jesus. he'll tell you.!!!!!

An excellent analysis of the difficult position that the hierarchical Church has placed itself in by being the arbiter of who is worthy to receive Communion. Christ identified constantly with the marginalised and we might do well to remember that divorcees are more welcome in the Kingdom of God than the rest of us

The Church's requirement of being "free of sin" before Communion is a Church regulation to impress on us the sacredness of Communion and to recieve with reverence.

The text often cited is 1 Corinthians 11:28. But in that context Paul is talking about discerning the body of the Community and sharing with each other.

In Communion, the Church hold that the presence of Jesus, under any portion of the bread, or any part of the wine, is the presence of the whole Jesus, body and blood, soul and divinity.

The presence that fits that best for me is that it is the presence of the risen and transfigured, and ascended Jeus a He is now in Heaven. The sacrificed "Lamb of God" that St. John sees in the vision of the Apocalypse.

I think people's imagination is sometimes led astray by those stories of "eucharistic miracles" where the host is supposed to have been changed into some bodily organ or hunk of meat; and the wine is supposed to be human blood without any "body" part.

That is not exactly "the presence of Jesus whole and entire, body and blood, soul and divinity" under the appearance of any part of either species.

St. Paul tells us that bodies in heaven are "spiritual" bodies. Even the body of Jesus. Resurrected and Heavenly bodies don't "bleed".

The REAL "real presence" should not get colored and mislead by those old "eucharistic miracle" stories.