Heythrop’s closure could have been avoided

As The Tablet reports this week, a German bishop has called for Pope Benedict XVI’s revision of the Good Friday prayer for the Jews to be revoked. A nun dedicated to furthering Catholic-Jewish relations says she couldn’t agree more with Heinrich Mussinghoff, the Bishop of Aachen

Bishop Mussinghoff’s request that Pope Francis revoke the Good Friday prayer for the Jewish people according to the Tridentine Rite has come at a fitting moment in this year of the fiftieth anniversary of Nostra Aetate, the groundbreaking Second Vatican Council declaration that set the Church on a new path of dialogue with the Jewish people. Over the past 50 years the Church has been developing a positive attitude towards Judaism after 2,000 years of very painful, almost totally negative history.

Before the Council, the Good Friday prayer referred to the Jewish people as “faithless” and “blind” and called for them to “acknowledge Jesus Christ”. Minor corrections had been made until we received the final revision of the prayer in 1970 which read: “Let us pray for the Jewish people, the first to hear the Word of God, that they may continue to grow in the love of his name and in faithfulness to his covenant. Almighty and eternal God, long ago you gave your promise to Abraham and his posterity. Listen to your Church as we pray that the people you first made your own may arrive at the fullness of redemption. We ask this through Jesus Christ our Lord. Amen.” 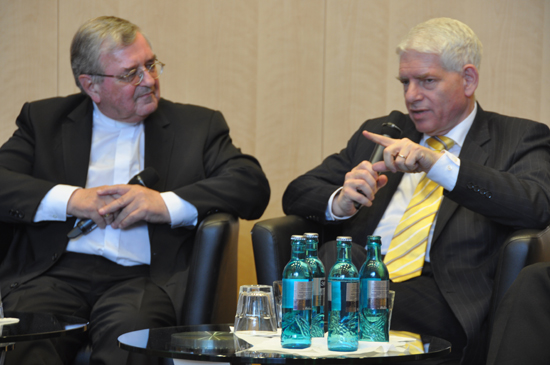 This wholly positive prayer echoes the words of St Paul in Romans 11, where he speaks of the mystery of God’s mercy when dealing with his own people. In his address to the Jewish community in Mainz in 1980, St John Paul II said that this covenant had “never been revoked” by God. The Jewish people have remained in a covenantal relationship with God through which they access salvation. In the explanatory preface to the printed version of the 1985 Vatican document, Notes on the Correct Way to Present Jews and Judaism in Teaching and Preaching, the then-Mgr (later Cardinal) Jorge Mejia, Secretary of the Vatican Commission for Religious Relations with the Jews, said that “the Jews have their own way to God and they must follow it.”

As Bishop Mussinghoff says, it is a matter of deep regret that after Pope Benedict XVI issued his motu proprio liberalising access to the Tridentine Rite, he revised the Good Friday prayer but it still prayed for the conversion of the Jews – “that our God and Lord may illuminate their hearts, that they acknowledge Jesus Christ is the saviour of all men”. This caused grave offence to the Jewish community and alarm to those Catholics involved in the Jewish-Christian dialogue after all the good work done to rebuild relations. For Jews, this brings back memories of centuries of pain when Good Friday was a time of fear for them because of the ancient charge of deicide, a charge that was definitively revoked in Nostra Aetate. 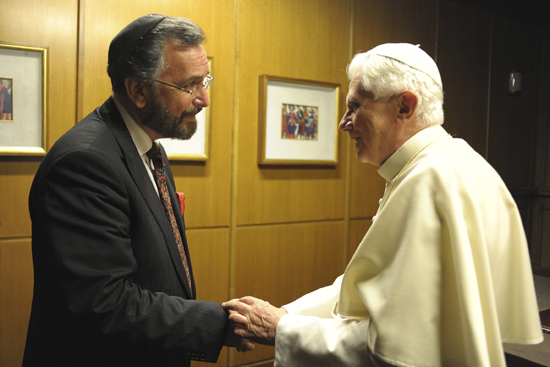 If the call by Bishop Mussinghoff to replace the Pope Benedict’s version of the Good Friday prayer with the 1970 Ordinary Rite version, was heeded, it would be a significant gesture, affirming the great progress made by the Catholic Church in her relations with the Jewish people since Nostra Aetate.

Top: Bishop Mussinghoff supported the plea by Dr Josef Schuster, head of the Central Council of Jews in Germany at an event to mark the fiftieth anniversary of Nostra Aetate. Above: Pope Benedict with British-born Rabbi David Rosen in 2010. Rabbi Rosen expressed concern that the revised prayer marked a backwards step in Catholic-Jewish relations. Photos: Kath. Stadtkirche Frankfurt/Doris Wiese-Gutheil, CNS/L'Osservatore Romano via Reuters

I had realised it wasn't you, Jim, and am hoping it's not a bit of skulduggery on the part of those who seek to muddy the waters.

John14:6 causes me problems in that, while I believe Christ is the fullness of revelation, I cannot believe that union with God is exclusive to the Christian way, truth and life.

I'm certainly not going to pray for the conversion of anyone who acts justly, loves mercy and walks humbly with their God(s). I pray for all people of faith to be faithful, and for those who have no explicit faith to be open to the power of God's pervasive and indefatigable Spirit.

I don't know who posted this, but it was not I.

Jesus is the only saviour. There is no other way to heaven than Him."

"These are very ancient prayers, going back to the days of the early Fathers. They should be left well alone."

There were many "ancient" things about Jews that this church has changed, not the least of which because of embarrassment but, better so, conversion of heart.

Some traditions are best long gone.

A Jewish convert to Catholicism Mr. Roy H. Schoeman, author of the book Salvation is from The Jews [runs a website with the same name too], says the enemy knows that if Jews convert [and they convert before the end of the world], his game is up [so why not delay his inevitable end]. I am thinking this opposition to the Church's prayer for the Jews is inspired by this enemy [Satan].

The prayer that refers to "the perfidious Jews" was part of the Tridentine Rite prayer. After Benedict XVI permitted use of the old rite again in 2007, in 2008 he issued a revised version of the Good Friday prayer which no longer used the phrase but still prays for the conversion of the Jews. It is this prayer the bishop and the nun want revoked. The 1970 prayer is part of the new rite, whether in the vernacular or Latin.
Abigail, Online Editor

Actually as Patrick says we do pray for all non Christians, just sequentially. The prayers are fine as they stand and the bit about "perfidious Jews" has long been removed. It need not be sanitised any further.

We are NOT talking about the new rite. Whatever is in the 1970 missal is wholly irrelevant to this discussion.

I wish people who know nothing about the old rite would leave those of us who wish to use it well alone. As those who use it know it is practically forbidden during the Triduum anyway, under the terms of Summorum Pontificum (by which I mean that the general permission extended by this motu proprio to priests to celebrate it at will does not apply to this period), so in practice it is only communities which use the old rite alone such as the ICKSP or the FSSP which actually use it for the Triduum.

As to Martin - nothing wrong with praying for the conversion of the Jews - the problem is precisely that it specifies the Jews, which may have been fine when they were the only non-Christians, but we all know where eventually that led...

In response to Patrick and Denis, nothing should be excised from our history, it is what it is. But neither should we continue with prayers that give offence, based on our 2000 years of human history that saw persecution of the Jews as one warped result from such prayers.

And to Jim I say, yes no one goes to the Father except through Jesus .... but we don't have to beat non-Christians over the head with that particular aspect of our faith. There are other aspects that will better resonate with and capture the interest and hearts of non-Christians. I'm quite confident that our loving, infinite God will find a way to bring all people to salvation .... in spite of the man made stumbling blocks the Church puts in the path of Christians and non-Christians alike.

i could not agree more!!! with all of his intelligence and learning, he apparently forgot that jesus and his founding followers were all jews!!!!! they were born…lived …worshiped….and died as jews. … this includes Paul- who is known as the primary champion of 'christianity.' if he is, he did it as a Jew.

Jesus is the only saviour. There is no other way to heaven than Him.

This call to return to the 1970 version prayer of Good Friday makes sense. We don't have to place agenda for God nor our bias towards peoples in our prayer. We simply pray with infinite compassion and gratitude for all, Jews included in a special way for our common heritage

Sister Shepherd is embarking on a slippery slope. There are a number of rather embarrassing excerpts from the New Testament that might need to be excised:
John 20:19 and Acts 12:11 come to mind.

In response to Xavier Grangge, in the old rite as in the modern rite, we do pray for all: we do so sequentially. First for the needs of the faithful, then for Christians outside the Catholic fold, then for the Jews, and finally for unbelievers.

These are very ancient prayers, going back to the days of the early Fathers. They should be left well alone.

Because, Martin, if that is the case the prayer should be 'For All', not just the Jews. Why are these singled out for special mention, especially in view of the Catholic Church's persecution of Jews in the past. Insensitive seems hardly adequate to describe it.