It's not easy being turbulent priests

The Catholic Church’s crisp four-page letter to voters ahead of May’s general election has been welcomed in the secular right-wing media as passionately as the Church of England’s own, 52-page guide was condemned.

The Daily Mail in a leader claimed the contrast could hardly be more stark between a CofE document that “could have been dictated by Labour HQ” and a Catholic one which “focuses firmly on the great moral questions of our time”. 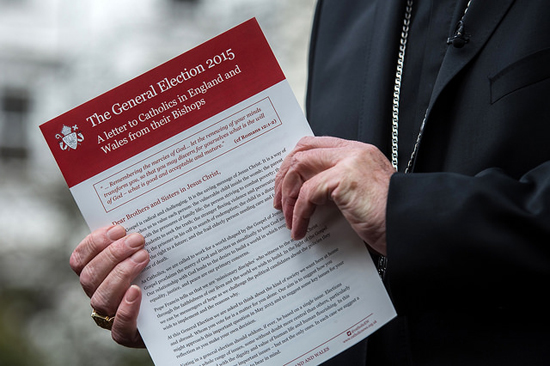 As with past such guidance (the CofE document, unlike the Catholic bishops’, is unprecedented), the Catholic letter emphasises what it calls life issues, prominently asking: “Where do the candidates … stand on assisted suicides, euthanasia [and] abortion…?” This is hardly surprising. For the Church, these issues are not open to negotiation.

But they are issues – along with “family values” – on which no political party can claim a monopoly, certainly not a Conservative party led by David Cameron, whose one antagonism against his own side after ten years as Tory leader has been to introduce same-sex marriage.

Which brings us to the difficulty of pigeon-holing either Church – and indeed Christianity – as “right-wing” or “left-wing”.

The Catholic Church has – rightly – had as turbulent a relationship with the current Tory-led Government as it did when Labour was in power, as shown by the controversy last year over Vincent Nichols’ comments on the “disgrace” of welfare cuts.

Look closer at the Catholic document, and it shows just as much concern as the CofE document over poverty and the living wage, inequality and food banks.

The second paragraph goes to the heart of the Gospel and Christ’s commandment to love God and neighbour, stating: “Our relationship with God leads to the desire to build a world in which respect, dignity, equality, justice, and peace are our primary concerns.”

It later continues: “Government policies should be assessed on the ways in which they impact those most in need, including those who are homeless or hungry,” laments “job insecurity and overstretched community services” and even makes a tilt towards pro-Europeanism.

At first sight, free-marketeers might welcome the statement that, “The private sector has a vital role.” And in its report, the Mail favourably contrasts the Catholic message against that of the CofE which, it reports, “was widely criticised for its focus on inequality and the alleged evils of the market economy, consumerism and the legacy of Margaret Thatcher.”

Yet the Catholic bishops’ letter goes on to say: “Business should see itself at the service of society … People are not merely economic units to be exploited.”

Trying to label in partisan terms such a characteristically nuanced mix of social conservatism and economic interventionism is like trying to pick up mercury with a fork.

The right, and certainly the Tories, would be wrong to breathe a sigh of relief at the publication of the latter church document.

But nor should Labour be complacent. As Mike Craven argued in The Tablet on 14 February, it risks alienating its traditional Catholic vote.

And while the Church of England is no longer the Tory party at prayer, it is hardly a wing of the Labour movement either.

Rowan Williams once described himself as a "hairy lefty", and his very different successor as Archbishop of Canterbury, Justin Welby, had at least one unreported private meeting with Ed Miliband during the this parliamentary term.

However, conventional wisdom that the former oil industry executive is a secret Labour supporter is misguided, according to well placed sources.

Certainly, the centre of gravity in the wealthy, largely white masses of the Holy Trinity Brompton Evangelical movement, which remains his base, is very far from the political left.

Neither Church had a particular political movement in mind when drafting statements that at times verge on the bland, inevitably, given the inherent incompatibility between the religious sphere and the (increasingly) secular political one in Westminster.

Christians must take both their religious consciences and political consciences into the ballot box, and the two are not always easy to square.

James Macintyre is a reporter at The Tablet

Why do Catholics need advice from the bishops, especially bearing in mind the covering-up of child abuse in the past? The bishops lost their moral authority as a result and, I suspect, few thinking, intelligent Catholics would pay much attention to the latest document. Is this just another example of Catholics being infantalised and in need of someone to guide them in their choices at the next general election?

James, this is one of those rare occasions when the Bishops have got their advice just about perfectly correct, basing their views on Gospel values.
There are Catholics who will not be happy unless they can read into such a document that our bishops are condemning the Conservatives and praising Labour. Happily this publication does neither.