Arguing about social mobility limits the scope of education

So topless models are okay but breast-feeding in public isn't?

In Braga, the holiest city in Portugal, stands the church of Nossa Senhora do Leite, which translates as Our Lady of the Milk. The niche over the main door features a sixteenth-century statue of the Holy Virgin breastfeeding the infant Jesus, a tender smile on her face. It is a simple, unadorned statue portraying a simple, necessary act.

Five centuries later, we seem to have gone backwards in how we treat breastfeeding mothers and infants. Last week saw a media storm after a nursing mother was told by a staff member at Claridge’s Hotel in London to cover herself with a cloth. Many people have weighed in on the issue; most offensively Nigel Farage, who suggested on LBC Radio that if an establishment has rules about breast-feeding they might ask women to sit in a corner.

This shows his ignorance of the law, since the 2010 Equality Act makes it an offence to discriminate against a breastfeeding woman. When I had my son, I was ready to cite this law if necessary. Fortunately for me, I never encountered such prejudice, and was able to breastfeed him in peace whenever and wherever he was hungry. 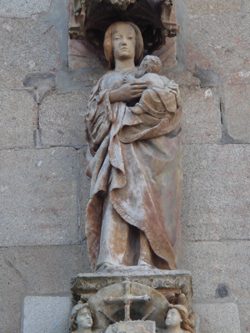 It should come down to the needs of the child. If a tiny baby is hungry, he or she must be fed. A newborn’s stomach is the size of a grape: clearly it will need frequent topping-up. A nursing mother will also need to eat and drink whilst feeding, or her health will suffer. These aren’t opinions, but physical facts. Another fact, borne out by my own experience, is that most people don’t notice breastfeeding. The word “discreet” has been much bandied around, as if there is a good or a bad way to breastfeed. The only good way to breastfeed is if the child gets fed. It is impossible to be anything other than discreet, since the baby’s mouth covers the nipple and their head obscures the breast. Someone would really have to stare to see more, and why would they do that?

Such is the hypocrisy which surrounds breasts and women’s bodies. Any lingerie advert will show far more breast than a breastfeeding mother does, and breasts are still used to sell a wide variety of unrelated products. We have to question a society where it’s acceptable to use women’s bodies as a cheap marketing ploy, yet unacceptable for breasts to be seen in daily life performing their natural function. If you search for images of Our Lady of the Milk, you will find hundreds of beautiful pieces of artwork celebrating Mary breastfeeding Jesus. Jesus became human in order to understand our experience, which includes breastfeeding. Mary’s role was to carry him, give birth to him, feed and raise him to adulthood: the sacred task of any mother. If this reality of motherhood can be accepted and celebrated by the Church over centuries, and indeed enshrined in twenty-first century law, then why can’t society as a whole also acknowledge and support its mothers?

Suzanna Fitzpatrick is an Anglican writer and the mother of a toddler, and has written a sequence of poems on aspects of motherhood, including breastfeeding

This female equates herself using a topless type. Therefore whether it be, so long as the girl will not whine as soon as someone wants to gawk at the woman's, esp. guys.

I can't understand why women find it difficult to be discreet and cover that side of their body with a shawl when breastfeeding. This lady equates herself with a topless model. So be it, as long as she doesn't complain when somebody wants to gawk at her, esp. men.

Beware those near occasions of sin!

There you have it fellas - beware of breast feeding mothers.