What the Pope really meant in Strasbourg

Pope Francis’ speech to the EU Parliament in Strasbourg came at a time when significant minorities in many EU countries are losing hope in the European institutions. Martin Schulz, the president of the European Parliament, no doubt wanted the endorsement of those institutions. That was what he got, but possibility not in the form he would have expected.

The Pope spoke to the political realities of Europe. It is a speech designed to further Vatican-EU relations, certainly prepared by many hands and not just by Francis himself. 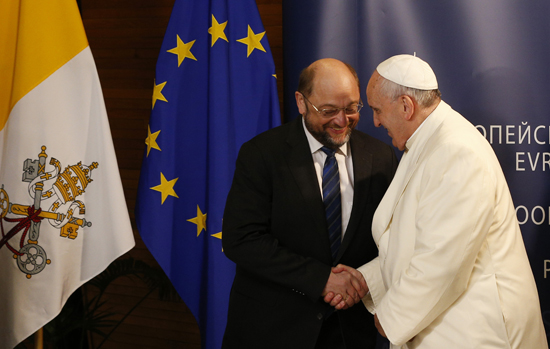 Martin Schulz began by listing many of the problems of the EU (and for that matter of the rest of Europe) and it was familiarly depressing. The Pope then used the same questions to give a very hopeful, if strong message. He is a pope of symbols and this is his first visit to anywhere in the EU beyond Italian territory. He has chosen to visit two of the largest democratic institutions in Europe. He promised the cooperation of the Church, not least of Comece (the Conference of Bishops’ Conferences of the Member-states), with these and the other institutions of Europe.

He identified what he considered the real problem areas of present day Europe: the loneliness typical of those who have no connection with others; the marginalisation of elderly; the young who lack clear points of reference and opportunities for the future; and the treatment of the poor and immigrants.

He called for a return of Europe to its core values of peace, subsidiarity, solidarity and the dignity of the human person. His solution to the problem areas he identified was to give Europe hope by restoring a sense of transcendence and the centrality of the human person; to nurture the gifts of each man and woman. This should be done through an education, he said, not least in the family, which assists the human person to grow in his or her totality. He said that these gifts would flourish in work, harking back to John Paul II’s 1981 encyclical on work, Laborem Exercens. Francis called for a new immigration policy which would not turn the Mediterranean into a cemetery.

In the last 24 hours some commentators have seen in Pope Francis’ speech an endorsement of the negative views of Europe. He is indeed critical of many of the present policies but he wants greater engagement, not disengagement, he is encouraging other countries to join (the Balkans) not countries to leave. He is looking for a rediscovery of European identity centred not on the economy but on the sacredness of the human person. His conclusion is a trumpet-call to action and to hope: “The time has come for us to abandon the idea of a Europe which is fearful and self-absorbed, in order to revive and encourage a Europe of leadership, a repository or science, art, music, human values and faith as well. A Europe which contemplates the heavens and pursues lofty ideals. A Europe which cares for, defends and protests man, every man and woman. A Europe which bestrides the earth surely and securely, a precious point of reference for all humanity!”

If in fact Pope Francis means to be as liberal in his stenematt as some here interpret, then he has just succeeded in landing a huge insult on his still-living predecessor on his birthday, at a Mass in his honor.I would hope that Pope Francis is not so utterly classless.I would also hope that the Pope is not so obtuse as to think that desiring to turn back the clock and to domesticate the Holy Spirit is a traditionalist and only a traditionalist phenomenon.While some might, most traditionalists don't want to turn back the clock but instead, want to take the best of what we have and combine it with what we have gained in the meantime. This is particularly true in the liturgical sphere, where those who remember the brief, mumbled, and otherwise poorly-celebrated Masses of the pre-Conciliar era would not trade them for the carefully and beautifully celebrated EF Masses of the present. Many of us who consider ourselves traditionalists believe the fruits of the liberated EF and the RotR (and the associated growth in Catholic identity and vocations) as a work of the Holy Spirit.Indeed, some of the biggest proponents of turning back the clock that I hear are self-styled progressivists it's just that they want to turn back to circa 1970 (and not 1950 or some other perceived golden era' as they tend to project onto traditionalists en masse) and confuse every idea that comes to their minds as being inspired by the Holy Spirit . Yet they lack the discernment to determine whether or not it is the Holy Spirit, and the docility to bend when the Church, under the guidance of the Holy Spirit, offers a corrective.We all want progress, but if you're on the wrong road, progress means doing an about-turn and walking back to the right road; in that case, the man who turns back soonest is the most progressive.- C.S. LewisMay Pope Francis be the best and truest progressive in the sense Lewis suggests.

On a broader note why is it that every time the Pope speaks various individuals are putting themselves forward to tell us what he means.
I think on this occasion the Pope's comments were entirely unambiguous. Bishop Kenney's interpretation adds nothing, but rather risks causing confusion where none existed.