Traditionalists and progressivists: the two prodigal sons of the Synod

At the time of his sentencing, the trial judge recommended he serve a minimum 30-year tariff and suggested Roberts might never be freed. Understandably his release has been condemned by police representatives.

In a strange coincidence, on the day Roberts left prison, Pope Francis addressed representatives of the International Association of Penal Law where he said life imprisonment was “a hidden death penalty” and said capital punishment should be abolished.

"All Christians and people of good will are thus called today to struggle not only for abolition of the death penalty, whether it be legal or illegal and in all its forms, but also to improve prison conditions, out of respect for the human dignity of persons deprived of their liberty,” the Pope said. “And this, I connect with life imprisonment," he said. 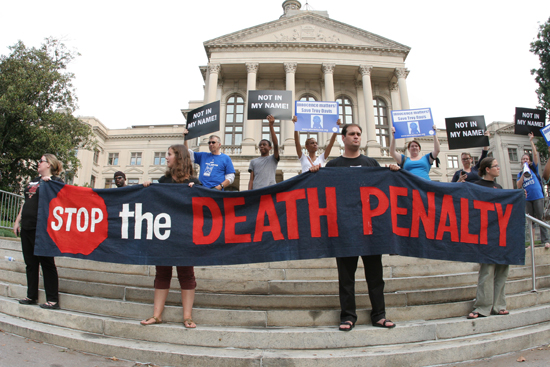 The Church’s catechism, as the Pope pointed out, does not exclude the use of the death penalty as long as it is the only way of “effectively defending human lives against the unjust aggressor”.

But Francis explained that such circumstances are “rare, if not practically non-existent” given the advances in contemporary societies in protecting people from dangerous criminals.

He went on to criticise the tendency in some societies to overuse punishment, offering up "sacrificial victims, accused of the disgraces that strike the community”.

On this point the Pope appears to be echoing the ideas of René Girard, the French anthropologist, who argues that sacrificial scapegoating is an integral part of human societies. Girard stresses, however, that the gospels seek to overturn this process, as Christ was the ultimate, innocent scapegoat.

Pope Francis’ condemnation of the death penalty is not really new (St John Paul II frequently called for an end to capital punishment.)

Yet he appears to be subtly developing the catechism in this area, placing himself alongside those who work on the “peripheries” opposing the death penalty. Sr Helen Prejean, whose work on death row in Louisiana in the United States was turned into a film Dead Man Walking, springs to mind.

There will be others, particularly in the US, who may feel uncomfortable about the Pope’s remarks. They will argue that it is up to legislators and not the Bishop of Rome to work out how best to protect citizens and tailor punishments.

Roberts’ release will also be viewed with suspicion, and many people are asking whether he is truly contrite for his crimes. How can we forgive an individual who has not repented?

On the other hand, Pope Francis is asking for an examination of conscience over how modern societies treat prisoners. The desire to punish and condemn comes easily, but with prisons overcrowded to breaking point, is this working?

The Christian approach, as the Pope is showing, is a counter-cultural one. It is perhaps best summed up by the late Lord Longford, the prison reformer and Tablet trustee, who when asked about his work with convicted criminals said: “Hate the sin, love the sinner.”

Above: Protestors on the steps of the Georgia Capitol in Atlanta before the execution of death-row inmate Troy Davis in 2011. Photo: CNS/Georgia Bulletin

Francis' speech is plainly the moralising of a fantasist. In every country there is a small, but significant number of people who represent a long term danger to the general population. I can think of obvious examples such as terrorists, serial murderers, large scale organised crime lords, war criminals and predatory paedophiles. If capital punishment is abandoned, as it has been in England since the 1960s, the only practical alternative is permanent detention, or conceivably some form of continuous observation so restrictive that it is akin to permanent imprisonment.
Broadmoor Hospital is about twenty miles from my home. Just about every inmate is there because of truly heinous crimes. Our long term and high security prisons contain a considerable number of "sane" criminals whom you would not want to meet in a dark alley, or anywhere else for that matter. Are these seriously going to be released regardless of the threat to public safety? It speaks volumes about the warped morality of Francis that he says almost nothing about the safety of children or other innocent members of the community, or about those who have been murdered by released murderers.
The Church has too much of a vested interest here. Obviously the paedophile priests are among those looking for mercy at all costs. And the reference elsewhere in his speech to treating elderly criminals gently smells too much of the anxieties of those clergy whose vile crimes catch up with them decades later.