Traditionalists and progressivists: the two prodigal sons of the Synod 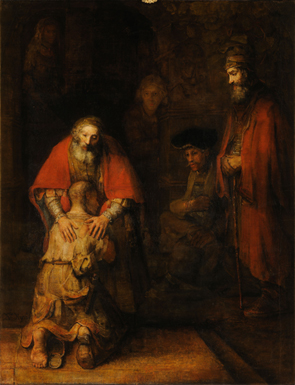 Reading through the five temptations Pope Francis spoke of in his speech at the end of the two-week Synod on the Family it became clear to me that ultimately our temptations broadly fall into two categories: of the prodigal son who left his Father’s house, and the other who stayed.

But they are both lost.

Two books by Henri Nouwen can help us understand the challenge we face as the Church in the modern world, The Return of the Prodigal Son and The Wounded Healer. In The Return, meditating on Rembrandt’s famous painting of the scene (left), Nouwen articulates how all of us are disloyal to our faith, firstly by rebelling against what is taught as the boundaries which we must not trespass, and secondly by remaining obedient to these boundaries but losing the loving heart of mercy for which the boundaries are there as a support.

In The Wounded Healer, Nouwen reflects on the reality that the Catholic Church has lost and is still losing its authority in the modern world because people no longer tend to adhere to traditional structures of authority. What this generation will respond to is an authority of tangible compassion that is rooted in the overwhelming experience of God’s gratuitous love and mercy, the authority that comes from the interior awareness that we too are in some way as wounded as those we seek to witness to.

Fr Alan Fudge used to preach that the moment of the Prodigal Son’s conversion comes not when he “comes to his senses” and hatches his plan to return to the Father, but when he experiences his Father’s merciful and thoroughly undeserved loving embrace. Is this not true for us? We experience transformation and reconciliation with God not when we wearily trudge back to the confessional, but rather when the words of comfort and absolution are spoken, when we experience the undeserved merciful love of God. St Therese of Lisieux taught us that “Everything is Grace!” The son who remained and hardened his heart against his Father’s grace cannot accept the mercy his Father has shown to the brother he no longer recognises. He is just as lost as his brother, if anything more so, because he has not “come to his senses” and realised his rebellion, nor the love his Father offers him in response.

While the synod was ongoing it was clear to see the sin of the second son apparent in some of those “traditionalists” who objected to the heartfelt and merciful approach that was being sought. The disloyalty to the current Pope was as naked as the disloyalty that the “progressivists” showed to his predecessor. Arguably this new disloyalty is worse, because it is the “traditionalists” who have always sought to defend and proclaim the primacy and authority of the Pope. Given that this was a pastoral synod and not a doctrinal one, doctrine would not nor could not be changed as a result. To then claim some kind of underhand conspiracy by Pope Francis to change doctrine by covert means is to abandon the very faith that tells us the Pope is chosen by God.

In his closing speech the Pope remarked that it was not adequate to “welcome” the lost, but to go and find them. Those who would reject this approach perhaps need to beware the sin of the son who remains in his Father’s house and is yet lost.

Above: Rembrandt's The Return of the Prodigal Son, housed at the Hermitage in St Petersburg/Google Cultural Institute

As for Pope 'chosen by God', clearly a full elucidation of the process shouldn't need to be repeated whenever it is referred to, suffice to say I agree with what is outlined here:

On what basis do you suppose that I support those in ongoing adultery to full reception of Holy Communion....?

As to the "prodigal" in this article, I might suggest this. Mercy and compassion ARE important to the emerging generation(s).

Authority itself carries a lot less weight than it used to. The loss of authority is in part because of the "tone" taken by those in positions of authority. The perception, correct or not, is that bishops are severely out of touch, and don't really CARE about the laity. This is a matter of power and control. The church simply HAS to move away from that kind of authority, to a "partnering" approach.

To build the trust needed for that kind of partnering, it's going to need to develop credibility. That STARTS with holding it's bishops accountable. Until it can, there will be little trust, for the perception will be of a double standard. Fix that problem, and the door opens to trust.

Once there, the approach to authority has to be more pastoral, more of a "partnering." That "partnering" will require meeting people where they actually are in life, withholding judgment, and entering a true dialog with them.

This is a long haul project. But it's as urgent as the very future of the church itself. What parent always agrees with their children? The church is bleeding out it's young. If it wants them back, it's going to have to do what Jesus taught, namely, to go meet them where they are, to talk with them, to understand, and at all times, greet them with mercy and compassion.

THEN the real work can begin. Demanding obedience won't work.

“Everything is Grace." Indeed it is! Every time I wake with the intention of attending Morning Prayer and Mass, and actually follow through, I know I’m graced. Every time I pray in the cold, stark abbey church, I know that Grace alone has brought me there. Every time I cup my hands to receive the Body of Christ, I know I am an unworthy recipient of God’s fullness, Grace upon Grace.

The wayward son forgets his scheme to get back into the Father’s graces when he sees Grace offered without a word needing to be said. It was good to be reminded that Grace which brings love and healing is ever-present and all we have to do is open our hands.

In the context of my sinful, marginalized life and imperfect religious practice, I’m not sure what a “state of Grace” is anymore. I know what paras 1415 and 2120 of the catechism say about the required disposition when approaching Holy Communion but don’t see how these apply to me. If I observed these injuctions, I'd starve and die. If I believed everything that my righteous brothers and sisters tell me about myself, I’d be wallowing in a mire of self-hatred and loathing but such a situation is incompatible with what Grace tells me – that I am truly loved and the apple of my Father’s eye.

Re-reading the story of the Prodigal Son, I have to wonder when the last time was that the righteous son accepted any sort of heartfelt, Grace-filled contact with his father. He might need just to turn and embrace the Father's love so freely offered.

St Paul in 1Corinthians 11 seems rather more preoccupied by women’s hats, or lack thereof, than the sick approaching the Healer.

"It was clear to see the sin of the second son apparent in some of those “traditionalists” who objected to the heartfelt and merciful approach that was being sought". This is either a deliberate misrepresentation or a failure to understand what was going on.

It is not simply the case that the question of who can be admitted to communion is a matter of “mercy”.

Communion depends on being in communion with the Church, and being in a state of grace.

The first is the reason why non-Catholics cannot receive communion (how can you receive a communion when you do not believe that it is the Body of Christ and you do not believe in the authority of the Church) and the second is the essential prerequisite for Catholics to communicate. This is not due to the Church having some kind of desire to control, not to show mercy or so on but because communion is the true Body of Christ and, as St Paul says, he who eats or drinks it unworthily eats and drinks death unto himself.

How would it, therefore, be merciful to admit all and sundry to communion when all that would be achieved thereby would be a worsening in, rather than an improvement in, their spiritual situation?

As for this idea: “the very faith that tells us the Pope is chosen by God” is the most utter nonsense. The Conclave prays for the guidance of the Holy Spirit, yes, but the Church does not and never has taught that the Pope is chosen directly by God.