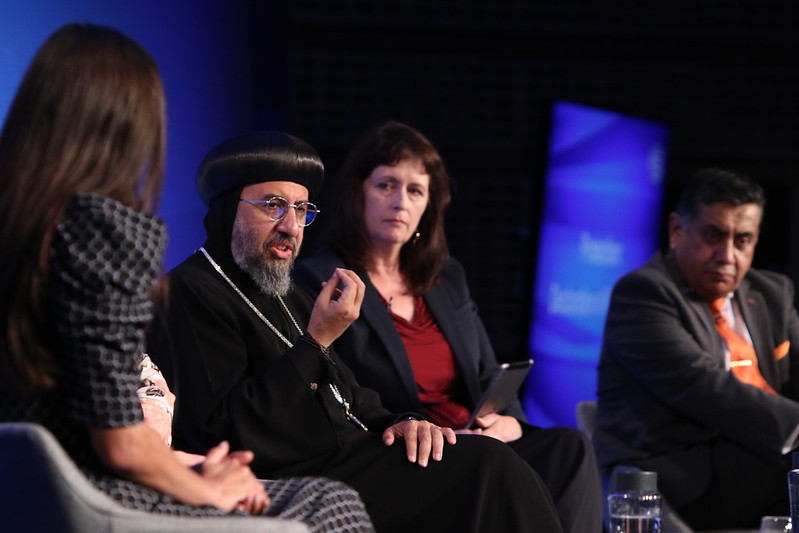 How long can the world cope with the religious freedom crisis? The reality is minorities are in the grip of deep malaise. 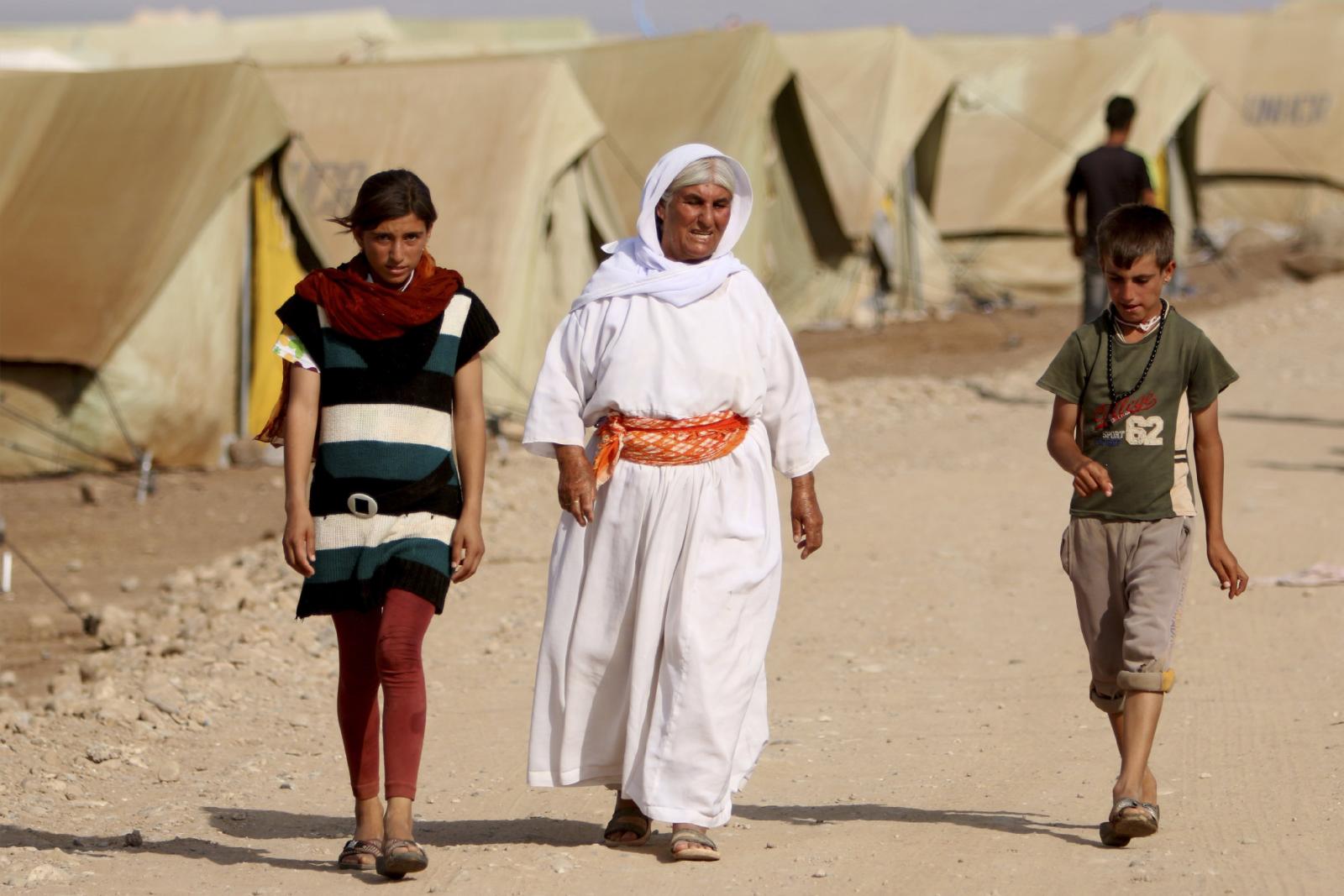 Refugees from the Yazidi religious minority, forced to flee violence in the Iraqi town of Sinjar.
CNS photo/Rodi Said, Reuters

The London ministerial conference on Freedom of Religion or Belief has served as a reminder that religious freedom is fractured beyond repair, and we must act now before it’s too late, writes Qamar Rafiq.

The religious freedom crisis and its consequences are nothing new. I have suffered at the very sharp end of a system where only religious identity determines your status, freedom, and opportunity.

There wasn't space for me to survive and thrive. Hence, I was compelled to leave my home country. I gave up so much more than the sun and sea to rebuild my life in England. These are life-changing experiences which go beyond pain and suffering. I urge when the nightmare is over, we must evaluate who owes an apology for all those long painful years of subjugation that victims of religious oppression face.

Study after study has revealed that religiously motivated extremists and non-state actors continue to target religious minorities. And faith communities not only face brutal robbery of their rights but also the challenges which include the vandalism of their sites of worship and discriminatory laws, which has aggravated the situation to horror. Similarly, the crimes of forced conversion, abductions and enslavement of minority women and girls are among the biggest human rights issues in the arena.

Welcome to this new era of breakdown that affects us all.

Atrocities in the name of religion have made the case that FoRB is under sustained attack a concern we can't afford to overlook. On 5 and 6 July 2022, the United Kingdom convened the International Ministerial on Freedom of religion or belief (FoRB) to engage with civil society, religious actors, and governments for a global action to address the underlying threat. Indubitably, it is a colossal mandate and it won’t flourish without leadership, strategy, and change.

Thankfully, Britain has not only taken a leadership role in advancing the cause but also pledged to ripen herd instinct by strengthening its partnership with International FoRB Alliance.

During the FoRB prayer breakfast, I had the opportunity to meet government officials, religious leaders, survivors of persecution, and civil society organisations from around the world. It soon became clear from these conversations that the religious freedom crisis that has become an international tragedy.

The Prime Minister’s Special Envoy for FoRB, Fiona Bruce, highlighted the necessity for robust engagement with governments, civil society, and academics to advance religious freedom and associated rights. Lord Ahmad of Wimbledon spoke about the power of prayer and faith when human solutions fail to guide you. He urged delegates to remember the golden thread of life is “Love for all hatred for none”.

The event featured the genocides of religious minorities, such as the Hazaras in Afghanistan, the Baha’i in Iran and the Yazidis in Iraq, which has brought awareness to the bleak situation that continues to be neglected by law enforcement, media and governments around the world.

The event also brought to light to the kind of political discourse that is fundamentally driven by religion and that has crushed the values of democracy. Perhaps, we cannot protect our living world until we revolutionise our political systems in order to safeguard the social, economic and civil rights of faith communities.

In his remarks during the panel session, Bishop of Truro Philip Mounstephen said the key challenge is to keep up the momentum around the issue. “We must not let it sink back into the place that it was before, largely ignored and overlooked.”

A lifelong champion of persecuted people and victims of genocide, Lord Alton of Liverpool emphasised the significance of detecting the beginnings of genocide. He has been repeatedly urging the UK Government to put in place adequate frameworks to thwart the monster of genocide.

I was incredibly honoured to meet Rashad Hussain, ambassador-at-large for international religious freedom. I was especially inspired to learn about his passion and dedication to working for a common cause. I will always remember him as a phenomenal religious freedom champion who has the power of listening.

As a victim of persecution, I can see the ripples of hatred are widespread in many countries for being merciless about dispatching minorities to second even third-class citizens which puts the country in such a grisly place for minorities.

In 2021 more than 4,650 Christians were killed in Nigeria, roughly 13 per day, or about one killing every two hours, according to a report by the international watchdog Open Doors. Nigerians face systematic threats to their right to freedom of belief and Boko Haram jihadists and other armed insurgents repeatedly attack civilians based on their beliefs. Similarly, Pakistan’s failure to safeguard the fundamental rights of minorities hasn’t only amplified the trend of misuse of blasphemy law but also thrown poor minorities into deeper deprivation since 30,000 jobs allocated for minorities remain vacant for years.

Equally appalling is the situation of 130,000 Muslims in Burma who remain in government-run internment camps. The US State Department in its annual report to Congress on international religious freedom has alleged that in India in 2021 attacks on members of the minority communities occurred throughout the year. One question above all strikes at the heart of India’s democracy’s uncertain prospect of religious freedom: who belongs in today’s India?

We need a coordinated global effort to combat our existential crises – the rising tide of blasphemy laws and stockpiling of human rights abuses. That is why Britain has propelled a clear message to the world that religious freedom is fractured, beyond repair, and we must act now before it's too late.

The issue has received much attention after the Foreign and Commonwealth Office (FCO) has stepped up its commitment to FoRB. In recent years, the British government has taken every possible step to champion freedom of religion.

In September 2018, Jeremy Hunt, British Foreign Secretary, worked hard on the plight of the Rohingya Muslims, who are targets of a brutal campaign of ethnic cleansing mounted by the army of Burma.

On the other hand, he warmly welcomed Bishop Mounstephen’s report on Christian persecution and its recommendations on 8 July 2019. Noting the worsening situation of the Hazara community and highlighting the risk of a possible genocide, a UK Parliamentary inquiry was launched in April 2022.

The London summit last week was a consequence of the UK's commitment to champion FoRB globally through the FCO’s diplomatic network, partnering with faith groups and working together with the countries of concern.  Isn’t it frightening that a minority facing endless oppression now feels afraid, not being reassured? At worst, the religious freedom agenda risks being derailed, by parroted rhetoric of the governments which is often followed by pledging more excuses.

From Myanmar to India and Nigeria to Pakistan, religious minorities wallow in the myths of denialism. How long can the world cope with the religious freedom crisis? The reality is minorities are in the grip of deep malaise and exhausted by efforts to find havens from tyranny. What happens when denialism bites?