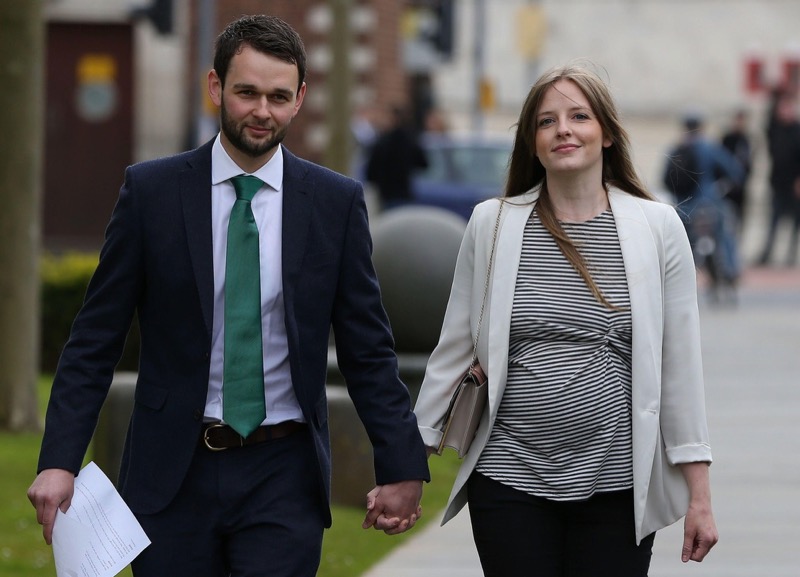 The icing on the Ashers bakery cake case

Will Pope Francis ever speak out about the children of priests? 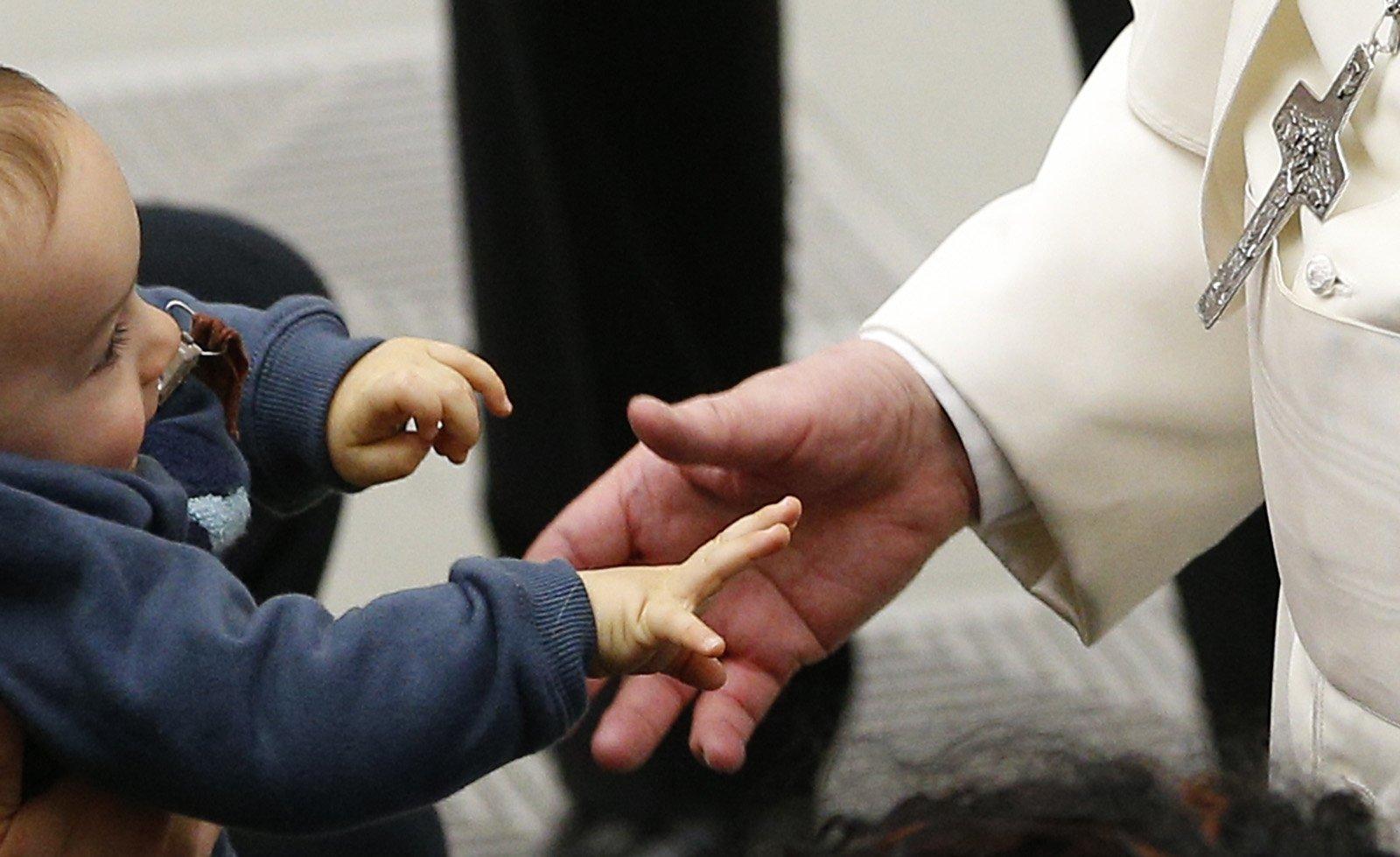 Pope Francis greets a baby during his general audience in the Paul VI hall at the Vatican.
CNS photo/Paul Haring

An Open Letter to His Holiness Pope Francis.

It has been over seven years since we met, seven years since I kissed the Fisherman’s Ring on the steps of Saint Peter’s. In this time, I have done all that I can to raise the plight of the children of the ordained and religious, a term I first learned from Archbishop Ivan Jurkovic, the Nuncio to the UN. I have done this, because I believe God wishes me to do this.

What have I learned? I have learned that Pope Saint Paul VI referred to clerical incontinence as the “lamentable defection”, thus, contextualising the children of the ordained and religious as offspring, denoted as “lamentable” and socially “defective”, or so it would seem from the continued silence on this issue.

You have spoken on many deserving topics, homosexuality, you spoke about abuse of nuns (it was then I thought you might make the extra step and speak about their children), and most recently families and pets. You even met former priests, again here I believed: “Maybe now, he will speak about children of priests?” I was wrong. You remained silent.

Bill Kilgallon, former Pontifical Commission for the Safeguarding of Minors addressed you over four years ago and advised that the safeguarding commission would take up the cause of the children of the ordained. Maybe this is the reason for your silence on this particular issue, are you awaiting feedback from the commission?

The commission has not engaged in any real or meaningful way, or in a manner that would indicate that something tangible could emanate from data that could have been provided, qualitative and quantitative.

So, Your Holiness, if you are awaiting feedback from your commission on this issue, don’t hold your breath. Why has it taken the Commission more than four years to write two private letters citing the “importance” of this issue, and nothing besides? They have issued no statement publicly about this issue. I personally feel let down by your commission and I believe you should feel likewise.

So often you have spoken after the Angelus, or after an audience or on a papal flight and I have hoped against all hope that you would say the words: “The children of the ordained and religious.” But each time, my hope dies. Vatican staff have admitted to me on record that the procreative lamentable defection is an inevitable aspect of consecrated chaste celibacy, a wound that drowns children muted by the institutional hand of their own parents over their mouths from birth to death.

Have you ever considered the effect of the trauma that befalls the child of the ordained and religious, via the mother, in utero, trauma that arises as a consequence of imposed silence, an ancient institutional silence? It denatures the organic processes that God Himself designed and harms the child before they ever see the light of day, or the sight of fear in their mother’s eyes. Herein, the sacrifice of celibacy belongs to the child and not the father.

During the Covid pandemic, I heard of a priest who insisted on abortion of his child; he did not want the bother of another secret child; to this day I am unsure if the child lived or died. Had his bishop spoken on this issue compassionately, maybe the woman would have felt more courageous and would have approached the bishop. But no, neither he nor anyone above the priest said a word on the issue and so she said nothing and never contacted Coping ever again.

Your priests are aborting children and if they do not abort them, they are using all manners of nefarious techniques to hide their offspring. The Pennsylvania Report, the French report on abuse, both refer to the connection between abuse and children of priests, and ephebophilia. The reports of the late Sister Maura O’Donohue and Sister Marie McDonald over two decades ago connect rape of female religious and their children, and an aftermath of forced prostitution and polygamous marriage as a future for the young mothers, once ardent with a naïve vocation. What of these children today and their mothers?

I have been advised of a cardinal with more than one child, and only last week, an 80-year-old woman contacted me from Northern Africa, trying to make peace with her late Irish father’s family, from whom she was so forcefully disconnected. All the protagonists of her story are long dead, what lives is the pain, the very real pain of a child inside her. Though we are trying, the Provincial in question remains silent, maybe he hopes she will die instead? Maybe she will?

You once said, referring to children of priests that “he has the right to the face of [his] father.”[1]

Do you still believe this as Pope?

Will you have the courage to change the language so closely associated with people like me, and my brothers and sister children of the ordained globally? This is a language that predates Pope Sirice (384-399) who once spoke about priests/religious “returning to their old vomiting and wallowing ponds, of [...] forbidden liaisons whose the manifest incontinence [...] was manifested in children born.”

‘Lamantable defection’ … ‘we keenly regret’, ‘vomiting and wallowing ponds’; this is awful language to associate with any child!

How can your church, Your Holiness, condone such a linguistic attack upon a child from conception?

If so, will we explain away today’s mistakes, tomorrow, with ‘cultural context’ and if not, then are not our mistakes today intrinsically wrong regardless of context, and thus deserving of apology or at least a change of narrative today or indeed tomorrow?

The Vatican official whom I referenced previously confirmed, people like me and others like me, are inevitable.

Inevitable Your Holiness, we are the only “scandal” that biologically cannot go away, for God has designed it so.

I am asking you to have the courage to take the microphone and answer these questions:

Imagine a church that cared for all children, Your Holiness?

Until the church faces these questions and this issue raised here, your church is failing the hidden children of your priests, bishops, nuns, and cardinals and all for appearances and will continue to do so as long as ego reigns and God Himself is silenced, for "as you did it to one of the least of these [...], you did it to me."