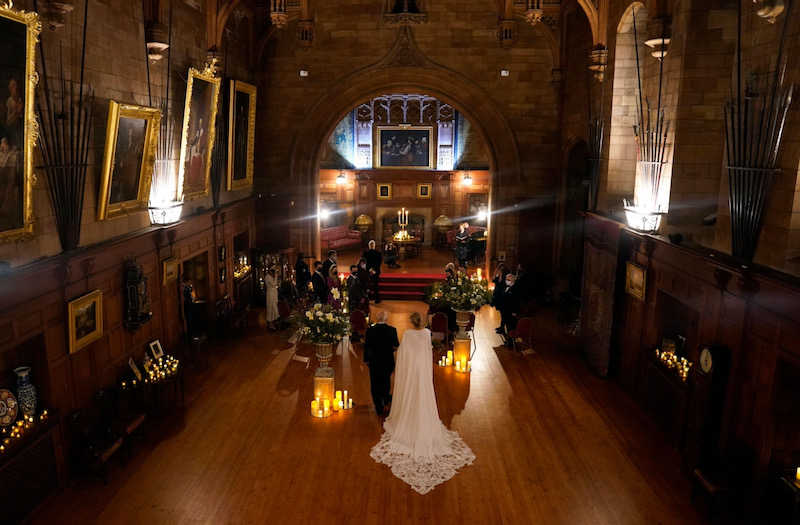 All haste to the Covid wedding It’s my first column for six weeks and by happy coincidence the date of publication – 7 June – is the feast day of St Robert of Newminster, the perfect excuse for me to write about my favourite nerdy pursuits: obscure saints, medieval monasteries and northern England.

Abbot of a small Northumbrian monastery in the mid twelfth century, St Robert wasn’t exactly popular, even in the Middle Ages. But his fascinating life encapsulates the religious, social and intellectual dynamism of his age, his later veneration showing how his enshrined relics provided identity, friendship and miraculous protection to the monks of his abbey and those living in its locality.

Most of what we know of St Robert comes from a Life, a sort of holy biography, written in the middle of the fourteenth century by a priest called John of Tynemouth. Even allowing for the flowery, laudatory conventions of medieval hagiography, it’s clear that Robert was a man of exceptional talents.

The son of pious, well-to-do parents, he was born in the Craven district of Yorkshire in the early decades of the twelfth century. Robert was destined for greatness from an early age. Eschewing the “levity and games of childhood”, he set off to Paris and its nascent university. Here he excelled at theology, precociously penning a now-lost work on the psalms. Returning to Yorkshire, Robert became parish priest at Gargrave in his native Craven. But he soon heard the call of the cloister, becoming first a Benedictine at Whitby, soon leaving to become a founding member of the austere, white-clad Cistercian community at Fountains.

Here Robert found his true vocation. In 1138, he was chosen to lead a colony of monks sent to found a “daughter house” of Fountains called Newminster, or the “New Monastery” near Morpeth in Northumbria. Under Robert’s wise and inspirational leadership, Newminster soon prospered. The local elites made generous gifts of land and the abbey attracted so many recruits that it was soon able to establish daughter houses of its own.

Robert embraced the physical hardships that the Cistercians believed were essential to live the “angelic” life here on Earth. His austerities were such that he was rewarded with a visit from a “messenger from Heaven” disguised as a pilgrim. However, Robert also had less welcome visitors. Like many of his saintly contemporaries, the abbot experienced visits from the devil himself.

Robert’s holiness was such that he always came off the better from these encounters – one was on a Newcastle street corner, Robert thwarting an attempt by the devil to cause bloodshed and mayhem on a scale worthy of Game of Thrones. Members of the Newminster community, however, weren’t always so fortunate. Their number included a young man training to become a lay brother, who after being ensnared by the devil, left the monastery to became a common thief, which ultimately led to his beheading.

The description of this sorry episode in Robert’s Life left me rather sympathising with the unfortunate young novice who clearly wasn’t cut out for the cloister. Indeed, any lapse from the impeccably high standards of internal life and external observance demanded of Cistercian monks was attributed to diabolic intervention, thus putting the soul of the offender in jeopardy. This left many monks in a constant state of spiritual anxiety and physical misery.

Given that Robert demanded such high standards of his community, it’s not entirely surprising that his frequent visits to provide spiritual counsel to a noble lady in her castle raised a few eyebrows among his brother monks. Allegations of impropriety soon reached the ears of St Bernard, the greatest of all Cistercian saints, causing Robert to make the arduous journey to Clairvaux, Bernard’s own abbey, to clear his name. This he accomplished with ease, and in a rout for his opponents, Robert became a firm friend of St Bernard and through him secured an introduction to the Pope.

Saints attract other saints and Robert’s circle of friends included Godric, the hermit of Finchale, another great holy man of the twelfth-century north. The bond between them was such that when Robert died on 7 June 1159, Godric was granted a vision of his soul, described as being like a fiery sphere, being taken up to Heaven.

This was a sure indication of Robert’s sanctity. He was buried first in the chapter house at Newminster, his relics later translated to a precious metal shrine in the abbey’s church. Numerous miracles were attributed to him. These included the restoration of a raving lunatic to sanity and St Robert intervened twice in aid of a Newminster monk. On the first occasion, the monk was cured of fever after praying at the saint’s shrine in the monastic church. Later, while whitewashing the monks’ dormitory, the same monk tumbled from a ladder towards the hard stone stairs leading to the church but was miraculously saved from injury after invoking St Robert’s assistance.

People in the locality of Newminster also venerated St Robert, paying for wax candles to burn before his shrine and providing “proper food and drink” for the Newminster monks on the saint’s 7 June feast day. A book owned by St Robert was venerated as relic and the abbey possessed a “girdle” of the saint, a portion of his monastic habit, which was tied around the midriffs of women during labour in the belief that it would miraculously ease the pains and dangers of childbirth.

St Robert’s fame reached its apogee in the early sixteenth century. In 1516 an English description of holy deeds and “many myracles” was included in a printed collection of English lives. It was a brief, final flowering of his cult. In 1537, Newminster was an early victim of Henry VIII’s Dissolution of the Monasteries. The fate of the saint’s relics isn’t recorded but it’s probable that the bones of this revered holy man were deliberately targeted for destruction.

Despite the work of Henry and his henchmen, St Robert remains a focus of veneration, identity and pride for Northumbrian Catholics to this day. The parish church in Morpeth is dedicated to St Robert, the shattered remains of his monastery the destination for processions and pilgrimages.