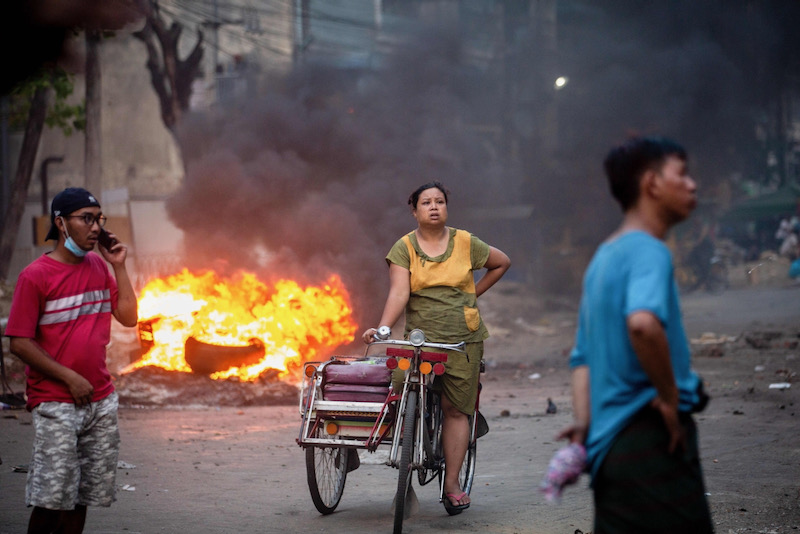 'As I look at Myanmar today, I weep'

A relic of the True Cross in a 14th-century reliquary.
Michael Carter

Which of the following statements has you nodding in agreement?

“Names of the saints whose relics are kept here at Battle. First, from the wood of the Cross of the Lord [the True Cross], which is the Holy of Holies.”

“There is no monastery so poor that it does not have a specimen…if we were to collect all these pieces of True Cross exhibited in various parts, they would form a whole ship’s cargo.”

The first comes the prologue to an inventory of sacred relics at Battle Abbey, the second is a quote from John Calvin’s 1543 Treatise on Relics.

I’ll bet that even a substantial portion of Tablet readers will find itself more in sympathy with the comments of the Protestant firebrand Calvin than the conventional fifteenth-century piety of the Battle monks. Indeed, when it comes to medieval religion, few subjects are more likely to bring out a person’s inner Richard Dawkins than the subject of saints’ relics. Especial scorn is often reserved for purported relics of the True Cross – fragments of wood from the cross on which Christ suffered and died.

But I urge you to park your derision and temper your skepticism about this most sacred, if admittedly contentious of relics. In this timely column for Holy Week, I’ll explore the history of the True Cross, outline its rich medieval legend, the circumstances surrounding its dissemination across medieval Christendom and why there might not have been quite as much of it knocking about as Calvin asserted. I’ll also argue that the emotion and devotion engendered by the relic in the Mille Ages still has resonance in and lessons for twenty-first century, post-Christian Britain.

The history of the True Cross goes back to the days of the late Roman Empire and the pilgrimage made to the Holy Land in 326 by St Helena, the mother of Constantine the Great, the first Christian emperor. The circumstances surrounding the discovery of the relic are described in several late fourth and early fifth-century sources. There’s more than a hint of anti-Semitism in these accounts, which tell that while in Jerusalem, Helena compelled a Jew to reveal the location of the Cross.

Quite remarkably, his family was said to have had been custodians of this information since the time of the Crucifixion, three hundred years before.

Furnished with this intelligence, Helena assumed the role of archaeological site supervisor and oversaw an excavation that revealed three wooden crosses. This posed a problem – how to distinguish the cross on which Christ had been crucified from those of the two thieves who died by His side. The solution was provided by a passing funeral procession, the corpse miraculously restored to life by the True Cross – the first of countless miracles attributed to this most potent of relics.

The Cross then experienced the first of innumerable fragmentations. Helena directed that a portion should be sent to the newly founded imperial capital at Constantinople, another to Rome, while the rest, enclosed in precious metal and gems, remained in Jerusalem. This rapidly became the focus of veneration and pilgrimage. But disaster befell the relic three centuries later, when in 614, the Persians carried it away after their capture of Jerusalem. It remained in their hands until 629 when the Byzantine Emperor Heraclius restored it to Jerusalem, also dispatching a substantial portion to Constantinople.

By this time, smaller fragments of the True Cross had already been distributed across Christian Europe. In the late fourth century, Bishop Cyril of Jerusalem boasted that the wood of the Cross had “filled almost the whole world”. The pope in Rome and emperor in Constantinople used their portions of the relic as a source for prestigious diplomatic gifts, its splinters sent to kings and churchmen across Christendom. Among their number was King Alfred the Great who received a slither of its wood from Pope Marinus in 883.

In the early twelfth century, Crusaders returned from the Holy Land clutching what they believed to be portions of the True Cross. But within a century, Jerusalem and its relic of the True Cross were in Muslim lands. The subsequent crusade, led by King Richard I (the Lionheart), recovered neither the Cross nor the holy places. Richard did not, however, leave the Holy Land empty handed. Somewhat conveniently, a previously unknown piece of the Cross came to light.  This Richard eagerly acquired, so too a part of Christ’s tomb, the Holy Sepulcre, which his brother, “bad” King John, gave to Battle Abbey in 1200.

Soon after Western Europe was replete with relics looted from Constantinople following its sacking in 1204 during the Fourth Crusade. Fragments of the True Cross, by then believed to be made of three woods – olive, palm and cypress – found their ways into countless cathedral and monastic treasuries. Among the recipients was Hailes Abbey, which in 1295 received a portion of the True Cross from its patron, Earl Edmund of Cornwall, who a quarter a century earlier had bestowed a relic of the Holy Blood on this Costwolds monastery.

In keeping with their immense spiritual value, relics of the True Cross were housed in specially made precious metal, cross-shaped reliquaries. To facilitate veneration – and doubtless to also prove its presence - the relic was often mounted on the exterior. In most instances, the relic consists of nothing more substantial than a few diminutive splinters.

Calvin may well have been correct about the multiplication of True Cross relics across late medieval Europe. But this doesn’t necessarily mean that there was the tonnage of holy wood in circulation that he claimed. In 1870 a French amateur historian drew up a list of known fragments of the Cross, calculating that when added together, they didn’t provide enough mass for a third of a cross capable of supporting the weight of a man. Whether this work would stand up to the rigours of modern scholarly pre-publication peer review is open to question.  But it’s worth noting that the medieval mind didn’t see anything wrong with the continued fragmentation of the Cross. Each minuscule piece was invested with huge spiritual power and significance and the dissemination of its fragments provided a shared focus for belief and devotion across Christendom.

Nor were medieval people stupid. They knew full well that fake relics were circulating, meaning that like a valuable artwork today, a decent provenance mattered. Then, as now, it helped if there was a documentary trail, the authenticity of a relic especially likely to be accepted if it had passed through the hands of prominent members of the medieval one percent. Indeed, it’s probable that many relics of the True Cross in existence today derive from portions venerated since medieval times.

What about the status and relevance of these relics today? In early 2019, I visited a fascinating exhibition on relics at the Catherijne Convent Museum in Utrecht. This explored the role of relics not only in Catholicism and Christianity but also in other world faiths. The final room was a real eye-opener; its exhibits including modern mementoes of lost loved ones and souvenirs used to conjure memories – in effect contemporary, secular relics.

This provides lessons for how to make relics of the True Cross relevant for contemporary, often post-Christian audiences. Radiocarbon dating has shown that several relics of the Cross in fact date to centuries after the life of Christ. Although condemned in the media as fakes, the Church’s view has been more sanguine, focusing on the relics as a focus of veneration, as a medium to the Divine, of spiritual nourishment and betterment.

My attitude as a historian is also indulgent, and I’d argue that regardless what you think about their authenticity, fragments of the True Cross, indeed all relics, provide a way of connecting with and elucidating the sacred and material in the Middle Ages. I’d much rather understand than condemn.