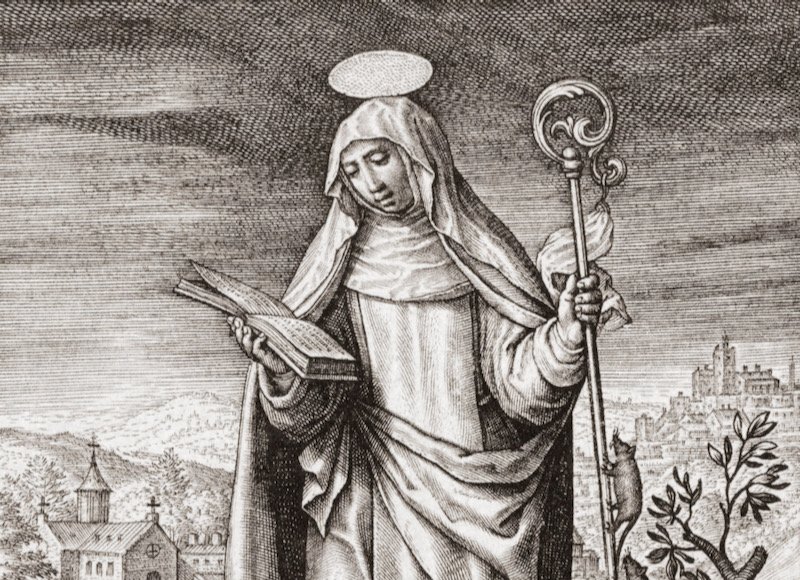 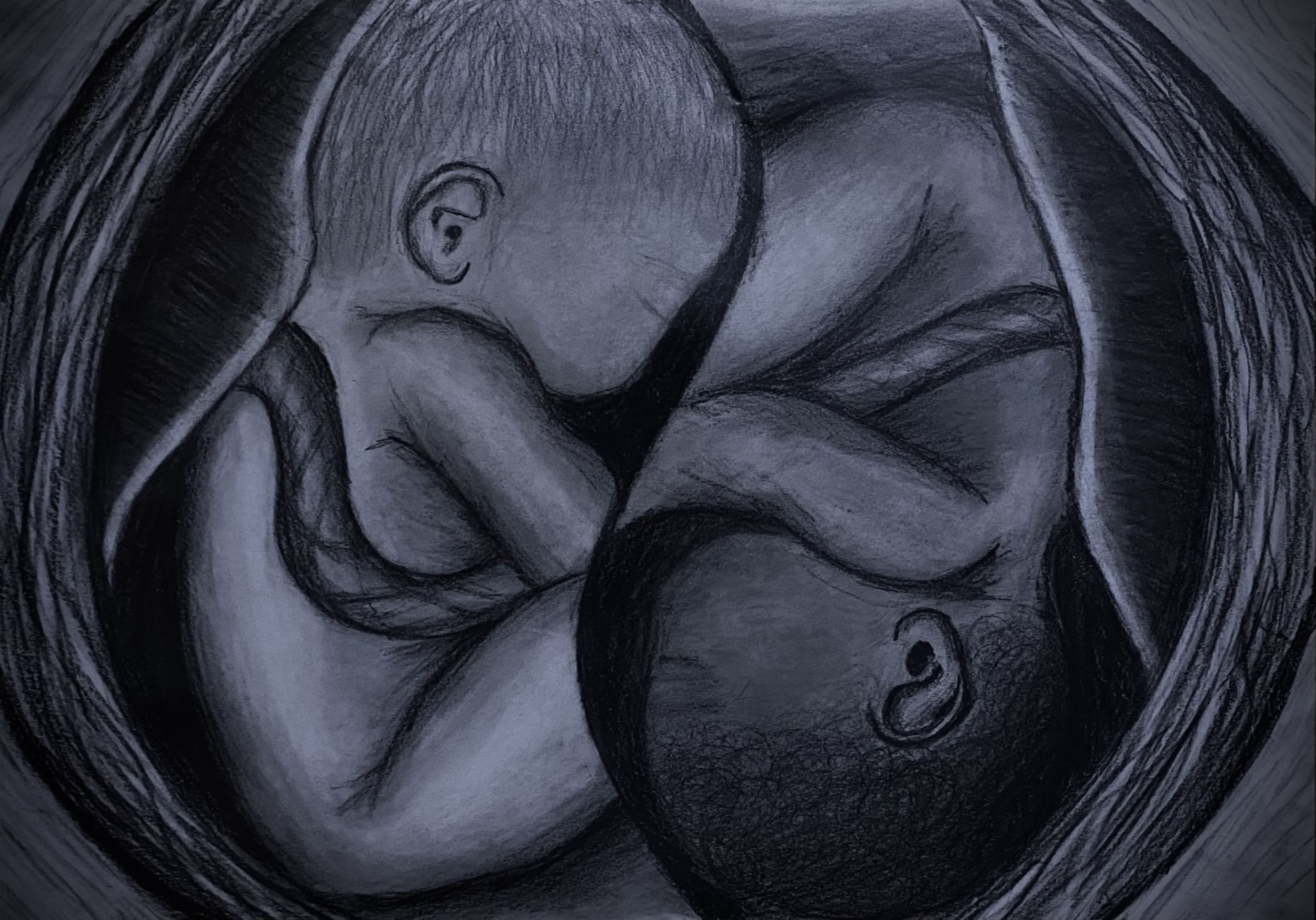 'The beginning of life. We are brothers and sisters so why should one be treated differently?' Second-placed image.
Dior Knorr

Reading through the entries in the Columban Schools Competition, Let’s create a world without racism, I felt so proud of the young people in our Catholic schools in Britain and Ireland who submitted articles and images. Their searing experiences scalded me too, but their honesty, insight and hopefulness, despite casual and institutional racism, were inspirational.

Racism was chosen as a topic by the Columbans for its 2021 competition after many young people joined street protests on Black Lives Matter last summer. The fourth annual competition, it was the most popular to date, with the two strands of articles and images attracting almost 300 entries from nearly 100 schools. Competition results were released in the lead up to the International Day for the Elimination of Racial Discrimination on Sunday 21 March 2021.

So, from the articles we learnt that racism is indeed a burning issue for young people and a key reason is that they have widespead experience of it, especially if they are BAME – an acronym for Black, Asian and Minority Ethnic. There were even a few surprising stories from Catholic schools. One writer talked of how hurt she was while standing chatting with a group of black girls in a playground to be asked to disperse because other pupils found them “intimidating”. But a key thread in many articles was being insecure about identity in the broader society which doesn’t always regard everybody as equal, and feeling profound fears for family members when they left the house. Many examples of institutional racism were provided, and yet a widespread conclusion too that society would benefit enormously if the issue was seriously addressed. Pope Francis was quoted many times. He said in June 2020, after the death of George Floyd in the US, that, "we cannot tolerate or turn a blind eye to racism and exclusion in any form and yet claim to defend the sacredness of every human life."

It is clear that many Catholic schools, especially in our cities, are multicultural and multifaith. Several winners – as in former years – have been Muslim. This is very much welcomed by the Columbans for whom interfaith dialogue is a key charism. Dublin City’s Interfaith Forum, for example, which includes Columbans, has produced an anti-racist training module as an online resource. The competition has raised awareness of Catholic Social Teaching, which underlines the dignity of all, and teachers are clearly doing a great job in forming young people with a sensitivity and passion about racism and a knowledge of heroes of anti-racism campaigning. 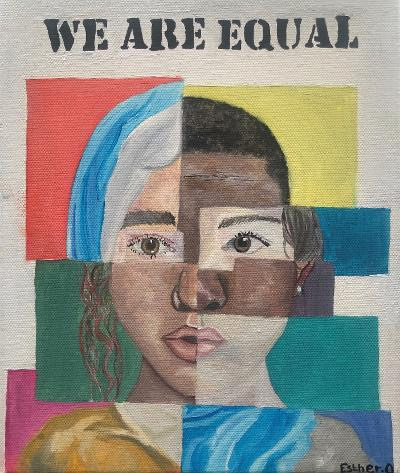 Esther Ojobaro, of St Paul’s Academy, London won first prize in the images category. She says: “In the painting I have created, I have merged together the faces of individuals of different ethnicities. I have done this to show that we shouldn't judge one another based on their race.”

The Columbans thank all those teachers in nearly 100 schools who put the competition before young people and encouraged them to enter. James Trewby, Columban Education Worker in Britain, felt the entries “brought passion, experience, and hope to an important issue.” William Scholes, the Irish News’ Religion Editor and judge, reflected that personal testimonies had shown, “a window into how racism isn’t just an academic or theoretical issue, but a lived one which can have visceral consequences.” In several articles, white climate justice campaigners – like me – were urged to see the climate crisis as a form of systemic racism, with fundamentally different risks for people of colour.

In Britain, Kashaf Zahid of Gumley House School in West London, wrote the winning article. Ruth Gledhill of The Tablet described it was, “an intelligent piece of journalism that draws on personal experience of the writer and others they know, and threads it through Catholic Social Teaching to create an argument that is both compelling and salutary.”  We felt for her, witnessing her sister being racially abused on a bus and her mother being refused entry to a shop amid the Covid-19 pandemic, due to her race. The shopkeeper believed that she was more likely to have the virus due to her ethnicity, despite her adhering to all the safety regulations – including a facemask - in order to care for her neighbours. However, Kashaf generously talked in her conclusion of the importance of kindness and of choosing to love and not hate.

The second place winner, Zane Sekhon of Worth School, East Sussex, bravely offered insight into different forms of racism, particularly the casual racism that many people may not consider when they claim not to be racist. “Describing himself as ‘an average kid’, he pointed out that he loves India as his cricket team ‘like it’s a guilty secret’ and loves England because ‘it’s his home’. He also pointed out that he loves his Catholic school and his Muslim faith and asks why, if they can co-exist in him and in his daily life, then why can’t they co-exist between people of all cultures and ethnicities?

In Ireland, Ella Fleming of St Dominic’s Grammar School, Belfast, wrote the winning entry that was, according to one judge, “a fantastically brave article, beautifully written; really profoundly moving.” Another described it as, “a poignant piece, that draws attention to the dangers and impact on a life that experiences racism.”  She opened with the fear of walking outside alone - “don’t make eye contact with the lady who is clenching her handbag tightly” – but urged readers to make the world better “while we still have a chance.”

The runner up article by Conn Fyfe of St Louis Grammar Achool in Ballymena suggested that as well as the Covid-19 pandemic “a second pandemic plagues us – Racism”. He applauded the leadership of Pope Francis for his vision of love in Fratelli Tutti, reminding us that, “love and compassion for one another should supersede all forms of hatred”. Poet Amanda Gorman was mentioned too for her poem, 'The Hill We Climb', presented at US President Joe Biden’s recent inauguration. “We will never again sow division” quoted Conn and commented that, “Christ’s message of love in his greatest commandment 'love thy neighbour' was reflected in the words of the 22-year-old whose advocacy of unity must not only be heard but listened to.” He concluded with, “we must harness the power that a universal, global approach would have in eradicating this pandemic and make the invisible entities of love, empathy and justice, visible.”  Amen to that!

The winning articles will be published online at The Tablet soon. A full list of winners and judges can be found at http://www.columbancompetition.com/