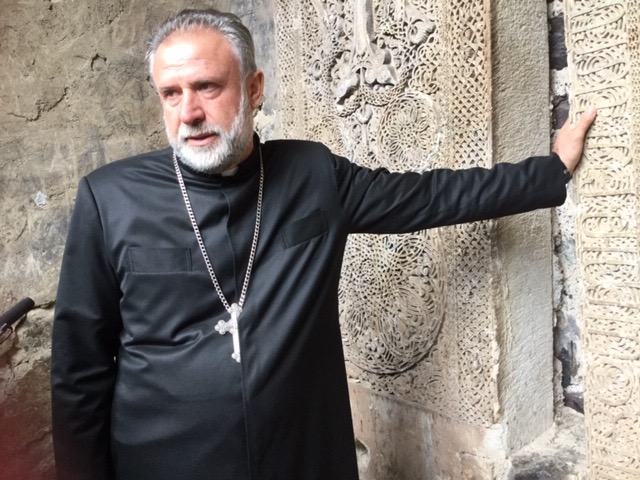 Fr Hovhannes and 800-year old kharckar, or stone cross, about to be sent away to Armenia to save destruction by Azerbaijan

While the pandemic stalks the globe, it masks other tragedies that befall humanity, particularly that most pernicious of evils: war. Recently returned from a trip in Nagorno-Karabakh, a tiny stretch of contested land in the South Caucasus recently the epicentre of a short but bitter war, it was all too easy to feel that there was no hope. But it was the people of Nagorno-Karabakh who gave me heart and confirmed my faith: they do not just survive; they create beauty from the ashes of destruction. During the dark days of war and of uncertainty, there have been precious few threads of hope to cling on to. But this people’s Christian faith shone through.

During a poignant visit to Dadivank Monastery, one of Christianity’s most ancient sites, built between the ninth and thirteenth centuries,  I met with three young women inside the monastery before it was handed over to Azerbaijan as part of the terms of the ceasefire agreed between Armenia and Azerbaijan.

In the midst of a clearly aching grief, one of the sisters turned to me, smiled and said “you have to be happy in a House of God”. I was struck by this strength of faith: in the middle of the trauma and tragedy of loved ones being killed, tortured and displaced, there was this unshakeable faith of those who have devoted their lives to the Church and to the good of others. What poignancy.

Of course, inevitably, church buildings had also reverted to their original meaning – that of a sanctuary.

They were accommodating refugees in their buildings. The Abbot of Dadivank Monastery, dismally preparing to transfer religious items, including church bells and kharckars into Armenia, wept at his forced departure from Dadivank and also at the lack of Christian brotherhood.

He lamented that nobody in the wider global Christian community had written, or called or expressed any solidarity with him or with his parishioners’ and pilgrims’ plight. He noted that while these were terrible days, “all Christians were silent”. Many Christians had to flee into Armenia, with no resources, while those remaining in Nagorno Karabakh are living in a war zone, lacking infrastructure, food, water and basic aid.

We are in the midst of Advent. Trivialised by many as an excuse to scoff chocolates in a calendar, it still belies an important point for those of faith: we count the days until the birth of Christ, the birth of the Saviour. So often in life we try to ensure that his sacrifice for us was not in vain. How much more must we do so when we see our Christian brethren under attack, their monuments and sacred items stripped of their Christian heritage, their very spirituality challenged. While Christ was the epitome of forgiveness, as a global Christian community, we have been too timid in the face of terror. We have stood aside and not called out injustice where we see it, nor granted solace to those who need it.

This Advent let us condemn atrocities and lend friendship and brotherhood to those who need it, including to those people of Nagorno-Karabakh who are suffering in this difficult time. For as St Paul said, when one part of the body of Christ suffers, every part suffers with it.

Caroline Cox is a cross-bencher in the House of Lords. She is founder and CEO of the Humanitarian Aid Relief Trust.