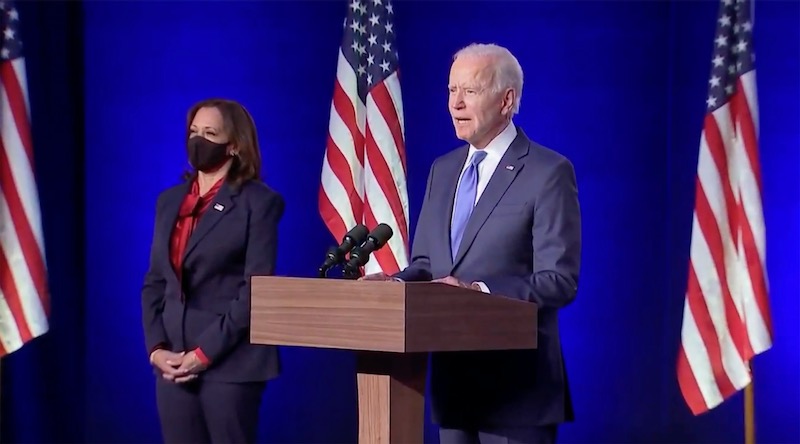 President-elect Joe Biden is a committed Catholic and his faith inspires and underpins everything he does.
CNS photo/Kevin Lamarque, Reuters

On Saturday, after several days of staring at the Electoral Map, CNN finally called the election for Joe Biden (Donald Trump’s beloved Fox News called it 15 or so minutes later).

It means Kamala Harris will become the first women, and the first woman of colour, to hold the office of Vice President. It also means Joe Biden will become only the second Catholic, after JFK, to become leader of the free world; Habemus potus.

Joe Biden’s Catholicism or lack thereof, became a point of contention amongst some during the presidential campaign. When he attended Mass in South Carolina last year, a priest refused to grant the Eucharist to the now-President-Elect given his voting record on abortion.

Father Robert Morey said: “Any public figure who advocates for abortion places himself or herself outside of Church teaching.”

It is worth noting, as Biden did when asked about this incident, that Pope Francis doesn’t appear to agree with this position given that he offered the Eucharist to Joe Biden. Biden also said that the priest went to the press with the story, and continued: “It wasn’t a position I have found anywhere else”.

First things first, Joe Biden is a Catholic. That is not up for debate; he is baptised into the Church and is also a practising member of the Church. On the morning of the election, he began his day with a visit to his church. He then visited his son Beau’s grave; he carries a pair of rosary beads Beau gifted him wherever he goes.

Biden’s biographer says “nothing is more sacred (to Biden) than his Church” and a Biden staffer says he is “an authentic person of faith”.

Secondly, something as important as the Eucharist should not be allowed to be turned into a political football. If we deny the Eucharist to people who are pro-choice, then where do we draw the line?

Should it be denied to people who don’t take environmentalism seriously, in light of the Laudato Si? As Pope Francis reminded us, the Eucharist “is not a prize for the perfect”.

Biden’s views on when life begins align with the Church. In a 2015 article with the Jesuit magazine America, Biden said: “I’m prepared to accept that the moment of conception is a human life convened.”

However, he also said: “I’m not prepared to impose a precise view that is borne out of my faith on other people.” In an older interview from 2005, he said he “had to prove that he wasn’t ruled by his beliefs” and he was “with John F Kennedy on the role religion ought to play in politics”.

Some Catholics would have you believe that Biden is not a “real” Catholic and that Trump was the preferred candidate for president given his apparent pro-life outlook.

Being “pro-life” is about a lot more than being against abortion. It is not pro-life to knowingly downplay a global pandemic, belittle those who wear a mask in order to protect and save lives, and to host super-spreading rallies (a recent study estimates Trump’s rallies have resulted in 30,000 additional Covid-19 cases and at least 700 Covid-related deaths).

It is not pro-life to lock children up in cages and separate them from their parents (the cages were built under the Obama administration but the use of them increased dramatically due to Trump’s zero tolerance policy).

Nor is it pro-life to downplay and excuse police brutality when African-Americans are being killed at an alarming rate by the police.

During the election campaign, Biden repeatedly said that “the soul of the nation is on the ballot”. Usually, this would be a very trite line but it truly was the case in this election.

On one side, is a serial liar. Trump made over 20,000 false or misleading statements while in office as of July. He is also a white-supremacist sympathiser and a misogynist with numerous sexual assaults allegations against him. The list goes on.

A man who, as Sister Simone Campbell reminded us at the Democratic National Convention, “ignores Catholic teachings on care for the Earth, feeding the hungry, welcoming the immigrant”.

On the other side is Joe Biden, a man who says Pope Francis is “the embodiment of Catholic social doctrine that I was raised with”.

Biden described this doctrine as follows: “The idea that everyone’s entitled to dignity, that the poor should be given special preference, that you have an obligation to reach out and be inclusive.”

In a later interview, he said his “faith implores me to embrace a preferential option for the poor”.

When the election count was too close to call, and when Trump tried to cast doubt over the legitimacy of the election, Biden told us to “keep the faith”. Biden’s Catholic faith has been a major part of what has been a life filled with grief and personal turmoil.

His wife and daughter died in a car crash in 1972 and his son Beau died of cancer in 2015. In an interview with Stephen Colbert, when asked how he copes with this grief, he said he finds “comfort” in going to mass and saying the rosary.

In the same interview with Colbert, Biden also quoted the Danish philosopher Soren Kierkegaard who said: “Faith sees best in the dark.” Biden said that all of the good things in his life have revolved around his faith and theology.

In his acceptance speech, Biden said in the run-up to Election Day that “he began thinking about a hymn that means a lot to me and my family, particularly my deceased son Beau”.  That hymn was On Eagle’s Wings.

Biden said the hymn “captures the faith” that sustains himself and that he believes sustains the United States.

He said: “I hope it can provide some comfort and solace to the 230,000 Americans who have lost a loved one to the terrible virus.

After quoting lines from the hymn, which is a Catholic hymn but popular across Protestant churches also, Biden continued: “And now together, on eagle’s wings, we embark on the work that God has called on us to do, with full heart and steady hands and a thirst for justice.”

Biden may not be a perfect Catholic, but who among us is? Catholicism can be messy and hard; St Paul was a notorious persecutor of Christians, Blessed Bartolo Longo was once a Satanist, Servant of God Dorothy Day had an abortion.

Trump’s administration was at constant odds with the teachings of Pope Francis; the Pope said many of his policies were “not Christian”, while Trump said Pope Francis was “disgraceful”.

How refreshing it will be to have a POTUS in Joe Biden who says his “idea of self, of family, of community, of the wider world comes straight from my religion”.