An African abbot in Anglo-saxon England 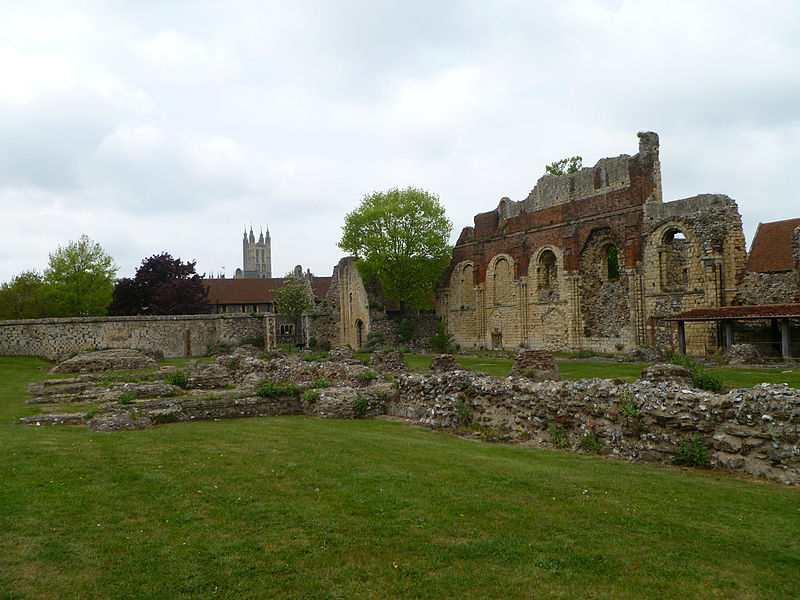 The ruins of Canterbury monastery, with Canterbury Cathedral visible in the distance
©Creative Commons/Wikimedia

The use of ‘Anglo-Saxon’ by historians has become embroiled in the ongoing culture wars. Its appropriation by white supremacists, especially in the United States, has made it deeply offensive to many. This has led to suggestions from historians on both sides of the Atlantic that its use should be dropped. They instead recommend the use of ‘early medieval England’ to describe the centuries spanning the withdrawal of the Roman legions in 410 to the Battle of Hastings in 1066.

But I’m not prepared to abandon the historical use of Anglo-Saxon to bigots and racists. This is especially because England between the 5th and 11th centuries was very far indeed from being the blond-haired, blue-eyed insular paradise of their pseudo-historical fantasies.

This is nowhere more apparent when it comes to the history of the Church, especially in the person of St Hadrian – or Adrian – of Canterbury. An African by birth and abbot of the Canterbury monastery of St Peter and St Paul (later St Augustine’s) at the end of the 7th century, Hadrian epitomises the international, even multicultural, character of the Anglo-Saxon Church. His multiple talents were instrumental in turning his abbey – and the wider Anglo-Saxon Church -  into an intellectual and cultural powerhouse of the medieval world.

Much of what we know about the saint comes from the pages of Bede, the Anglo-Saxon monk and historian. He was a near contemporary of Hadrian, who he says was “vir nationale Afir”, which has been variously translated as ‘a man of African race’ or ‘a native of Africa’. Bede adds that Hadrian was fluent in both Greek and Latin, suggesting that he was from a Greek-speaking province of the Byzantine Empire on the North African coast, likely Cyrenaica in modern-day Libya.

Christianity had deep roots in North Africa. By the time of Hadrian’s birth in around 630-37, the region had already supplied three popes. The Church’s thinking and teaching was shaped there by the likes of the theologian Tertullian (c. 155-c.240) and St Augustine of Hippo (354-430), a ‘Doctor’ of the Latin or Western Church and one of the most influential Christian authors of all time.

It’s likely that the Arab invasions of North Africa in the mid-640s forced Hadrian’s family to flee to Italy, making the same perilous sea voyage that has tragically claimed the lives of many thousands of refugees in recent years.

The young Hadrian prospered in his new home. Bede tells us he was “very learned in the Scriptures, experienced in ecclesiastical and monastic administration and a great scholar”. The Byzantine Emperor called upon Hadrian’s services as a translator and diplomat and he became abbot of a monastery near Naples.

His talents were also noticed by Pope Vitalian, who in 667 offered Hadrian the opportunity to become archbishop of Canterbury, the see established 70 years earlier by St Augustine of Canterbury (not to be confused with the 4th-century saint of the same name) as a base for the conversion of the Anglo-Saxons. Hadrian passed on the offer, suggesting as an alternative his friend, Theodore.

It’s worth pausing to say something about Theodore, whose own background also says much about the international richness of the Anglo-Saxon Church. Thanks to Bede, we know he was from Tarsus, a city close to the southern Mediterranean coast of modern Turkey. Tarsus was very much in the ambit of the Greek-speaking Church and Bede adds that although Theodore was a monk at a monastery in Rome, his departure for Canterbury was delayed by four months “for his hair to grow so that he could receive the circular tonsure, for hitherto he had worn the tonsure of the holy Apostle Paul in conformity to Eastern Custom.”

Theodore’s appointment came with a condition: that Hadrian should accompany him to Canterbury. Here they formed a formidable team. Hadrian was appointed as abbot of the monastery of St Peter and Paul, just outside the city’s Roman walls and destined later in the Middle Ages to bear the name of its founder, St Augustine (of Canterbury).

The learned Hadrian and Theodore established a school at the abbey which rapidly earned an international reputation for its scholarship. Bede recounts how Hadrian and Theodore ‘attracted a large number of students, into whose minds they poured the waters of wholesome knowledge day by day.’ The curriculum included the Scriptures, poetry, astronomy and the calculation of the Church calendar, then very much a hot topic in England. The school also pioneered the teaching of Greek in Anglo-Saxon England, opening up its nascent Church to a rich seem of hitherto inaccessible historical, mathematical, philosophical and theological writings.

Hadrian himself made his own contributions to scholarship and theology. Sadly none of his complete works are extant, but snippets quoted in the works of other Anglo-Saxon authors leave no doubt of his erudition and familiarity with the writings of Ancient Greek philosophers such as Plato, whose writings he was able to Christianise.

Pupils at the Canterbury school included Aldhelm (637-709), who was destined to become Bishop of Sherborne and a saint. He lauded Hadrian as a “respect father and a reverend teacher”, also praising his ‘ineffability and pure urbanity.’

Hadrian died in 709 and was buried at his abbey where he was venerated as a saint. His relics were rediscovered during building works in the 1091 and placed in a specially constructed shrine. Several miracles were attributed to Hadrian, and his protection was invoked by sailors “of Englonde which were lyke to haue been robbed by pyratis”.

Monks from the three known continents of the medieval world – Africa, Asia and Europe – all contributed to the shaping of Anglo-Saxon England and its Church. The rich legacy of Hadrian and his brother monks is far too precious to abandon to mongers of hate, ignorance and prejudice.