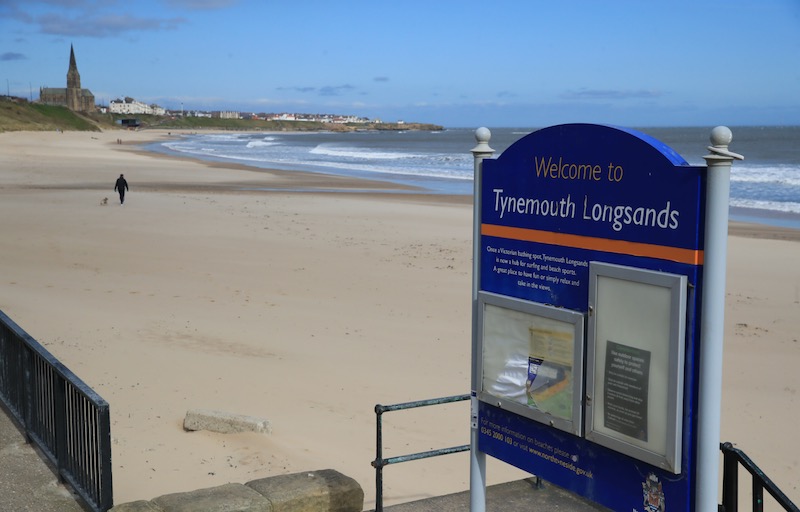 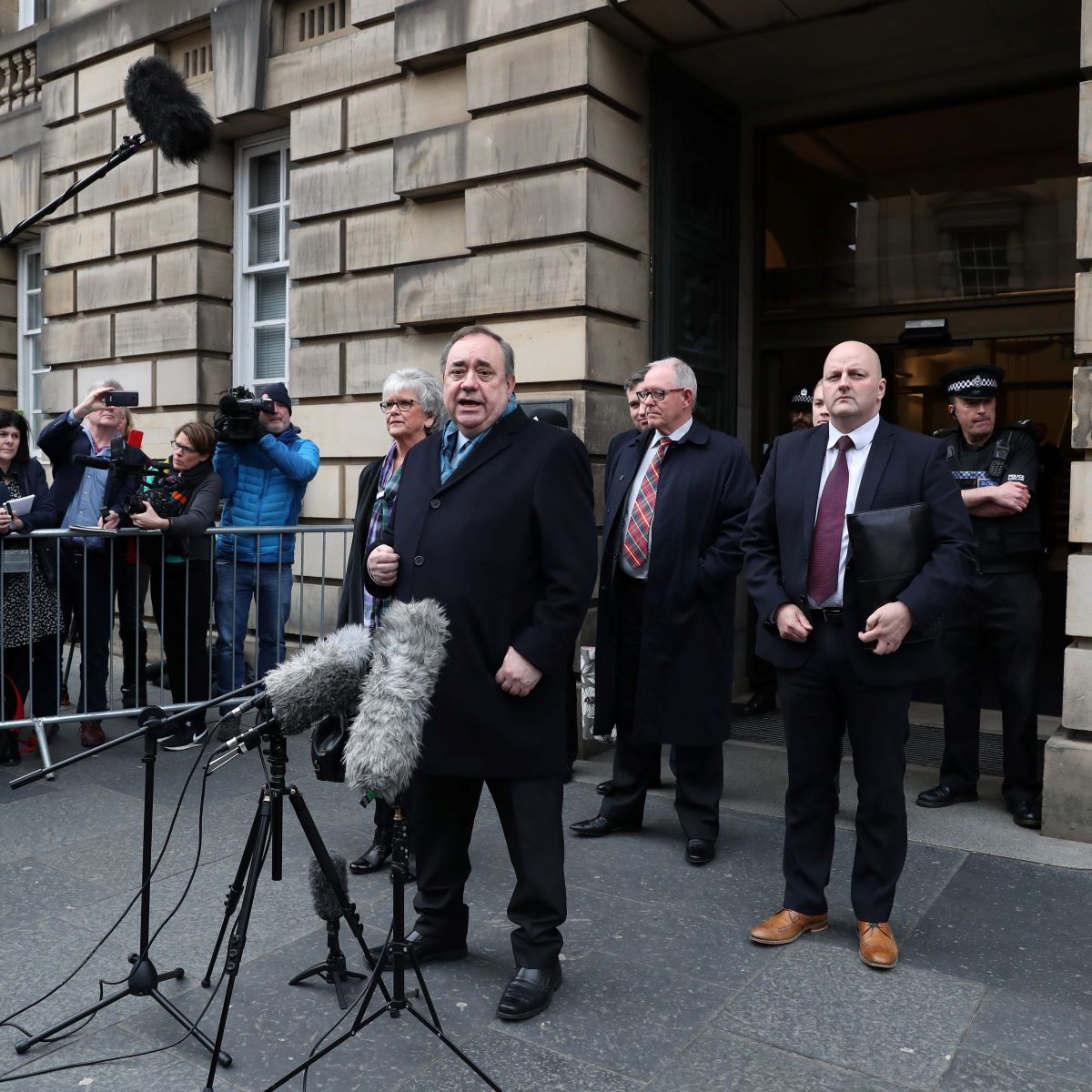 Alex Salmond speaks outside the High Court in Edinburgh after he was cleared of attempted rape and a series of sexual assaults, March 23 2020
Andrew Milligan/PA Wire/PA Images

For the moment, understandably, politics is suspended. Parliament is not sitting. Elections due to be held in big cities like London and Birmingham are postponed to 2021. The news programmes are wall-to-wall on medical matters. No one – quite rightly – can be bothered with the future politics of the nation. Brexit is almost forgotten and will be as inevitably there is no chance of a deal being soon agreed between chief negotiators struck down by Covid19 with every functionary in London, the EU’s 27 capitals, and Brussels diverted to the more urgent issue of the year.

One of Britain’s most prominent, epoch-changing politicians, Alex Salmond, has acquitted after a sensational trial. But even in the Scottish press the space given is nugatory.

But will this last?  The Scottish question is poised to explode onto the political stage as soon as the Covid19 crisis dies down. Firstly, there will be an election to the Scottish Parliament in Edinburgh next year. How big will the SNP majority be? Can Nicola Sturgeon improve on her current 61 MSPs out of 129? The SNP needs a a big overall majority to show it has support for its desired second referendum.

Secondly, will Nicola Sturgeon lead the SNP and be re-elected First Minister? The attempt by the Scottish government, with the alleged connivance of its most senior civil servants to destroy Alex Salmond has failed twice in the courts. The first time when his action against the government over its investigation into his behaviour was upheld. And then when the police sought criminal convictions a jury acquitted the flamboyant Salmond who is now a presenter on the Kremlin propaganda TV station, RT. Will he seek his revenge by replacing Ms Sturgeon with a Salmond loyalist like the SNP MP, Joanna Cherry MP?

Third, as the Brexit imbroglio continues into its sixth year since the 2016 plebiscite with serious questions about adding the economic damage of Brexit to the business disaster for firms and workers of the pandemic will the SNP’s claim that southern English anti-European voters should not dictate to Scotland where nearly two-thirds voted that Scotland should stay in Europe find an echo?

Add in the need for Labour’s likely new leader, the North London lawyer, Sir Keir Starmer to improve on Labour’s miserable tally of 23 Labour MSPs if ever Labour wants to form a majority government again or indeed, for Boris Johnson to show he can unite the United Kingdom by winning support in its northern nation and the question of Scotland becomes ever-more important.

On the whole, while every Scot in the London media-political establishment, especially the BBC’s two Andrews – Marr and Neil,  as well as the Glaswegian Laura Kunesburg – opines at length on the state of politics in London, it is strictly forbidden for non-Scots to express a view on what happens north of Hadrian’s Wall.

The Catholic Church in Scotland is seen as close to the SNP. A poll carried out by Lord Ashcroft showed 57 per cent of Catholics voting to quit the UK in the 2014 Scottish referendum. 69 per cent of non-Catholic Christians voted to keep Scotland in the union.

To be sure, Scotland is secular, but anyone who has glanced at a Celtic-Rangers match can see how deep religious affiliations can be.

The 2021 electoral politics of Scotland will be followed closely in Europe. The SNP proclaims itself a social democratic party. That may be true in its public spending policy but in modern ideological terms it is one of the most revolutionary parties in Europe.

Its goal is nothing less than the destruction of the British state as presently constituted. The SNP’s means are peaceful and law-abiding but its revolutionary goal should not be downplayed. In 2014, Pope Francis said: “All division worries me. There is independence by emancipation and independence by secession” adding that while the sundering of Yugoslavia into seven much smaller states “is very clear but I ask myself if it is clear in other cases – Scotland, Padania (northern Italy) or Catalonia?”

The rise of nationalism and secessionism in Europe threatens the unity of the European Union. All of Europe will have eyes fixed on the Holyrood election in May 2021.

Most Scottish intellectuals, writers, artists, academics and go-with-the-flow Labour and Lib-Dem politicians have let their dislike of 1980s Thatcherism or more recently the anti-European ideology of Boris Johnson dictate support for Scottish identity politics even if not always support for full-on secession.

Now John Lloyd, a long-standing Financial Times correspondent and co-founder of the Oxford-based Reuters Institute for the Study of Journalism has written a well-researched and powerfully composed book, "Should Auld Acquaintance Be Forgot" against Scottish secession. It is an unrelenting polemic.  Lloyd digs into Caledonian Anglophobia and comes up with Hugh MacDiarmid, the legendary Scottish poet, writing “Is a Mussolini or a Hitler/ Worse than a Bevin or a Morrison?” (two Labour ministers in the wartime cabinet).

More recent denunciations by Scottish writers Lloyd quotes of the “English” are venomous. They read worse than the worse Europhobic hate language of the last decade, worse even than words used by opposing sides in the Israeli-Islamist conflict in the Holy Land and their partisans in the West.

It is unclear if Lloyd’s sustained hostility to the SNP will cut it in Scotland or in his home town of Fife now represented by an SNP MP. The once giant Scottish figures of New Labour are now yesterday’s men.

The Sturgeon and Salmond factions of the SNP are masters of all they survey. But will this translate into enough votes next year to justify a Scottish government with a large enough majority in Holyrood to ask for a second independence referendum? Will a big majority English Tory government permit it? And if so, which side would win?

If the Europe question dominated our political life in the last decade, stand by for the Scottish question to take over.

Denis MacShane was born in Lanarkshire but grew up and was educated in England. He was a Labour MP for a Yorkshire seat and is a former Europe Minister. His latest book is Brexiternity. The Uncertain Fate of Britain published by IB Tauris-Bloomsbury