Do we have anything at all to be grateful for during the Covid-19 pandemic?

An expert in social care urges churches to speak out, warns: 'What about the next time?' 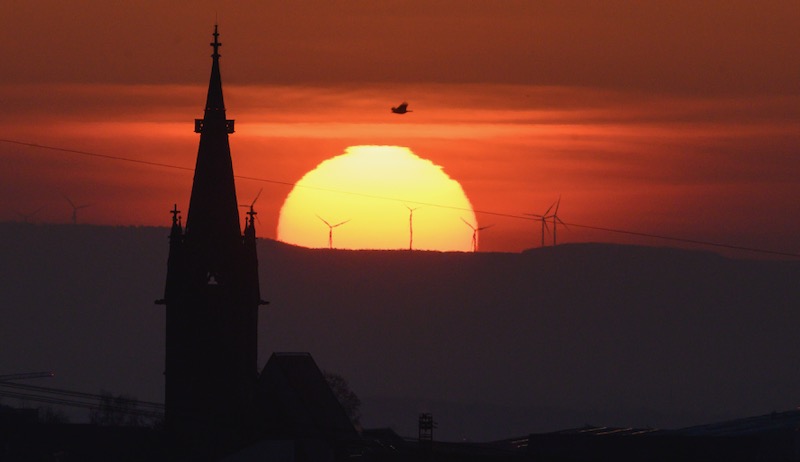 The sun rises behind a church on the Filder plain, Baden-Wuerttemberg, Leinfelden-Echterdingen.
Sebastian Gollnow/DPA/PA Images

As a graduate student I was expected to write essays on global health security. Typically we looked at the Dustin Hoffmann film, Outbreak, where a diseased monkey is smuggled as a pet into the US triggering a traumatic health epidemic.

We logged the growing reality of zoonosis. Zoonosis is when a disease is transmitted to humans from animals. It is not new. UK agricultural workers, for example, typically carry antibodies to all sorts of diseases that so far rarely get beyond farmyards. Lord Coe once had debilitating toxoplasmosis which is found in cat faeces.

Luckily for us in the West, and unlike Madagascar, Sierra Leone and the DRC the plague and Lasa fever have not yet been carried into our food chain by rodents forced out of the woods by flash fires and environmentally damaging logging. Covid-19, though, has broken beyond some kind of animal-human interaction in mainland China. It has begun its international journey of death and destruction. And yet at this time of crisis the Churches are falling quiet.

Church leaders do not think of themselves as inactive of course. They have celebrated having their "largest ever", albeit digital, congregations. They have lit candles. They are mobilising practical assistance from congregations, even if they are amazed at how quickly the NHS can find 500,000 volunteers without a biblical exhortation. But in these broad gestures, details of grave significance are being missed.

That the Coronavirus Act could be adopted in the UK parliament with so little critical engagement from the Lords Spiritual is gravely concerning.

It shortcuts key parts of the protective measures in the Mental Health Act and gives local authorities the right to withdraw social care from our most vulnerable citizens for up to two years.   Even if it could not have been amended this Act should have been qualified by powerful protective rules laid down by Ministers.

As I have argued on Conservative Home,  however, combined with two weak attempts at "guidance" on who should be refused critical clinical care from the National Institute of Clinical Excellence, it is an Act that creates the conditions for those with disabilities, depression, having a lapse in their dementia or who have temporarily not had access to regular medication, to be pushed right to the front of the queue when medics come to decide who will not get support as beds become scarcer.

Over Brexit, Parliament refused to let itself be closed. In the face of the altogether more significant Covid-19 it has walked away with hardly a whimper, nor an audible word of caution from major church figures.

Unlike in New Zealand where a cross-cutting super Select Committee has been created, no national adequate structure of scrutiny has been put in place. At local level NHS equalities, quality and assurance systems are being diluted. The rallying call on so many hospital corridors has already become "now is not the time for questions…we can consider all of that afterwards".

But we cannot, because as carers of vulnerable family members already know, medics make mistakes at the best of times.

We are now learning that unaccountable, opaque, impersonal, highly devolved  (over stretched, exhausted, partially qualified)  "medical expertise" has in Spain become the legitimation for all sorts of decisions that shock.

US Church leaders said nothing when President Trump, upon election, severely cut funds to the main American body charged with resourcing global health work. British faith leaders have only just noticed people with disabilities and mental ill health and have yet to make any acute intervention on the inter-relatedness of our health with that of citizens in low and middle income countries.

Smart Cardinals, Bishops  and Archbishops the world over might have noticed all this sooner if they had studied in more detail what the Gates Foundation and Rotary International achieved with so little ecclesiastical or government assistance. Now they can urgently make amends by, with others, bringing forensic attention and accountability to the operation, planning, and delivery of so much emergency activity.

Some Church leaders, of course, think the social sciences, medicine, logistics, detailed monitoring  and the gifts of skilled manufacturing that will bring us new equipment and scrutiny are mere distractions when compared to the "Queen of Sciences",  or an undermining of  a Christian narrative  of engagement so pure as to be above all others.

Others will prefer to stay silent, hidden in prayer, lest their attempt to give voice to vulnerable families and their carers be misinterpreted. In an emergency election after a war they would know what to do. Now, during a health emergency with grave risks to the weakest they need to be as pro-active. It is not that we do not wish to rally to support the government. It is that we must all be able to look each other in the eye after the peak of the pain.

The detailed choices of who will survive this, first, major zoonosis driven pandemic will define us for generations.

This comes a decade after my graduate class all wrote, that the reality of animal to human transmission of disease would mean several such outbreaks and not just the one.

If the churches and others stay silent and scrutiny is closed down the first time round it will not be any easier when the next time comes.

Francis Davis is Professorial Fellow in the Institute of Population Ageing at the University of Oxford, a former NHS Non - executive director and the co-founder of several social care charities. He is a volunteer at Corona Older.

Comment by: Michel
Thank you for being clear and loud about it - thank you for speaking out the thoughts of the people of our Church !!!