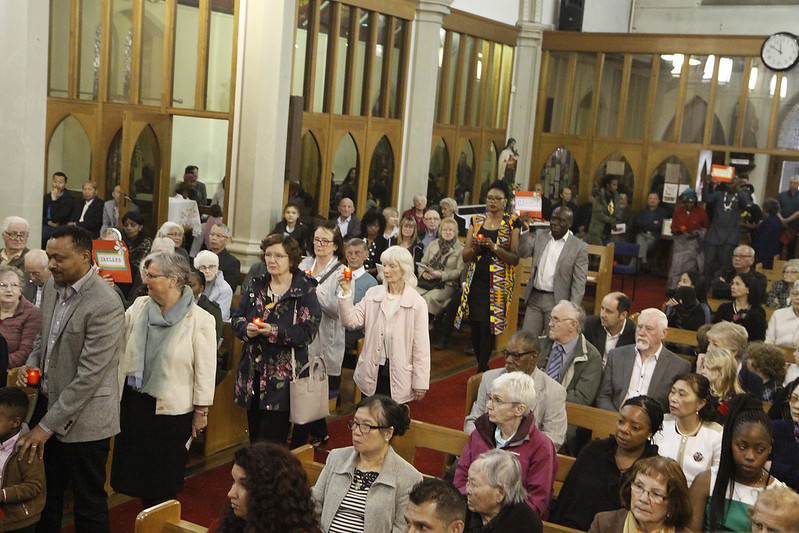 The pioneering work of one diocese in Catholic social mission

A tale of two conferences: bishops and the abuse crisis in Germany and the US

Cardinal Reinhard Marx of Germany, and Cardinal Marc Ouellet, prefect of the Congregation for Bishops, at the Amazon synod
CNS/Paul Haring

On 12 November last year the US bishops were told at the start of their plenary by then USCCB president Cardinal Daniel N DiNardo that they would not after all be discussing proposals they had already drawn up to deal with the sex abuse crisis, that they were expecting to be at the top of the agenda. .

The proposals outlined standards of episcopal conduct and the setting up of a special commission for review of complaints against bishops for violations of these standards. The Vatican heard about these proposals and intervened to thwart any discussion.

Allegations in a new book by Austen Ivereigh that the proposals were aimed at undermining Pope Francis, and the US bishops’ subsequent denial of these allegations, have resurrected debate about what happened in Baltimore a year ago.

There will no doubt be further discussion of these events in the US bishops 2019 plenary starting on Monday, but ahead of that plenary it is interesting to compare the Vatican’s response to the US proposals with its responses since then to the German bishops’ attempts to deal with the catastrophic fall-out from the abuse crisis in Germany.

The plan was drawn up by Mgr Brian Bransfield, the General Secretary of the US Bishops’ Conference, and Mgr Ronny Jenkins, the Dean of Canon Law at the Catholic University of America.

At the heart of the sudden shift at the start of 12 November 2018 plenary, when the bishops were instructed not to vote after all on the Bransfield-Jenkins proposal, was the question of what to do about bishops implicated in abuse or cover-up of abuse: should there be a new code-of-conduct for bishops and should a lay-led commission to help judge the bishops? The Church was reeling from revelations associated with the behaviour of former cardinal Theodore McCarrick, and facing avalanches of allegations across the country, so there were strong voices in the conference who felt an element of lay judgment was necessary to start to restore the credibility of the Church.

However, Rome decided such proposals breached laws and traditions stating bishops can be judged only by the Pope.

Francis told the bishops: “You lack credibility because you are divided,” and told them to postpone any discussions until after the abuse summit, which took place in Rome on 21 to 24 February 2019.

After that summit, on the plane back from Morocco on 31 March 2019, Francis told journalists that US bishops had adopted a mentality of a self-governing congregationalist church detached from Rome. “The Church is not congregationalist, it is the Catholic Church where the bishop must take control of this as the pastor,” the Pope said. "The Pope must take control of this. And how should he do this? With disciplinary measures, with prayer, with penance and with self-examination.”

Francis’ approach here contrasts with his later response to proposals of the German bishops, who have devised a synodal procedure starting next month to deal with the crisis in the German Church precipitated by the “tsunami” of abuse revelations, and who were earlier last year divided over intercommunion, that is allowing non-Catholic spouses of Catholics to receive the Eucharist.

On 4 May 2018 the Prefect of the Congregation for the Doctrine of the Faith, Archbishop Luis Ladaria explained that Pope Francis “appreciates the ecumenical commitment of the German Bishops and asks them to find, in a spirit of ecclesial communion, a possibly unanimous result.”

Arguments in the conference continued for some weeks but following a meeting with Pope Francis on 11 June, the President of the German bishops’ conference, Cardinal Reinhard Marx, issued a statement saying “pastoral dialogue and discernment are at the heart of the ecumenical quest for the sharing in the Eucharist in inter-denominational marriages”, and the row died down.

This year the tension between the pressure to “go it alone” on the one hand, and to stay within the bounds and norms of the universal church on the other, surfaced again in the German Church. The bishops were devising a “synodal procedure” to deal with the fall-out from the abuse crisis, that was again dividing the Church internally and threatening to put it at odds with Rome.

On 29 June Francis wrote a letter addressed to “The Itinerant People of God in Germany” in which he praised German Catholics’ efforts at church reform, but warned them to remain in union with the World Church, and focus on evangelisation.

But the push for lay involvement to deal with abuse was strong. The millions-strong Central Committee of German Catholics (ZdK) met with leading bishops in Fulda on 13 and 14 September after which ZdK president Thomas Sternberg recalled that the German Church’s abuse study of 2018 had shown there were systemic problems in the Church which had fostered abuse and “obscured the credible proclamation of the Gospel message”. In other words, the Church’s record on abuse was standing in the way of the evangelisation that Francis wanted it to focus on.

The Prefect of the Congregation for Bishops Marc Ouellet had already written on 4 September that the draft of the synodal procedure that he had seen could “violate canonical norms”. The German bishops’ conference president Cardinal Reinhard Marx responded to Ouellet, according to the Frankfurter Allgemeine Zeitung, saying: “I cannot see why questions on which the Magisterium has ruled should be barred from any debate.”

The vicar-general of Essen, Fr Klaus Pfeffer, told katolisch.de: “Rome has obviously not yet understood in quite how great a crisis the Catholic Church, not only in Germany but worldwide, finds itself.”

Since then the statutes for the two-year German synodal procedure for church reform, due to begin in December, have been published. Sixty-nine bishops, 69 members of the ZdK and 82 further members who do not belong to the ZdK – from the religious orders and representatives of the new movements of young Catholics – will discuss key church issues. Resolutions which affect the World Church as a whole will be forwarded to the Vatican as a “German synodal procedure vote”.

Within this tale of two conferences, it is possible to discern different responses within the conferences to the same global abuse crisis emergency, and different approaches to their dealings with Rome. The conferences might also discern variations in the respective responses to each conference from Rome.