Martha is busy in the kitchen while Mary forsakes worldliness to sit at her teacher’s feet. 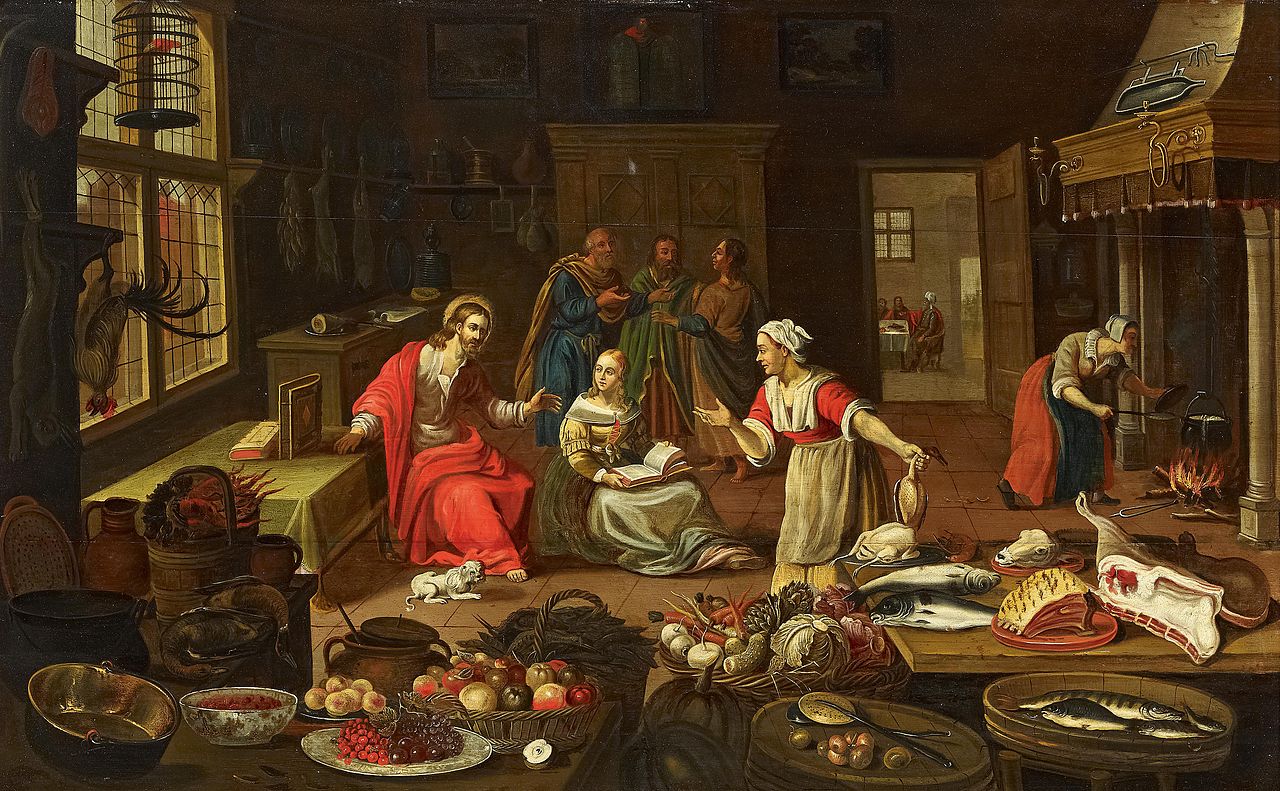 Georg Friedrich Stettner: Christ at the home of Martha and Mary
Public Domain/Wiki

A dispute has broken out in the letters pages of The Tablet. Not about Communion for divorced and remarried people, or women’s ordination, but about two words in Luke’s account of Jesus’ visit to the home of Martha and Mary. In Luke 10, Jesus apparently upbraids Martha for busying herself in the kitchen. Her sister, Mary, has chosen the better part, forsaking worldliness to sit at her teacher’s feet. Typically this is preached as Jesus urging contemplation over action; spirituality over worldliness, silence over noise.

But there are actually two versions of this verse, and the translation you use will determine the way you approach this passage. The first version has Jesus telling Martha that she is worried and anxious about many things, “but one thing is necessary” [enos de estin creia]. This version appears in the oldest papyri (p45 and p75, both from the early third century); it is preferred by scholars and appears in the English Standard Version [ESV] and its family of bibles [the RSVs]. A second, longer version reads: “Few things are necessary, indeed only one” [oligon estin creia, e enos]. It appears in Codex Vaticanus and Codex Sinaiticus [both fourth century] and is preferred by the Jerusalem Bible (the translation used in the lectionary) and its Revised edition, published this year [the RNJB].

Listen to our latest podcast, where home editor Liz Dodd talks about this controversy around the Revised New Jerusalem Bible, and what Jesus really said to Martha when he visited Mary and Martha.

This translation, Professor Eamon Duffy, of Magdalene College, Cambridge, writes in a letter to The Tablet, is typical of the Jerusalem Bible’s “casual inaccuracy” compared to the ESV. This is an important endorsement from an eminent historian: the ESV and the RNJB are both competing to be used in the new lectionary for England and Wales. But as Dr Sarah Parvis (Edinburgh) retaliates in this week’s letters pages:  “If Professor Duffy, as the great Reformations scholar he is, wants to advocate the ecumenical merits of reading from a low-church evangelical Protestant translation of the Bible during Mass in England and Wales, I would be very interested to see the case he would make, but he is mistaken in believing the English Standard Version is a more accurate translation than the RNJB.”

And when it comes to the story of Martha and Mary, she’s right. The ESV - and traditional scholarship’s - preference for the shorter version of v42 is based on erroneous citations from Church Fathers, specifically Origen, that were then adopted by the influential United Bible Society’s translation committee. The UBS argued that scribes inserted “few” to soften Jesus’ words: this excellent article in the Journal of Biblical Literature by Tommy Wasserman makes the convincing argument that based on modern patristic scholarship it’s much more likely that the longer version was original, and the phrase was sharpened and shortened as Church sought to use the verse to support the growth of contemplative monasticism.

Actually, Wasserman argues, some scholars think Jesus isn’t loftily pronouncing on the merits of contemplation at all: he’s probably still talking about the dinner. “Martha,” he’s saying, “you don’t need to turn out a five course banquet. A sandwich will do.” This sounds wilfully contemporary, but had weight among the Church Fathers: it’s the preferred interpretation of Basil of Caesarea and Cyril of Alexandria, for example, who says Martha is criticised not for serving but for “wishing to procure more than was necessary”.

The more accurate translation in the JB opens up a world of interpretative possibilities. As Cyril indicates, Jesus prefers simplicity to wealth. He honours Martha’s service – the Greek word is diakonein, the root of our word deacon. He doesn’t drive a wedge between the women, or between action and contemplation – another textual variant in verse 39 has Martha sitting at Jesus’ feet as well before she gets stuck in the kitchen. So this isn’t a story about work versus faith, action versus contemplation, service or submission, or the place of women: it’s a story about excess – excessive anxiety, or wealth, or control.

Professor Duffy is right that the translation is typical of the JB, which prefers to translate the sense of the original text instead of offering a word-for-word equivalent (dynamic instead of formal equivalence). The ESV, by contrast, prefers formal equivalence – as close to a word-for-word rendering of the Greek as possible. But in striving for this accuracy, it makes mistakes, as the case of Martha and Mary makes clear. Which version of the Greek is correct? Whose interests does it reflect?

Obsessing over formal equivalence won’t resolve the mistakes and biases of the early scribes. In fact, it often obscures them, rendering passages less “accurate” overall because the Greek often isn’t gospel. The JB at least wears its bias on its sleeve notes: it prefers dynamic equivalence, it strives for inclusive language; it scours Church history and tradition, not lexicons, for meaning. It does for the 21st century Church what the scribes of the second and third century did for early Christians. As the bishops of England and Wales continue to deliberate over which translation to use for the lectionary, they might look at the story of Martha and Mary – in its longer version – and recall that sometimes, being dynamic is better than being static.