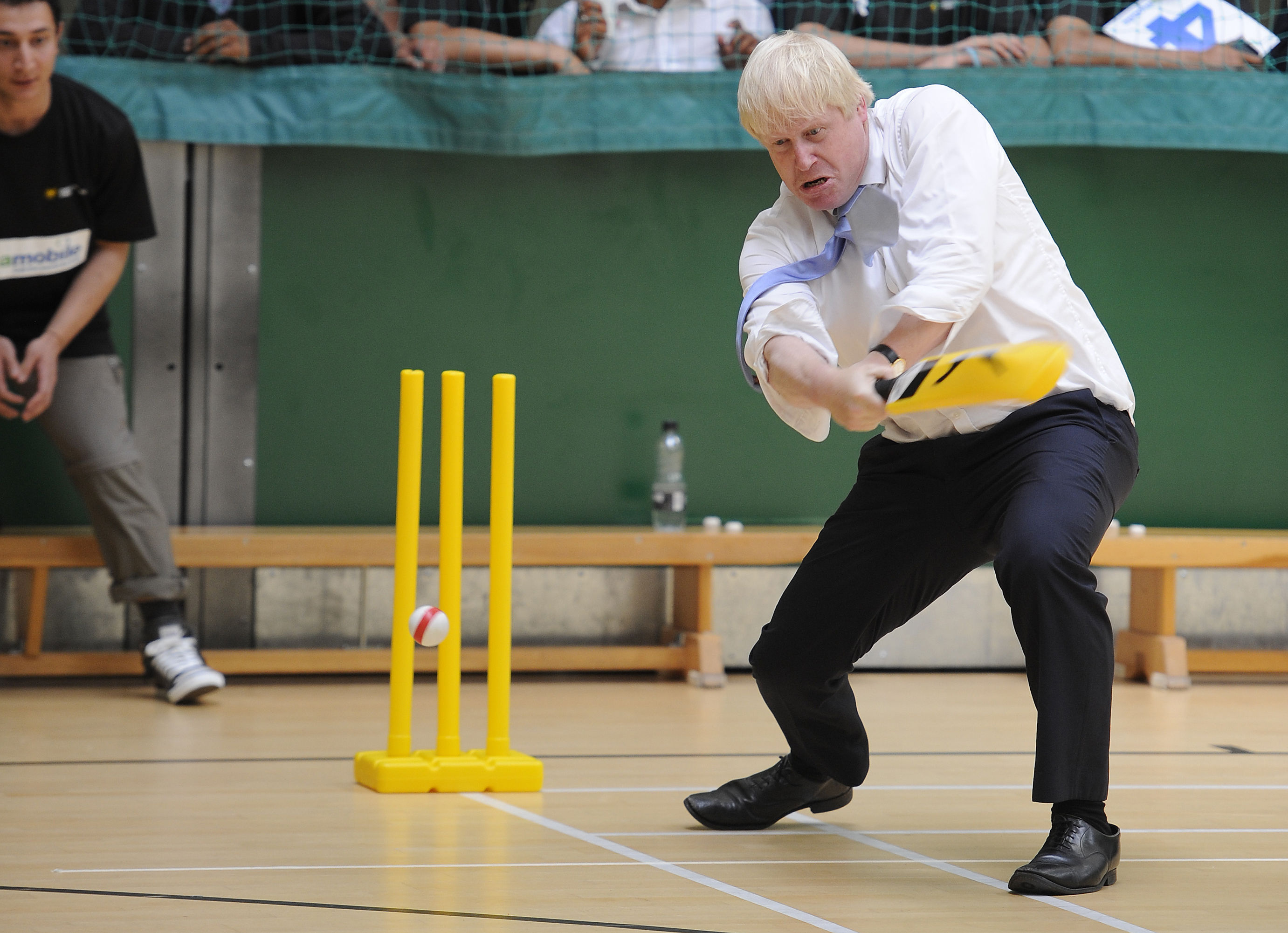 Brexit and Boris: weird and getting weirder

How you can enjoy a game of crazy golf with Jesus

Has Rochester Cathedral scored a 'holy in one' with its latest installation in the nave? This writer is crazy for it 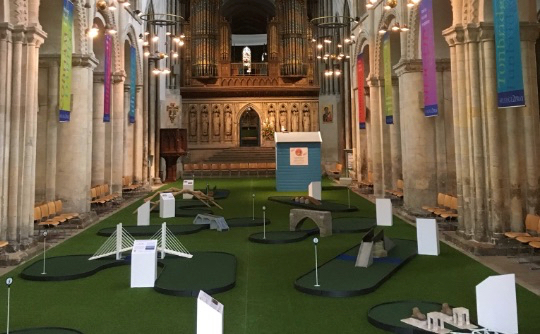 There is a giant screen at Rochester Cathedral that monks used to close when rioting villagers threatened to storm the monastery. Were it still operational, staff at the Cathedral might consider walling themselves in again, this time to repel the commentators outraged by the installation this week of a crazy golf course in its vast Norman nave. “What an embarrassing shambles,” tweeted Fr David Palmer, who was ordained there. “St John Fisher, Bishop of Rochester, went to his death rather than watch his cathedral fall into the hands of greedy iconoclasts,” wrote Catholic commentator Damian Thompson. “I suspect he would rather see it lie in ruins than experience this fate.” Fr Ray Blake warned: “When you reject Christianity what is left: crazy golf.”

You might think that the Cathedral had opened a money changing booth at the high altar, instead of an installation designed by a local charity to educate people about local history and encourage schoolchildren – particularly girls – to take STEM subjects like maths and engineering. Despite the outcry from Catholic commentators – “This sucks, give us our church back”, tweeted Catholic journalist Dawn Foster (a regular Tablet contributor) – Anglicans have very different rules governing what can take place inside a church. Broadly speaking, this is because of Catholic belief in the Real Presence. They still have to obtain a faculty, or permission, for certain things, and that process is tightly controlled. But it means there is flexibility for worthwhile projects to find a home in the church – soup kitchens, homeless shelters, Alpha Courses. The “golf course”, whose holes are fastidiously accurate models of bridges, not garish windmills, surely falls under this category.

Besides, anyone who envisages big Anglican cathedrals as silent spaces entirely turned over to prayer and reflection hasn’t visited Canterbury, St Paul’s or any of the Oxbridge chapels during the summer holiday season. Rochester has actually done a very good job of preserving spaces for silent prayer: away from the nave and up its worn pilgrims steps, behind the organ screen, its two vast transepts house secluded, candle lit chapels and shrines that are almost certainly quieter than they were when the Cathedral was at the centre of the Medieval pilgrimage industry. Indeed, critics’ halcyon vision of churches and cathedrals as silent, sterile houses of prayer is historically inaccurate: naves were typically a sort of market-slash-social space, where pilgrims and parishioners traded prayers and gossip. Old St Paul’s, for example, the medieval cathedral of the city of London, was the City’s social hub: its nave, “Paul’s Walk”, was an actual marketplace. 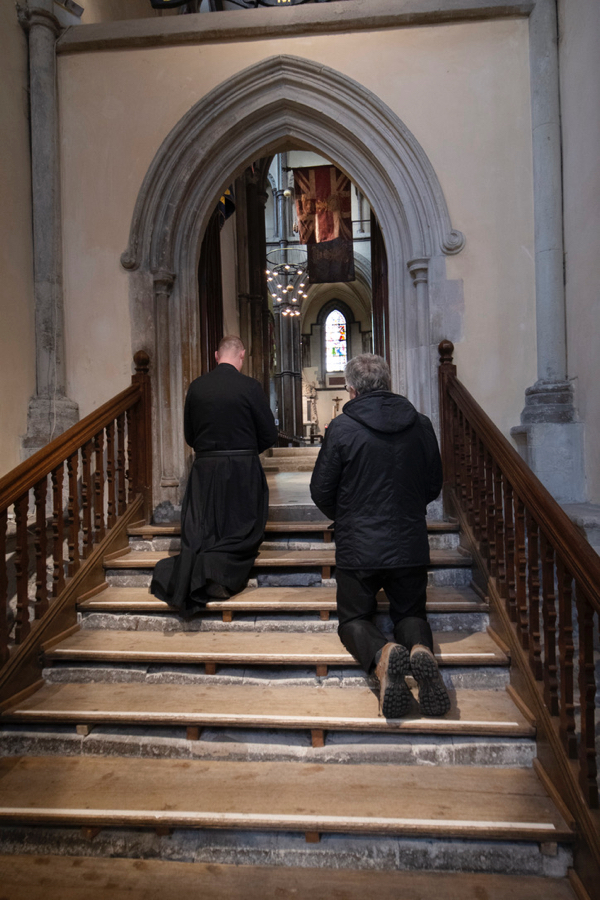 Sacred, quiet space can still be accessed at Rochester via the pilgrim steps, seen here with Canon Matthew Rushton on the left. Pic: Ruth Gledhill/The Tablet

At the heart of the visceral reaction to Rochester’s golf course seems to be the nature of sacred space. When I last visited Rochester, it was at the start of a 70-mile pilgrimage across Kent in the footsteps of St Augustine. I received a blessing at its High Altar (undisturbed by the group of school children dressed as knights who were tearing around the nave behind me) then set off across the North Downs, roughly following the old Pilgrims way to Canterbury and the sea. Every day the road wound past exquisite little village churches – masterpieces of the Gothic Revival, Norman chapels, churches whose porches had been graffitied by crusaders. Because I was walking during one of the hottest weeks of the year, I ducked into every one to enjoy a few minutes of shade. At first, Catholic hangups about sacred space made these pauses a bit uncomfortable: even when the churches were empty I’d sip water guiltily in the doorway, or sit in a pew at the back deluding myself that I was there to pray, not to soothe my aching feet. Then I got bolder: I might check my map, or read a guidebook. Soon, at around the twentieth church, I was chomping cereal bars with abandon, Instagramming from the pews. Sacrilegious? It didn’t feel it: I left feeling rested; grateful. Any final qualms I had were put aside when I spent the night “champing”: camping in a church maintained by the Churches Conservation Trust, in Fordwich, at the lovely church of St Mary the Virgin. It was an extraordinary night: I gradually relaxed into my surroundings (cold, full of dead people), slept soundly on a camping bed in a box pew, and in the morning I drank my coffee and said my prayers with my back against the altar rail, in a patch of warm sunlight that streamed through the stained glass window. It didn’t feel blasphemous, it felt intimate.

If it took me that long time to feel at home in my father’s house, no wonder so many of my non-Christian friends hate visiting them. Churches are intimidating for people who don’t grow up around them: are hats ok? Can I take photographs, or walk over here, or check my phone? Do I have to whisper? Am I allowed? What a shame, given that the whole purpose of church is to bring people into contact with Jesus. Jesus, who loved parties and festivals and feasts; wells and weddings; and who hated empty traditions and rules that drive people away from God. He can meet people just as easily on a crazy golf course as he can in a cloister, and he is in Rochester, waiting to welcome everyone driven away from church by fustiness and legalism.

Listen to Liz Dodd discuss the golf course at Rochester on BBC Radio (about 50 minutes in).