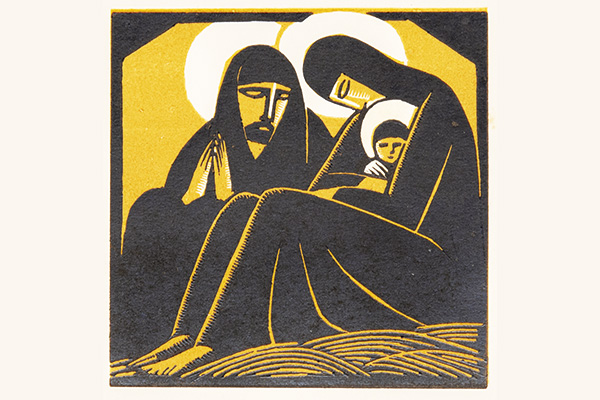 In May last year, curator Claire Marsland received an email from a Benedictine: would Marsland, the sister asked, be interested in coming to look at some work by a nun who died three decades ago, in her nineties, and who had designed priests’ vestments as well as being a painter, carver and printmaker?

Marsland said she would, and last summer she and Durham archaeologist, Dr Mary Brooks, visited Stanbrook Abbey at Wass, near York, to look at the legacy of Dame Werburg Welch. “I’d never heard of her up to that email,” says Marsland. “I later discovered that when her work was referred to in art catalogues or journals, she was identified only as ‘a Benedictine at Stanbrook’, and never by her own name.”

What Marsland found, in the storeroom at Wass, blew her away. There were copes and chasubles, dalmatics and albs – and what made them so stunning were the colourful, intricate, hand-embroidered motifs and designs, some figures, others graphics. There were references to Byzantine, Egyptian and other cultures; and ideas rarely or never executed in religious art before, such as the placing of the figure of Adam at the foot of the Cross; and on a crucifix carving, Welch had blood flowing from Christ’s side into a chalice on the ground.