Benefit of the doubt

Around the world in 80 faiths 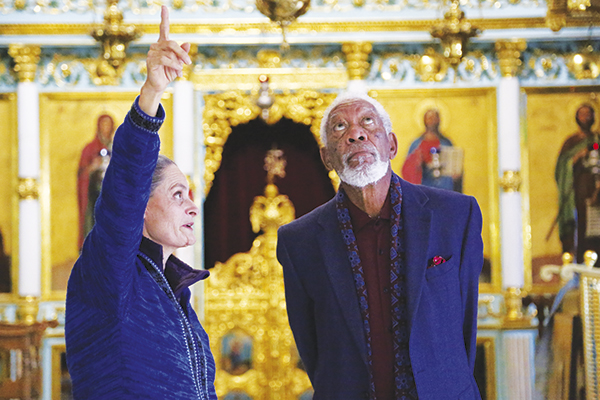 What does Morgan Freeman’s new series deliver beyond a glossy travelogue?

Who is the Devil? Where do visions come from? And can performing rituals bring us closer to God?

These are some of the questions Morgan Freeman’s new series, The Story of God, on the National Geographic channel promises to answer. It’s the third season of the Emmy-nominated series, and it sees the US actor criss-cross the globe, as he goes on an interfaith journey taking in cities including Jerusalem, Kathmandu, Jericho, Rome, Bethlehem, Paris, Prague, Hanoi, Toronto and Lourdes. The series’ producers brag that they’ve logged more than 50,000 miles in total (that’s twice round the world), and that they’ve met with religious experts including priests, druids, shamans, an imam, a rabbi, a nun, two living goddesses and many monks.

It’s a beautiful concept – and, this being the National Geographic channel, The Story of God recreates for its millions of viewers a moving, speaking version of the sumptuously glossy articles that decorate National Geographic magazine. The series is a lavish feast of ethno-curiosities in full technicolour. There are aerial shots, lush topographies, quaint and not-so-quaint customs and rituals, gauzy dramatic recreations, gorgeous local costumes – and all of these to the accompaniment of a deafening orchestral soundtrack that swoops and soars.